Got some disappointing news today.

I logged onto my kingrandor YouTube account and saw a message that my account had been terminated because of several copyright claims put forth by World Wrestling Entertainment. I got one from TNA about a month ago (again claiming I used their video content without permission). I deleted that video from my account and my YouTube status was back to normal.

Well, WWE hit me with five copyright claims over the past two days. I’ve been busy and hadn’t logged into my account for a few days. YouTube terminated the account and, well, that’s that I guess. 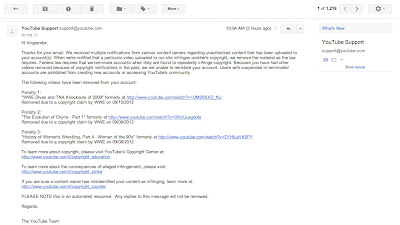 I’m sure this probably has something to do with the fact that, in the last year, WWE entered into a deal with YouTube to provide original content to them on the official WWE YouTube page. WWE has finally jumped on the social media bandwagon, as is evident by the constant social media plugs on any of their current programming.

It’s just a shame that fans, like others, and myself get the short end of the stick. I’ve been uploading music videos since 2004, each one featuring various wrestling content from a variety of televised promotions, and it’s just now, when they want to make money, that WWE decides, ‘That’s not okay,’ for me to do.

I used clips from the dozens of years of programming and video content that exist. See, I’m one of those hardcore fans.

I taped hundreds of episodes of Raw, Smackdown, Nitro and ECW, starting back in 1997 when I first became a fan. I purchased several pay-per-views and then, in addition to that, I bought those same pay-per-views in VHS format. When WWE switched to a DVD format in the early 2000s, I purchased those as well.

After I got my Mac in 2003, I thought it would be a good time to convert the home-recorded video tapes to DVD. I captured the VHS footage using eyetv . I figured, if the VCR ever went out of style, I had my hundreds of hours of wrestling to watch on a DVD player.

Then, in 2008, I set up my kingrandor YouTube account. I was taking a social media class in college and we were required to publish some journalism videos to YouTube.

I tried to arrange the clips in a way that meshed with the music that I chose, and then I published the video to YouTube. A few people commented on it. I made another. Then another.

That was in the good, old days of YouTube, when there weren’t any copyright claims on music or video content.

Little by little, my kingrandor channel developed into a little community, with over 700 video subscribers and close to 1,040,000 views. A few other YouTube users posted my videos on their own channels, getting over 250,000 views of their own.

I developed a style of my own – a music video meets documentary feel. A lot of my subscribers gave me positive feedback on that and sent requests for me to make videos on certain wrestlers.

In the last four years, companies, one by one, have put their foot down on YouTube content.

Their stance seems to be: ‘People can’t just put our video content and our songs on YouTube without us being compensated for it. They’re fans of our product? Who cares?! We need to make money!’

Now I get that companies have to make money. If I was taking money out of WWE’s pocket with any of my videos, I could understand them putting a copyright claim forth. I take photos in my spare time and I’d be upset if someone was selling them, profiting off of the work, the time, and the effort I put into them.

I wasn’t doing that though. I didn’t take their DVD releases and put them directly on YouTube in multiple parts, like some people do.

I took bits and pieces from years of wrestling footage that I recorded, put them together into 10-minute documentary-style pieces, and added some music. Using all of those elements, I tried to tell a story.

Videos from WWE’s official YouTube account showed up in the ‘Related Content’ section of my uploads, so they were very likely getting views after people got done watching my video.

I never chose to monetize my account (despite several e-mails from YouTube telling me I could do so). I figured since I was using footage aired on WWE and TNA programming, it wasn’t right to be profiting off of it. It was simply a way for me to practice my video editing skills on something I enjoyed.

In the end, my account still got deleted. For what – because I used some footage that aired on national television?

I guess that’s how the current copyright law works.

Personally I think it’s absurd and, in the end, it only hurts WWE itself. It just doesn’t make sense to me. Fans are providing free promotion for WWE and TNA by uploading music videos to YouTube. It’s free advertising!

That’s how it goes, though.

I want to thank all my subscribers, and all the people who helped my 88 video uploads reach the 1 million views mark. It was a fun ride while it lasted.


The download link for "These Are The Days," one of my videos that no longer has a place in cyberspace:
http://www36.zippyshare.com/v/98532073/file.html

Posted by Batson at 4:46 PM No comments: