There were some pretty brutal critic and viewer reviews of it last year. The movie also didn’t do very well at the theatre. BoxOfficeMojo shows that it made close to $59 million. Unfortunately for Columbia Pictures, the production budget was $125 million.

It’s not actually that bad of a movie. It’s not good, but I’ve seen worse. Granted, I’ve never seen the original.

This film is a remake, so it was already likely at a disadvantage with most fans of the original film.

On paper it probably looked good. Colin Farrell, Kate Beckinsale, and Jessica Biel star in the movie. Three decent actors with decent resumes behind them. It just didn’t work though.

The movie starts off with Farrell and Biel running away from what appear to be Storm Trooper-like robots. Biel ends up reluctantly getting away, while Farrell’s character is captured. He wakes up in the middle of the night, in bed, with Kate Beckinsale. It was just a dream, or was it?

Set at the end of the 21st Century, after a global war left much of Earth uninhabitable, there’s two territories, controlled by two different agencies.

The United Federation of Britain (UFB) is in charge of the European area. The Colony is the group that controls Australia.

There’s supposed to be some kind of struggle for power between the UFB and the Colony, yet many people who live in the Colony travel across the planet to work at factories in the UFB territory. 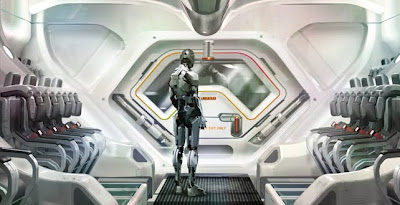 This journey is completed each day by using “the Fall – a kind of gravity shuttle that can carry thousands of people.

Problem #1: if there’s a struggle that’s ongoing, why are the two groups connected with this transportation system?

The premise is that factory worker Douglas Quaid (Farrell) feels unsatisfied with his life. He feels like he was meant to do something more.

His wife, Lori (Beckinsale), tries to make him happy. His friend, Harry (Bokeem Woodbine), tries to convince him there’s no reason to feel unhappy.

Still, Quaid still can’t shake that feeling. When he sees an advertisement for Rekall, a device that can give you artificial memories, Quaid can’t resist. He thinks maybe it will be the key to deterring his unhappiness.

The people at Rekall say they can offer up any kind of memory he’d like. There’s just one catch: there can't be any truth to his made up memory. In other words, if he's a teacher in real-life, then he can't use the memory program that makes him a teacher. The brain just gets too confused. 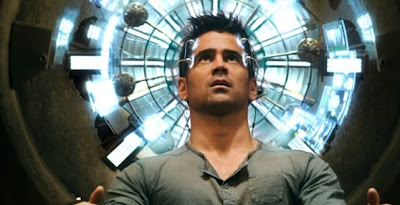 As he’s in the chair, the Rekall administrator gets angry, telling the assistants to unplug the needles before it takes! Turns out, Quaid is a spy.

Or is he? Is this part of the Rekall experience or is it real? 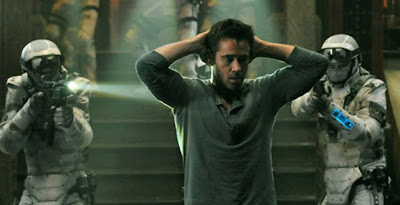 A bunch of the Storm Trooper wannabes show up. Quaid kills over a dozen of them in just a few minutes. He's shaken by this turn of events.

As more backup is arriving, Quaid makes his escape and ends up back home, in the loving arms of his wife. 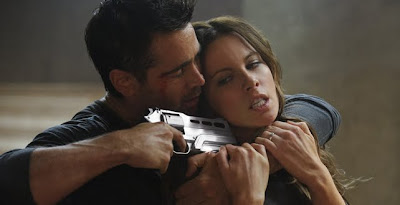 Except....she's an agent too. She starts attacking him, trying to kill him.

Because of the architecture of the buildings in The Colony, the fight scene between Quaid and Lori is probably the best in the movie. There's some roof-top jumping as Lori tries to bring Quaid down.

His memory doesn't really develop much more throughout the film, but the movie progresses from there, with Jessica Biel's character being re-introduced and one of the most anti-climactic car chase scenes ever. 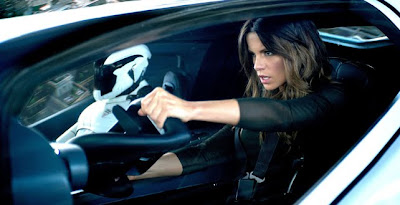 Not too long after this, problem #2 is revealed: there's entirely too much angry Kate Beckinsale in this movie. 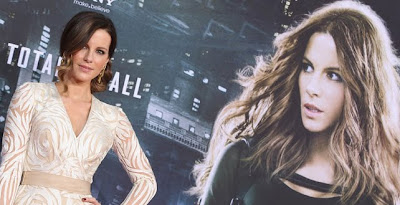 It's appropriate that the promotional poster above was used for the movie because that is exactly what Beckinsale does throughout the movie. She also does a lot of walking -- a lot of angry walking -- down halls, on the street, and in elevator shafts. She tries to back it up, but, in the end, it's basically a bunch of angry power walking.

Quaid finds out that his new/old gal pal, Melina (Biel) is part of the resistance group. 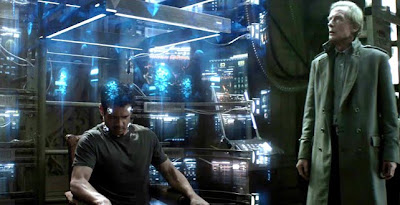 There's politics at play, as Quaid is apparently the guy everyone wants. He's supposed to have some information locked inside his head.

There's a gigantic takeover attempt, some large explosions and some hand-to-hand combat to end the 2012 Total Recall experience.

Problem #3: the ending of this war leaves a lot of unanswered questions. Without a transportation system between the two colonies, how does it affect their lives? Do they have enough resources, on their own, to survive? What about the people who worked late in the UFB and are now permanently stuck there -- not able to get home to the Colony?

Problem #4: this one is just nit-picky, but why was it dark and rainy in The Colony every single day until the end of the movie, when the sun finally broke through the storm? Can you be any more cliche than that? 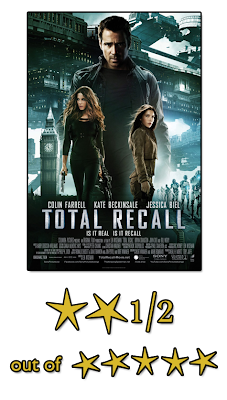 I don't think it was as bad a movie as some of the reviews I've read make it out to be, but Total Recall isn't epic, incredible, awesome, great or even good. It's one of those movies that, in three years, you could maybe watch again as it airs on FX on a Wednesday night.