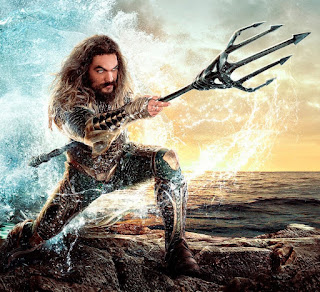 I was really hoping DC's Aquaman would be good. Apparently it did $100 million in China already and is expected to make that much opening weekend in the U.S.

There's even talk of a sequel.

That's great news! Some people are DC and some are Marvel. I'm both. Some are Star Wars and some are Star Trek. Again, I'm both. I want DC and Marvel to do great because that means more movies that are made that I get to watch, enjoy and own.

I went into the theater hoping for the best and walked out very pleased with what I got.

Summarizing it, Aquaman was a great mix. It was Star Wars meets Lord of the Rings starring an underwater Thor with Avatar visuals. Oh, it also had a great soundtrack. It could've very easily been one gigantic hot mess. Yet, it wasn't.

Aquaman captured a lot of the great elements from those previously mentioned movies. The movie featured a Lord of the Rings-style journey. It was a Star Wars-like adventure. The visuals were so dynamic! All kinds of scenery that one can only imagine.

While many compare Thor to Superman due to their similar strength and flying ability and red cape, I think the movie Thor is more comparable to Aquaman. They've got the mythology that is a permanent part of their characters. They aren't aliens from another planet. Their history is rooted in mythology.

Jason Momoa's Aquaman isn't just an underwater Thor though. Momoa was the perfect choice for Aquaman. He's got some good comedic chops. He probably needs to work on his more dramatic delivery, but he's passable in that area.

The tattoos and look automatically gives him more of an edge, which gives Aquaman a much-needed boost of credibility. He was probably one of the more made fun of characters of the past few decades --- probably because there wasn't a great representation of him that was distributed to the masses.

We got a glimpse of his sense of humor in Justice League and it continued on in this solo movie. Momoa's comedy is almost dry.

He has one-liners that aren't necessarily laugh-out-loud funny, but they make you smile and chuckle time and time again.

When you watch it, look out for these scenes: the submarine, the Italy fight scene and the final fight scene. All three had great cinematography, weren't too heavy on the CGI and were extremely creative!

The movie was jam-packed in terms of the story but it didn't feel long. It didn't give you a Transformers 2 or Pirates of the Caribbean 3 feeling, looking at your cell phone and checking the time --- wondering just how long the movie has been going.

The story felt complete. It was clear. There were some diversions, as there are with most 'journey' movies, but the writers did well at bringing any side storylines back to the central story of explaining who Aquaman is and what he's about.

Black Manta (Yahya Abdul-Mateen II), for example, has a large role in this movie. Still, he's not the main focus. He's plot B instead of plot A. It's all connected though.

I wasn't familiar with Manta from the comics (Aquaman was never one that I rushed out to grab), so I can't say how he compares to the comics. I thought he made for a great movie villain though.

The writers did a great job at introducing us to Manta, giving us some inkling of what he can do and also leaving plenty of room for further development in any possible sequels.

Overall, the storytelling was impressive.

There were a couple of minor plot points that were left unexplained, but they were fairly minor.

Just how did Aquaman travel from the Sahara to Italy so quickly?

And when did the young Aquaman meet Nuidis Vulko (Willem Dafoe)?

Both of those could've used about a minute more of explanation --- even if it was just visually.

When I saw Dafoe, I immediately saw him as the Green Goblin from the original Spider-Man trilogy.

After a few scenes, I got accustomed to the fact that he wasn't a villainous character (something he's so good at!) this time around.

Dafoe did a good job in his role of sensei in this story. 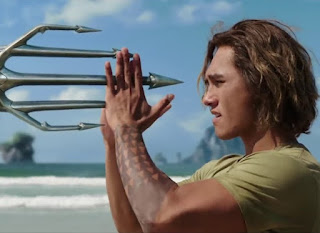 By the middle part of the movie, I wasn't seeing him as the Green Goblin in a wetsuit.  I was rooting for him to survive any battles and make it through to the end of the movie.

Going back to another example of the impressive producing and writing, there were several flashbacks in the movie, but they were done so nicely that it didn't distract you from the present day storyline.

The flashbacks were a welcome glimpse at how Arthur Curry grew up.  There were probably 4 different Arthur Curry actors, including Momoa.  The casting directors did a very good job at making sure they looked like Momoa.

The teenage actor looked the most like him.  While I wasn't blown away by the child actors (and one teenage actor), they accomplished their task of quick flashbacks.

Atlanna was a big part of the story, naturally.

As his mother, she's Curry's link to the world of Atlantis.

It wasn't Nicole Kidman's most memorable role, but she did well with it.  She made you feel the appropriate emotions at the times you were supposed to feel them.

The first action scene featuring Atlanna was a shot well with great camera movement, but it was almost a little too CGI-heavy.

I don't know if that's because Kidman wasn't doing most of her own stunts or if it was just a result of the unique cinematography.

The somewhat distracting CGI is quickly forgivable because it's the first scene of the movie and you're anxious to see where the rest of it goes.  There was good chemistry between Kidman and Curry's father (Temuera Morrison).

King Orm (Patrick Wilson) is Curry's brother.  He's a true Atlantian, unlike Curry.  That leads to some tension.  Orm has all kinds of motivations and Aquaman has various struggles but the two have a natural tendency to cross paths.

They cross paths much sooner than I would've expected.  That doesn't leave you disappointed at the end of the movie, though.

I was a little surprised when I saw that Wilson was going to be in the movie.

I didn't know what role he had, but he didn't really seem like someone I automatically wanted to see in a superhero movie.

That being said, he did a great job.  He was a good choice.

Someone sitting next to me had one question when she saw Mera (Amber Heard) appear on-screen: "Does she think she's Ariel from The Little Mermaid?"

I guess she does kind of resemble her with the green bodysuit and the red hair.  I looked at the comic book depictions and I guess Mera's hair was maybe a little too red at times.

Maybe it could've been more orange than red?  She looked good regardless.

Heard won't win any awards for this performance.  At times I thought she was pretty stiff.  At others she and Momoa seemed to have a nice chemistry.  It wasn't too over-the-top.  It was somewhat understated and it worked well.

I assume that Heard would grow into the role of Mera in any future movies.  You could tell this was her first outing with the character.  The fight scene in Italy was a great moment for that character --- probably the standout for her in the movie.

There were several other characters in the movie, including Dolph Lundgren (the awful Masters of the Universe star), who played a King (and Mera's father).  He did well in his role to my surprise.

If I were a more avid Aquaman fan, I'd be upset that they changed King Nereus (Lundgren) from Mera's betrothed to her father.  Marvel has done this a few times as well -- most recently changing Hela in Thor: Ragnarok from Loki's daughter to Loki's sister / Odin's daughter.

I'm not a fan of those changes.  Rather than change King Nereus entirely, why not just introduce a new character as Mera's father and leave King Nereus out of the movie altogether.

He could potentially show up in a future movie.

Things like that do irritate me, but I'm not that avid of a fan so it didn't bother me. 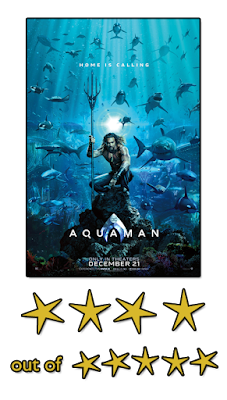 I won't ruin anything but even Julie Andrews stars in the movie!  That's right, no cameo in Mary Poppins Returns but she is in Aquaman.  Go figure.

All in all, Aquaman was a really good movie and I'm hoping that gives DC another incentive to go forward with their DCEU.

They can compete with Marvel if they do it the right way.  Jumping into mash-up and team-up movies probably wasn't the way to go.

Marvel started slow and built to The Avengers and Thanos and look at how well that did for them.

Those introductory movies aren't as much fun as the team-up movies, but they are required to get the audience familiar with the characters in your story and to get them excited for more.  Aquaman definitely accomplished that goal.

Posted by Batson at 4:37 PM No comments: