Lost lessons in the Trayvon Martin and George Zimmerman incident

Wow, has this Trayvon Martin-George Zimmerman story ever hit the airwaves? The beginning of last week, I didn’t know who either of them was. Now, when I type “George” into Google, the first result is “George Zimmerman.” The second is “George Clooney.” 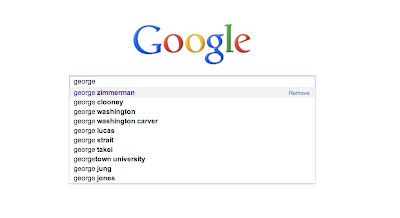 As for Trayvon? Hoodie protests are happening all over the place.

It’s a sad situation all around. One person is dead. The other had to go in hiding, for fear of his life. Trayvon Martin’s family is dealing with their loss. George Zimmerman’s family has been receiving death threats. That’s a sad state of affairs.

Perhaps the most disappointing thing to me is the extreme reaction people are having.

On one hand it’s nice to see that people can get so passionate about something. It’s a nice reminder to politicians and government officials that the people do have power. The media does have power. They can’t get away with whatever they want.

On the other hand, there are death threats and bounties being talked about. Am I really living in a western movie? Is it Alabama in the 1960s? A bounty? Really?

Since when is it okay to simply take the law into your own hands?

Spike Lee and Roseanne Barr tweeted addresses of Zimmerman. While Lee posted the wrong address, Barr posted the right one. I'm sure they just want people to send baked goods to help the Zimmerman's cope with this situation.

Instead of gathering the facts and waiting for the facts to come out, people seemed to have immediately gone to the extremes.

Sunday night a viewer called into the news station I work for. He was irate that we were only airing half the story. “Take a look at his Facebook page,” this guy told me. I pulled up what I found to be Trayvon Martin’s Facebook. “Does that cocksucker look like a good guy to you?” the viewer asked me.

Trayvon’s profile picture was in front of my face. He looked like many of the teenagers I’ve seen on Facebook and Twitter. If I were stereotyping, sure, I’d agree that he looked thuggish. In one of the pics he's flipping the camera off and he's added the 'N' word to the photo. Regardless of the photos, I know better than to make assumptions based on Facebook photos.

When someone is arrested, one of the first things I do at the station is check social media websites. There was one man charged in Charlotte with murder recently. His Facebook photos consisted of photos with his kids and a photo of the Christmas cookies he baked in the oven. Yet, he is accused of murdering a woman in an armed robbery.

I’m not about to judge a book by the cover. 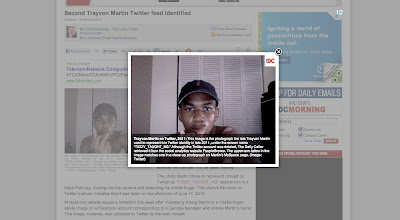 While some are taking Zimmerman's side, others are taking Martin's side.

Just the other day, I read that Chaka Kahn has made a song for Martin. Al Sharpton and Rev. Jesse Jackson are supporting the “Justice for Trayvon” movement. Many other prominent members of the African-American community are doing the same.

How about we wait for the facts before riling people up and organizing marches?

It appears that both Trayvon Martin and George Zimmerman have records. Martin was suspended from school, having several issues there over the past few years. Zimmerman has a past that includes resisting arrest and aggravated assault. If we’re jumping into assumptions, then it appears Martin was a thug (or at least a troubled teen) and Zimmerman has some anger-management issues.

Did any of that play a part in Martin’s death? Who knows?

Was it racial profiling? That’s an answer we’ll probably never have. One side of the story is dead. The other probably won't be believed by many people.

I’d be a liar if I’d said I hadn’t paid extra attention to someone I’d never seen in my neighborhood before. Regardless of skin color, I pay attention. I’m cautious, especially when I’m out at night.

I don’t want to get jumped by a thug, a redneck, a vigilante, a paranoid woman with a can of mace, or any other number of people. Hell, it’s not just people you have to worry about. If I’m walking late at night, I’m making sure I don’t get hit by cars and I’m ready to run if an unleashed dog comes barreling out of nowhere.

I can see why Martin would be angry, being confronted by a watch leader when I was just walking home after buying some Skittles and Arizona Iced Tea.

I can see why Zimmerman would pay extra attention to a young person in the neighborhood given the string of recent robberies that area had.

Martin had a hoodie on and his hoodie up. Does that mean he looked suspicious? Not necessarily, but covering the face (with a ski mask, bandanna, or hoodie) is something robbers do. Then again, people also wear ski masks when they’re shoveling snow in below-zero weather too. People wear hoodies when they’re out jogging or when they’re sitting in the stands of a football game.

The thing is: none of those actions are suspicious.

What if Martin seemed suspicious, not because of his skin color or clothes, but because of his actions? Was he walking a little too quickly? Was he looking all over the place, acting paranoid? Was he avoiding walking into the streetlights?

Was Martin holding the Skittles and Iced Tea causally or were they in the pocket of his hoodie? Did it look like he had a weapon or was it clear he wasn’t armed?

You can take these questions and scenarios all over the place.

It all boils down to this: we don’t know. 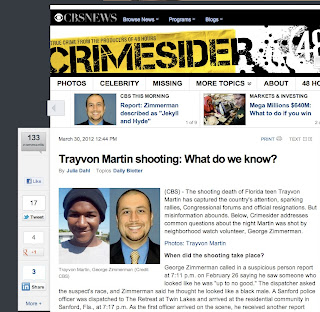 That huge fact doesn’t seem to matter though, as many people have already sided with Zimmerman or Martin.

Now, I haven’t ready every article or seen every interview that’s available. Therefore it is possible that I’m missing a major detail here. I’m willing to bet, though, that the majority of people who have already formed their hardcore opinions on this situation have the same information I do.

That’s what really baffles and scares me.

People are so quick to judge Zimmerman, calling for an arrest and, in some cases, an execution. There’s no need for a jury. The verdict is in. “It’s racism!” “He was acting as a vigilante!”

There’s this lynch mob mentality floating around out there, similar to that of a witch-hunt.

It’s certainly possible that Zimmerman-Martin is a case of racial profiling. Let’s not kid ourselves. Racism does still exist. It probably always will. Why do we have to go there right away though, especially with no facts to back that up? A Hispanic man kills a black man and it’s got to be racism?

Let the CSI folks do their job, checking to see if Zimmerman’s claims of self-defense are backed up. Did Zimmerman provoke the situation? Let the police do their investigation.

Why wasn’t Zimmerman arrested? That seems pretty clear to me. He said he acted in self-defense and, under Florida law, that’s allowed. It certainly seems that law needs to be looked into.

If evidence comes out that Zimmerman killed this kid out of hate or without need, then he should absolutely be punished to the fullest extent he can be. If Florida has the death penalty, aim for it. A life-long sentence works too – whatever the jury deems appropriate.

I’d suggest we wait, though, before calling people to arms and demanding immediate action. Give the officials a chance to do their investigation and, if it comes to it, the jury a chance to hand out the verdict.

I was happy to see that the protests executed this week and last were done so in a peaceful way. Instead of storming the Sanford Police Department with pitchforks and torches, they bought bags of Skittles and Iced Tea. That’s the only positive I’ve seen stem from the entire situation.

Jumping to conclusions and forming judgments out of anger is an easy thing to do, but it can also be very dangerous.
Posted by Batson at 4:36 PM No comments: