Last night the Charlotte Bobcats lost in a pre-season game against the Miami Heat. The game was held at the PNC Arena in Raleigh.

Thanks to a drawing at work, I won a ticket to the game. Since it wasn’t held in Charlotte, the Bobcats were taking a a group of season ticket holders to Raleigh by bus so they could see the game.

The entire experience was a lot of fun. We left Charlotte in the afternoon on two large buses. It was kind of like a field trip from grade school days, except this time we got to eat on the bus! Snacks, soda and a showing of The Hunger Games. Not a bad bus ride at all.

Shortly before 5 pm, we arrived at the arena. 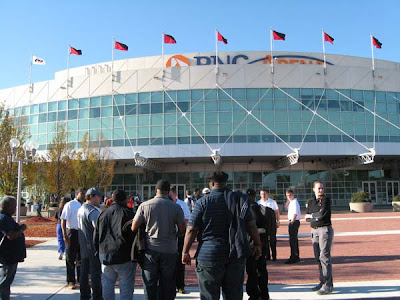 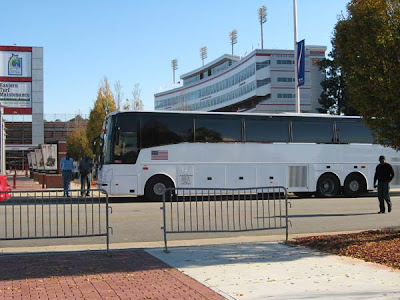 We were taken through security and then to a private banquet room with a catered buffet. 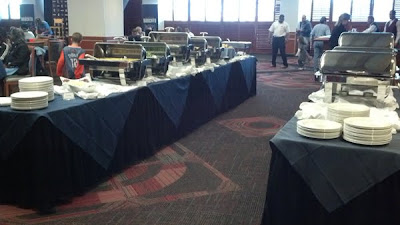 During dinner, Fred Whitfield (President, Chief Operating Officer, and Alternate Governor) and Rod Higgins (President of Basketball Operations) did a Q&A. Some of the fans hammered them pretty good, asking about last year’s season. 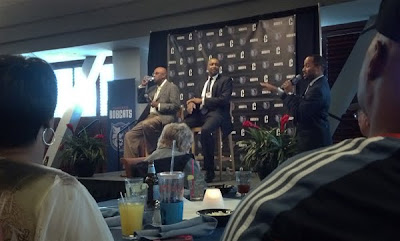 I don’t follow the Bobcats, or basketball, that closely, but it was pretty well known amongst everyone in Charlotte (and every NBA fan), that the team had some issues last season.

Fred and Rod pretty much said that they are in the process of rebuilding the team and that they think there’s potential to develop a couple of real power players in the next few years. They said they are trying to build the Bobcats into a noteworthy team, but there's a few challenges since they are located in a medium-sized market.

I’m not sure those answers extinguished the fans’ concerns, but I think they liked the opportunity to ask their questions.

At that point the group found our seats in the arena.

I took my baby Digi on this trip (left the big one at home), so no pro pics from me – just some snapshots. Although my seats were good enough to get some good shots, so maybe I should have brought it with. 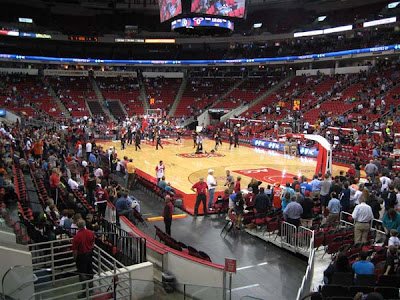 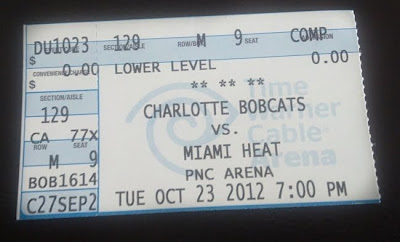 They billed the Bobcats as the home team, but there were a lot of Heat fans in attendance too. 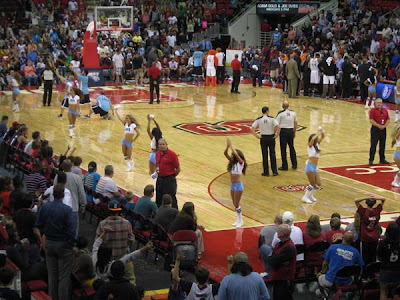 LeBron James got a mixed reaction throughout the night. 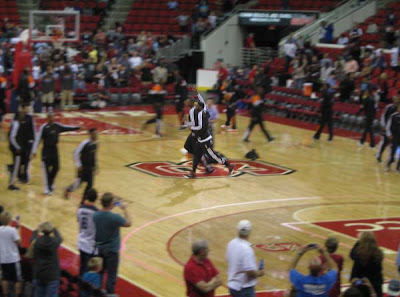 Some fans booed him and others cheered him along. It reminded me of the kind of reaction John Cena frequently generates on Monday Night Raw.

A lot of the Cats fans figured they wouldn’t win against the Heat – and they didn’t – but I thought it was a pretty decent game.

The Cats scored the first few points. Then the Heat took the lead, but the Bobcats were within a 10 point distance throughout most of the game. Halfway through the 3rd quarter, the Heat was close to 20 points ahead. The Bobcats closed that gap, but never managed to outdo Miami, eventually losing 92-98.

KEMBAAAAAA Walker (that’s how the announcer said his name each time)was the point leader for the Bobcats. That was evident without even looking at the stats. Kemba, who is 6’1” and 184 lbs., was playing against the bigger guys from the Heat, but Walker did his best to make up for that.

He and Ramon Sessions were the leaders on the team (although newcomer Bismarck Biyombo wins the award for coolest name this season).

They were up against the Miami Heat though – not an easy task. This was my first opportunity to see the Heat live and I was impressed. I see why LeBron James is “King James.” He made it all look so effortless. Whether passing or shooting, he did it with ease. The Heat worked like a well-oiled machine, making passes without hardly looking at each other. LeBron tossed the ball over his shoulder and another member of the team was right there to pick it up.

That’s something Fred and Rod said new coach Mike Dunlap was working on with the Cats – playing an uptempo, faster-paced game.

I saw the effort on their part, but the team just couldn’t stack up last night. I’m anxious to see how the Cats do against the Pacers in their season-opening home game November 2.


Some other fun moments of the night:
-Jingle Bells – there was a woman in attendance who was wearing shiny, skin-tight, mint-green hot pants. She was impossible to miss, even from several sections away. A couple people from our section commenced to singing Jingle Bells when she went to get popcorn.

-The Kiss Cam – some dude and his woman were shown on-screen. She was busy texting. He was looking at the screen. He nudged her to let her know that they were up, but she pushed him away with one hand, continuing her text with the other. A few other couples were shown on screen. Some of them kissed, while others just looked embarrassed. Then the director cut back to the original couple. The guy told her they were up again and pointed at the screen. She looked at the screen and at her beau and said, “So?” with a shrug. Back to texting. They ended the Kiss Cam segment by going back to this couple. The guy shrugged and then pointed to his cheek, indicating he’d settle for that. His girl gave in and kissed him. It got a large round of applause from the audience.

-Perhaps the funniest moment of the night was when they called a the first of two fouls on LeBron James. The little old lady in front of me let out her arms in excitement, like she was praising God. She was a happy little lady when that call was made.

After the game LeBron signed a few autographs. He went onto the court and signed for a few kids. Of course, a mob of people rushed the floor, so he and security headed towards the back, but James stopped near the entrance/exit and signed several more items for fans. Very cool of him to do.

The bus ride back home went by quick. This time we watched Battleship.

I enjoyed the entire trip, having never been to a NBA game before, much less being treated to the VIP experience.

I think I could definitely get into it.