Pink revealed on Ellen last week that she’s coming out with a new album in April.

Well, damn!  The Truth About Love came out in 2012 and Beautiful Trauma was just released in 2016.  Usually there’s a space of a few years between her albums.

Since I realized I purchased but never actually listened to all of the songs on Beautiful Trauma, I figured I’d better take a listen before her new material is out.

The post-motherhood Pink has been kind of hit-or-miss.  She turned a direction with her Greatest Hits …. So Far! album.  The new tracks on that release ('F**kin’ Perfect,' 'Raise Your Glass') had attitude but didn’t feature the rebellious nature that her previous work had.

They were rebellious, but in a more positive way.  Those songs lead into ‘Just Like Fire’ and ‘What About Us.’

Gone is the poetic angst that put her on the map.  It’s replaced by a fighter for equality and her perception of justice.

It’s great to see that Pink has grown as a person, but every now and then I want a funky “Bad Influence” or a poppy “Stupid Girls” or a rocking “Long Way to Happy.’

We’ll see what comes out of this album …

Beautiful Trauma
I think this should’ve been the lead single.  It’s a great song, but it didn’t really find it’s footing on the top 40 chart following ‘What About Us.’

There are a lot of different elements to it --- with the piano and orchestra and techno beats.  Somehow, this song manages to be both fun and emotional at the same time (with some great vocals as well).

I think this would’ve had better success as a lead single rather than a secondary single.

Revenge (featuring Eminem)
Pink and Eminem have worked on several songs together over the years yet none of them have gotten any radio play.  Maybe that’s because it’s not 2002 anymore.

This song stands out like a sore thumb compared to the rest of the album.  It’s fun.  It’s goofy. It reminds me of Pink’s work on The Truth About Love.

It really didn’t even need Eminem’s part.  It could’ve been a fine song without him.  He does fit right in on this song though.  He even sings more than he raps on this one.

The message of the song got lost on me by the end of the song, but I didn’t really care.

Whatever You Want
I remember hearing this on the radio a few times, but it’s somewhat forgettable.  It almost sounds like her work on 'Just Like Fire.'

I feel like it was too similar, which is maybe why it didn't succeed as a single the way one may expect it to.

The odd vocal emphasis on certain lyrics is a little different than the rest of the album.  "You don't seem to give two shits / 'Cause you're just too cool, baby."

It's not as distinct after 'Just Like Fire' was all over  the radio not too long ago.

The theme of a troubled relationship that seems to hold strong through the storms is kind of tired after being used on the past several albums.

It's a common theme, obviously, in most songs, but Pink, in particular, has used it ad nauseam. 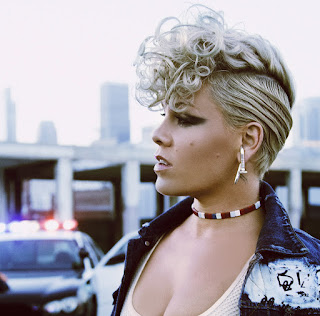 What About Us
It was an OK song.  It was actually amazing when it comes to Pink’s vocals, but I didn’t feel the authenticity here.  Her anti-Trump song had a couple of lyrical mistakes too.

"We were willin', we came when you called / But, man, you fooled us, enough is enough, oh."

Since when did people overwhelmingly go to Trump when he called to them?  Sure, he's got some supporters, but I don't think any of his supporters are the ones who are upset with him.

That part didn't really make sense to me.

Also, the song came off as stereotypically millennial (and I'm a millennial!).  It was a little bit whiny.

It reminded me of pro wrestler Raven from his WCW days.  "What about me?  What about Raven?!?" he'd ask the audience in an angsty tone.

Great vocals and some good music, but there was too much of a disconnect for me.  I couldn't figure out if it was a song about romantic love or a political statement against Trump.  The song was unclear to me.

I think a more focused anti-Trump song would've been the better route rather than a couple of small moments where she alludes to it.

For example, 'Dear Mr. President' was a great song.  It had a clear message that wasn't confusing at all.

But We Lost It
This starts off with some nice piano and a melancholy Pink singing "I wanna know where does love go to die / Is it some sad empty castle in the skies?"

I'm going to be repetitive by the end of this review, but Pink's talent is amazing.  Forget Vegas.  I feel like she should be on Broadway after hearing some of  these songs.

That being said, the song isn't a classic.  It's no 'Time After Time' or 'Nothing Compares 2 U.'

It's a nice song with some beautiful piano work and very nice vocals, but it's not as memorable as it should've been.

Who knows --- it may be a song that grows on you the more you listen to it.

Barbies
Maybe I’d relate to it a little more if I was a female, but it didn’t leave an impression on me.  It was an OK song with a few clever lines.

'Barbies' is about wanting to go back to being a child (in more simplistic times) and playing “barbies in my room.”

It missed the mark though.  It should've been a relatable song.  Most people have experienced a time where they want to go back to their childhood, even if it's just for a day.

The song felt cheesier more than anything else though.

Where We Go
This one isn't bad.  I'm not exactly sure what the message was after listening to it, but it's kind of uplifting.  I think it's a love song.

It's a toe-tapper (one of the only ones on the album so far).

The use of guitar here reminds me of a Kesha-esque country song.  It's kind of a genre-sharing song.  Not the absolute best song on the album, but it's probably up there.

For Now
Piano and Pink is how this song starts.  Some guitar kicks in as well.  Pink is really looking to put her voice on display on this album.

It's a love song.  "Tonight can we just get it right / Somehow, for now / Freeze frame, pause, rewind, stop."

The lyrics could've been better, but the music makes up for that.

The guitar is definitely my favorite part.  It's simple and works well with Pink's voice.

The main chorus was a little bit overproduced.  Too much happening there between Pink singing, the instruments, Pink's backup vocals and the EDM beats. 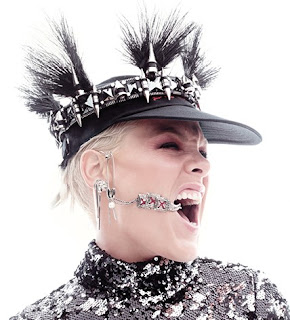 Secrets
There was a little Funhouse homage paid here with the ‘Da da da da do do do’ bit.
The rest of the song was somewhat lackluster.  It was like the forgettable track she recorded for Ellen ('Today’s the Day') with a little element of 'Funhouse.'  That 'Funhouse' element was probably the best part of the song.

There’s not a lot of depth to the lyrics either.  It’s pretty much ‘Everybody’s got a secret / I got some things to say.’

Better Life
This song reminded me of something that may have appeared on Can’t Take Me Home, but with a more mature sound.  It’s got a nice sound.  The lyrics aren’t that impressive, but the rhymes and emphasis on them (along with the fun piano work) makes it a fun song.

I think it should’ve been a single.  It would’ve been a better choice than Whatever You Want.  It demonstrates some much-needed variety on this effort.

I Am Here
This one had a nice beginning at least.  It stood out from the rest of the songs on the album.  Then Pink goes into the role she carved out for herself on the rest of the album: comfortable and soulful.  She’s got great vocals, but 13 songs of great vocals that sound the same (without actually saying much) doesn’t make the best album.

Finally, the main chorus kicks in with some powerful backup choir singers.

If it weren’t for that church choir and the up-tempo ‘Where’s everybody go when they go’ lines, this song would blend into the rest of them on Beautiful Trauma.

Wild Hearts Can’t Be Broken
Pink’s voice is initially partnered with a piano but the lyrics sound like the rest of the album at this point, especially on track 12.  The song, on its own, is probably very impressive.  At this point in the album, however, it’s the same old thing / same old message.

At first, it lacks the oomph to be a really powerful song, but thankfully Pink builds up to some power before the 3:21 minute song ends.

It seems like a song that would maybe be on Broadway and it’s quite a nice song, really.  But there wasn’t enough of a payoff after the slow build.

You Get My Love
Pink is a Bette Middler fan and that’s what this song kind of reminded me of.  It starts with Pink and a piano (again …) rather slow.  Then, about halfway through, Pink belts out a few of the lines.  And that's pretty much a wrap on this song. 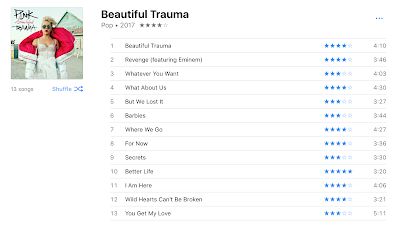 Overall, Beautiful Trauma a familiar Pink album with a few new elements, but not enough to feel fresh.

Most of the songs are either light and airy or slow and melodic with a lot of the powerful vocals. This was definitely a great showcase for Pink’s voice.

This wasn’t an album full of impactful and memorable songs that you can sing along to.  It’s an album filled with songs that make you appreciate Pink’s voice.  I miss the rocker Pink though.

There was no song that was as emotional as 'Who Knew' or as vulnerable as 'I Don’t Believe You' or as fun as 'So What' or as in-your-face as 'U + Ur Hand' or as energetic as 'Blow Me (One Last Kiss).'

It’s ironic because this is probably some of Pink’s best vocal work (intricate techniques can be heard in almost every song).  Due to that fact, it’s hard to give any of the songs a bad rating, but Pink seems a little lost with this album.

She didn’t seem to have that much to actually say.

I think the lesson here is that too many inspirational songs without actual inspiration leads to a somewhat forgettable album.

Hopefully this is more of a transitional album than an indication as to her musical direction on Hurts 2B Human.

Posted by Batson at 9:34 PM No comments: