What an action-packed movie this was, huh?!

Marvel and Disney have been working toward this for years and it really did come of as massive team-up movie.

I really liked how they kept the feel of the individual characters while telling the overall story of Thanos and his quest for the Infinity Gauntlet.

The story was pretty straightforward though they really made Thanos out to be a more dynamic character than just a power-hungry villain. 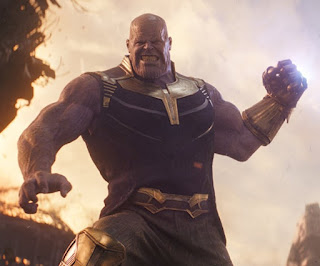 The backstory of Titan made him almost human — just misunderstood. Still a bad dude but you could see where he was coming from and where he went wrong.

Oh, and let's talk about his costuming.  I was very skeptical when I saw the trailer and he didn't have his battle gear on or his helmet.  He does adorn that at certain parts of the movie and I got used to seeing the movie version very quickly.

It was a quick adjustment if you're used to the traditional comic book version, so good on Marvel for making that decision on the costuming and doing it successfully.

The best thing about this entire movie was absolutely the various interactions between characters that don’t normally interact.


Here are some of my favorites: 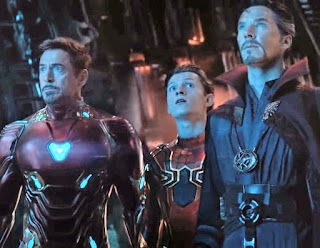 The snarky comments and pop culture references between these three characters was amazing. Despite not being a well-oiled machine at all, they had camaraderie by the end of the movie.

They were a great pairing to forward a major -- almost subplot -- of this movie.

This movie reminded me of some of the Star Wars movies, the way they had multiple situations going on at the same time, while still maintaining focus on the end goal.

These three actors portray their characters so well and made for some memorable moments.  Hopefully there’s more of this trio in Marvel’s future.

Even if it's just in Avengers 4, I want more of this trio. Or cameos in upcoming movies? I'm not picky.  I'll take what I can. 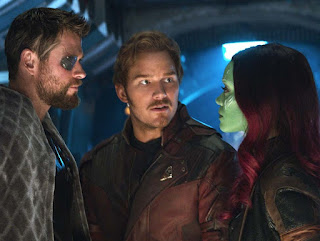 Oh my God!  Where do I even start with these interactions?

The ... let’s call it ‘muscle measuring contest’ ... was hilarious!

The Guardians calling Quill out on his obvious shortcomings against Thor was even more hilarious!  This 5 minuets (or however long it was) of interaction was great

It was so well written but the acting was awesome.  Chris Hemsworth has some great comedic abilities.  We all know that Chris Pratt excels in that area, too.  The two Chris' were awesome together.

I don't know that we'll see any future interactions between them, but what a treat for fans to get the bit we got in Infinity War. Teenage Groot and the rest of the Guardians

Groot, no longer a baby, was hilarious in this movie! His angsty, troublesome teen years were on full display here.

In a movie where deaths do occur, you need some fun moments to lighten the mood. Groot did that on almost all of his scenes.

I like how that character -- as minor as it is -- progresses throughout the movies.

In Guardians of the Galaxy you see a underestimated fighter who maintains his demeanor in tough spots.

He was selfless enough to sacrifice himself for his team.

Guardians of the Galaxy 2 shows a baby Groot -- innocent and oblivious to his surroundings more often than not.

Infinity War has an entirely different side of Groot.  Just as parents go through different stages with their kids, the Guardians team is going through the same growing pains with teenage Groot.

What makes Marvel movies so good is the creative character development.  They don't rinse, wash, repeat.

That's very much appreciated as a fan and moviegoer. 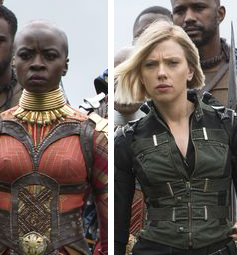 The Black Widow and Okoye

If you want to see two tough chicks fighting a tough alien chick, then Infinity War is the movie for you. Their interactions weren’t too long-lasting but the Widow and Okoye fighting alongside each other was pretty cool.

We saw a small glimpse of them interacting -- in the form a staredown --- in Civil War.  This time around they were doing battle alongside each other.  Unfortunately the Widow's impact in this movie was probably the least impressive of all.  I didn't walk away remembering any particular scene where she was really impressive or had a good one-liner.

The single one-liner that she did have wasn't that well written so nobody around me during the 3 times I saw this movie didn't laugh out loud, even though the producers left some pacing after the one-liner for audiences to react to it.

It's high time that Black Widow got her own movie.  She could excel properly in a full-on feature film. 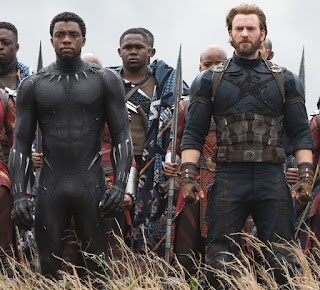 Captain America and The Black Panther

Just as their female counterparts teamed up, Cap and Black Panther did, too.

At one point, as they were running into battle it seemed as though they were almost racing. Nothing like a friendly 'anything you can do I can do better' rivalry in the midst of battle.

Everything involving Black Panther and Captain America was kept mostly serious in this movie.

There were a few lighter moments, but it was pretty serious with them overall.

Neither one of them really stole any scenes.  They were almost filler in this story, but I'm sure they'll have bigger roles in the future.

Plus, both of them have already had entire movies based around their characters, so it's nice to see some of the other characters get some shine in these big ensemble movies.

It was fun to see these two major characters briefly do battle in Civil War and even more fun to see them battle together in Infinity War. 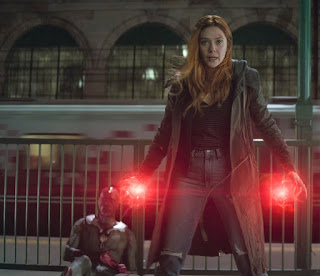 The Scarlet Witch and Vision (and their romance)

Who says you can’t take your girlfriend to a Marvel movie and get her feeling romantic after?
Okay, so it’s no Notebook romance but their relationship actually plays a pivotal part in the story.

Not sure where everything will go from here but the romance that was hinted at in Civil War went full force in Avengers, part 3.

I wasn't necessarily feeling a lot of chemistry in Civil War.  The romance felt a little contrived, but the writers did well with making it more important and Elizabeth Olsen and Paul Bettany actually do have some good chemistry together.

It felt real in this movie and that's important, especially considering the important role they had in the movie.

There's one scene -- and you'll know which one I'm talking about -- where Olsen's emotions carry the scene.  She may be a Marvel movie star, but this young Olsen sibling has some impressive acting chops! 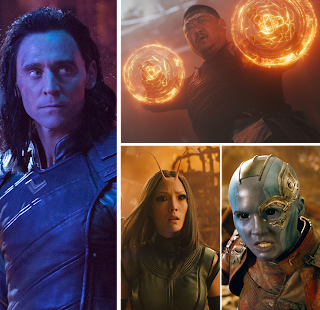 There were several other characters who showed up in this movie, of course.

Hulk and Bruce Banner are both involved in this story.

The Falcon and War Machine had a couple of nice team-up moments.

Dr. Strange's buddy, Wong, has a nice bit of screen time.  Cap's buddy, The Winter Soldier, gets in on the action, too (as was foreshadowed at the end of The Black Panther).

Pepper Potts made her return!  Gwyneth Paltrow didn't add that much to this movie, but she's a big part of Iron Man's life and it felt strange when she didn't even have bit parts in some previous movies.

Mantis continues being laugh-out-loud funny.  Rocket and Drax had some great moments as well.

Nebula has a large role in the movie.  Considering I thought she may have been written off after Guardians of the Galaxy, this character has staying power.  I think there's still a lot of character development that could be done with that character.

There were even a couple of other characters: one new one and one surprise return.

I'm amazed that the writers were able to make this story work without making any character feel completely unimportant.  I'm sure it's extremely difficult to divide up screen time in situations like this.

Stan Lee, of course, has a cameo.

Noticeably missing from this chapter in the MCU: Hawkeye, Ant-Man, The Wasp, Baron Mordo, and The Valkyrie.  I'm kind of OK with that because I'm hoping they show up in Avengers 4 (or future movies).

Those characters are too good to not get involved in these crossover, team-up movies!

If you're wondering where Nick Fury was, here's a hint: let the credits roll. :) 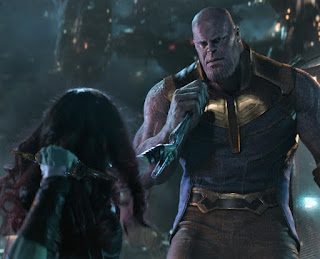 Lastly, Thanos’ interaction with just about everyone

From Gamora to all of the Guardians to Loki and another well-known villain (don’t want to spoil that part for the handful of people who may read this and haven’t seen it yet).

Thanos was the character Marvel has been building to for 10 or more movies. It makes sense that they’d focus on him in this movie.

This was pretty much 'the Thanos movie,' but it didn't feel like it.  Just as certain Star Wars movies focused on Darth Vader, but still told an overall story, Infinity War progressed the Marvel Cinematic Universe plan.  It properly fully introduced Thanos for the first time and made everyone realize (very quickly) that he's a big deal.

One of my favorite aspects about this movie is that it truly did feel like a gigantic team-up movie.  At certain parts you felt like you were watching a Guardians movie.  Then you transitioned into The Black Panther.  No, wait.  It's an Iron Man movie.  Nevermind, it's a Dr. Strange movie!

The scenes that involved the individual characters and team-ups felt like you were seeing universes collide and mash-up. 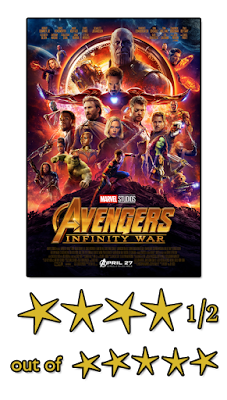 Marvel did an exceptional job keeping the characters in line how we're used to seeing them, even if they were out of their element and in a totally different environment than they are typically in.

And, finally, how about that ending?!?

I have a hunch how it’ll all end up but I bet Marvel throws some surprises into the next movie.

With the snap of the fingers, it was over.

Posted by Batson at 1:50 PM No comments: