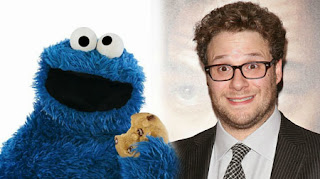 It's been about a year since I posted part one. I figured it was about time for a follow up.

Okay, so technically Cookie Monster isn’t a cartoon character. He’s a puppet – or is it mupppet?

Either way, if Sesame Street was to be brought to life on a Broadway stage with the assitance of blue makeup and fake blue fur, Seth Rogen would get the part. I don’t even know if Seth Rogen can sing, but he’d still get the part.

There really should be some kind of commercial that pairs the two of them together. 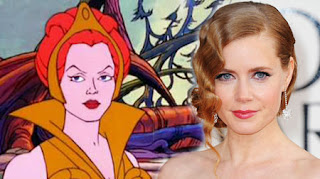 If there’s ever a He-Man and the Masters of the Universe (I swear I will write a screenplay if somebody doesn’t finish it soon) Amy Adams would be the perfect candidate to play Teela. Take a look at the cartoon version of Teela and the real life photo of Amy Adams.

For those of you who aren’t familiar with He-Man (and why not?), Teela is a red-haired, strong-willed, combat-trained young woman. She doesn’t have any special powers or super strength, but she can hold her own against most men in a sword fight.

Amy has already been in a super hero movie as Lois Lane in Man of Steel. This time around she’d likely have a more physical role, but I think she could handle it. 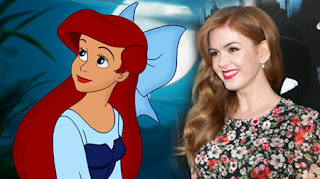 Amy Adams was in Disney’s Enchanted a few years back, but her celebrity doppelganger – Isla Fisher – could star as another Disney character: Ariel from The Little Mermaid.

Disney is going the live action route with Maleficent, which comes out in May. If they wanted to do a live action movie of The Little Mermaid, then they have their lead actress with Fisher.

She has brown eyes instead of blue eyes and somewhat of a chipmunk smile, but give her a dark red dye job and she’d get the job done. She could easily pull off the wide-eyed look of wonderment that Ariel had in the original movie. 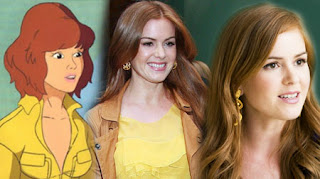 Speaking of Fisher, there’s another role I think she could pull off. I know Megan Fox is going to be April O'Neil in the new Michael Bay-directed TMNT movie, but, for some reason, I think Isla Fisher would make a great April Neil.

It's too bad the role has already been cast. Fisher could've done well with that character. 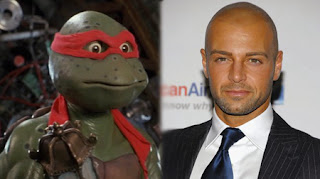 I’m not surprised Joey Lawrence wasn’t cast in the new TMNT movie, but when I was watching some old Teenage Mutant Ninja Turtle cartoons and movies, I realized that Joey Lawrence wouldn’t make a bad turtle.

He could pull off a Michelangelo or a Raphael with his natural ‘What’s up dude?’ attitude.

I don't know that he'd be a good fit for a more serious, action-packed TMNT movie, but if you're looking for comedic (more along the lines of the original Turtles movies and TV series), then Joey Lawrence wouldn't be a bad choice at all. 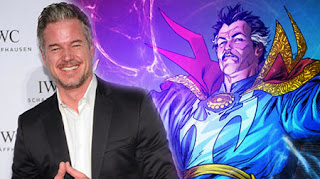 One character I hope isn't overlooked with the new Marvel movies is Dr. Strange. He's always been a fun character, but is often overlooked. Get the right leading man and I think Marvel could have another successful movie on their hands.

Eric Dane -- perhaps better known as "McSteamy" on Grey's Anatomy -- would be a good choice. He's old enough to have a distinguished look, but not too old to not be a threat. He's a big guy (gotta' be over 6 feet), so he comes off as though he could be an imposing force while fighting villains and saving the galaxy from doom.

Dane is a decent enough actor, from what I've seen, so that always helps too. 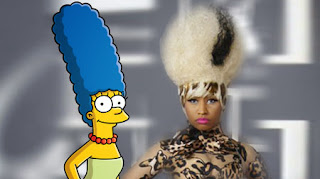 Last time I said that Nicki Minaj could play Prince Adam from He-Man. This time, it’s Marge Simpson. Given Nicki Minaj’s ever-changing hair and clothing styles, she could likely play a variety of cartoon characters.

She’s had this poofed up hair style before in pink and in blonde/black, but she’s never worn it in blue. That’s probably because Marge Simpson memes would be all over the Internet.

I don't know about Minaj's acting ability, but she sure does have the look down. 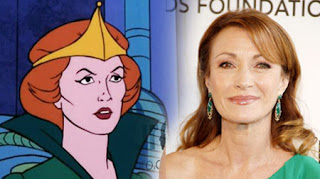 There are probably a few middle-aged actresses who could play the Queen of Eternia and He-Man’s mother, but Jane Seymour would be a great choice in my opinion. She’s got a certain aura of sophistication about her -- kind of a maternal thing.

Yep -- she could definitely play a regal, level-headed queen. 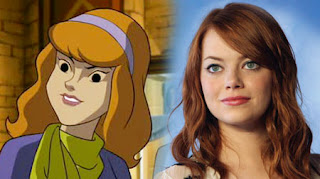 This last one is my favorite. Emma Stone is always fun. If she went back to her red locks, she could easily get the role of "Daphne" in a Scooby Doo remake.

Speaking of the live action Scooby Doo movies, there's a double feature pack on sale for $3.99 at Best Buy right now. I've never seen the live action movies because they looked too ridiculous to be good. I figured I wouldn't enjoy them. Plus I'm not the biggest fan of Sarah Michelle Gellar.

I, truthfully, haven't watched enough material of hers to form an opinion on her acting ability, but I always got a bad vibe from her -- grouchy or snobby or something.

Back to Emma Stone though. She has the perfect attitude to make a Scooby Doo movie work.