Red Lobster biscuits -- in a box! 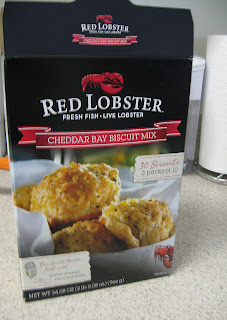 During a trip to Sam’s Club I saw the most amazing thing: Red Lobster biscuits in a box!

They were only about $5 too. It was amaaaazing!

I didn't know if the product was available for a temporary amount of time, so I took full advantage.

I mean, really, it doesn't get much better than Red Lobster biscuits!

I only bought one box, but it makes about 30 biscuits. That's about 4 or 5 small dinner parties.

There are three pouches of biscuit mix inside, making it easy to get the same flavoring they have at the restaurant. Thankfully, the directions are easy too.

You put the mix in a bowl, add 3/4 of a cup of water, throw in a handful of cheddar cheese, and then roll the dough into little biscuit balls on a cookie sheet.

I only got 9 out of that batch, but some were a little larger than others. 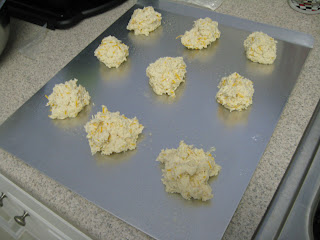 Once I made the first couple of biscuit balls they were hard to roll together. A large portion of the mix stuck to my hands.

While the biscuits were in the oven baking for 14-16 minutes, I put some butter into a bowl, microwaved it, and then added some of the garlic herb blend pouch (also in the box).

The end result was a batch of 9 golden-brown biscuits.

I put the spices on and it ended up tasting just like the biscuits you’d get from Red Lobster. 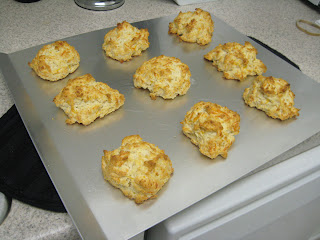 I probably should have had a little more melted butter in my bowl though. I was a little short on that.

Yes, these new biscuits in a box are pretty much heaven in a box – sold at Sam’s Club!