All the controversy about Captain Marvel. Who knew?

If you've been paying attention to Twitter and other forms of social media, you probably did know about it.

I heard bits and pieces a couple of weeks ago, but didn't bother to give it much research.

I did take a look at the reports. I guess actress Brie Larson said while she was on a press tour promoting the movie that she wanted more diversity (specifically women) in the reviewers who get to see movies early.

I can see why that may make some people upset. But then she clarified and said that she's not asking to take anyone's seat away from the table --- just asking for more to be added.

I don't see an issue with that. That's a good way to put it.

Then people tried to bomb the movie on Rotten Tomatoes, which caused the website to make some changes.

Let's get to the movie (no spoilers in this review). 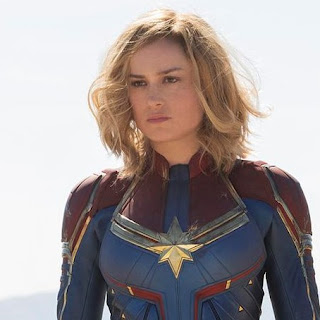 First, I really liked the way the movie handled the flashback scenes. Most of the movie took place in current time (well ... it was set in the 90s, but 'current time' for the movie).

The flashbacks were intertwined very nicely.

Eventually there was a twist when we finally saw the full flashback. It was almost like a thriller with a twist (but not as intense).

The flashbacks helped distinguish between Captain Marvel (Brie Larson) and her human identity of Carol Danvers. 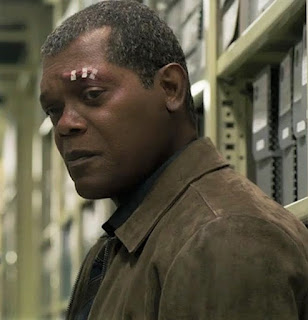 Captain Marvel is odd. She's not your typical hero (male or female). She's almost like Thor was in the first Thor --- new to Earth. She's advanced enough, in many ways, to figure out technology, but she walks around in her space suit like it's no big deal.

It's kind of a fish-out-of-water story with an almost robotic-like Captain Marvel wandering around Earth, looking for her shapeshifting foes.

It does provide for some humorous moments.

The cat -- Goose -- also added some levity to several scenes.


While there was humor in this movie, I don't think I laughed out loud once. I hadn't thought of that until just now. That's not to say that it's bad --- just not as funny as an Aquaman or Thor or Guardians of the Galaxy. 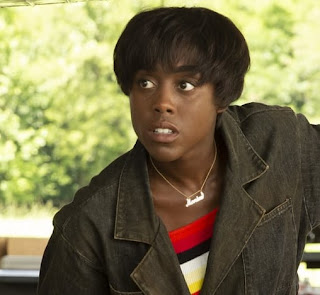 There was also drama in this movie. Carol's best friend Maria Rambeau (Lashana Lynch) brought out the emotions on a couple of scenes.

She seemed genuine in her tears and really made a regular moment in the movie stand out as being impactful.

On the opposite side of the coin, some of Marvel's interactions with Maria and her daughter Monica Rambeau (Akira Akbar) were cringeworthy to say the least.

Fury had a few cringeworthy moments as well.

The characters just didn't react the way a normal person would in a situation that involves aliens and space battles.

Maria correctly assesses that she should probably sit the space battle out so that she's there to take care of her young daughter.

Her daughter, Monica, says 'Mom, you're not being a very good role model for me' --- implying that she should go be brave and show her daughter that she can do anything.

I'm all for women's empowerment, but that's just stupid. Since when do you take your adulting cues from your 12-year-old?

You're the child's only parent. She has grandparents, so that's good. I'm not sure what the situation is with the father, but he's not part of her life.

So going into space to battle a group of aliens with possibly no way to return is good parenting? Inspiring, is it?

It wasn't inspiring. It was a little too cheesy.

There were Stargate SG-1 levels of hokey in some other scenes (like the dishwashing scene with Fury and Marvel).

I don't know that it was agenda-pushing, but it did feel a little 'try too hard' between the strong female hero, the release on International Women's Day and the attempted inspirational 'you can do anything' dialogue.

It felt a little forced, which is too bad because Captain Marvel is definitely an interesting character. 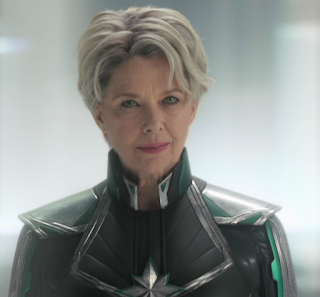 It's always interesting to see serious actors and actresses like Annette Bening in superhero movies.  Bening played Dr. Wendy Lawson.  She did a good job.

It still catches me off guard sometimes though.  I'm used to Masters of the Universe and Beast Master and Teenage Mutant Turtles: The Secret of the Ooze.  You didn't get a cast with big acting chops in those movies.

It shows how far we've come in the superhero genre when you can have Michael Douglas, Glenn Close, Annette Bening, Julie Andrews, Russell Crowe and other Oscar winners as regular parts of the cast. 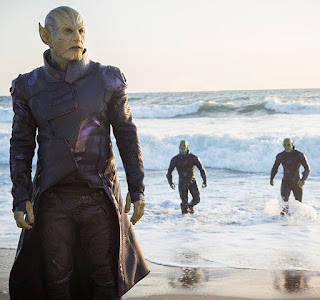 Visually, this movie was good. I accidentally purchased a 3D ticket, so it wasn't my usual viewing experience.

There weren't any moments where I thought 'that looks like too many computer graphics.'

The Skrull costuming could've been a little more realistic, I guess, but I can't complain about that too much.

I'm not sure that their characters will really stand out in the big picture, but they served their purpose for this particular movie.

I don't remember any of their names despite the fact that they were in the movie from almost the beginning all the way to the end, so the individual character development could've been a little bit better.

As a whole, the Skrulls were developed however.


Two fight scenes that stand out to me are when Marvel is captured on a Skrull ship near the beginning of the movie and a battle on Earth (on an above-ground train).

The final fight scene was a little bit anticlimactic for me.

Marvel utilizes her awesome powers, but I would've appreciated more struggle honestly. I don't think Thor or Thanos or Hulk have won battles with such ease.

And, I guess we may as well talk about one SPOILER from the mid-credit scene ... (scroll down for the spoiler)

Overall, it was kind of what I expected. It was a Marvel movie (meaning it looked good, the production was on point, the script was good, the acting wasn't bad and there was a mix of comedy, drama and action).

Will it do well at the box office? It already is. I'm sure it will continue to do well.

I don't know where it will finish at the box office, but I don't think it will have the natural momentum that Aquaman or Guardians of the Galaxy or Ant-Man or Wonder Woman had.

Those were hits because fans loved the movies. This is a movie that will do well because it has all of Disney and Marvel's marketing and money behind it. It's expected to do big numbers.

It'd be a disappointment if it didn't.  I'm not a hater either. 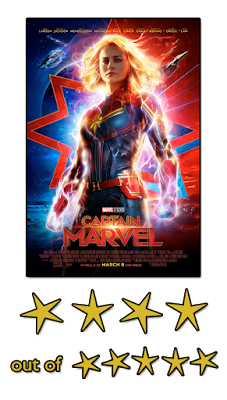 When I went to see Black Panther on the first Saturday it was out, I caught a 9:30 or 9:45 am showing.  The theater was completely full.

I saw Captain Marvel on the first Friday it was out at 4 pm and there were maybe 12 people in the theater.

While this isn't a bad movie, it's not groundbreaking.  The positive and negative media coverage of Captain Marvel before it was even released will probably make it hard to judge the movie's actual success and footprint on the movie landscape (and superhero genre) until the end of the year.


Like I said in my Most Anticipated Movies of 2019 blog, it's not the movie I'm most excited to see this year.

In a year with Spider-Man: Homecoming, Dark Phoenix, Shazam, Avengers Endgame and a Joaquin Phoenix-led Joker, I think this will be a movie that I watched and enjoyed, but wasn't a favorite in the somewhat crowded superhero movie field.