Sky Captain and the World of Tomorrow - reviewed.

I realized it’s been a few weeks since my last movie review. Before that, it was even longer, so I decided: it’s movie week.

All week, a new movie review each day.

It starts off with Sky Captain and The World of Tomorrow.

I remembered seeing a few previews years ago, but it never peaked my interest enough to see the actual movie.

It was on my Netflix list, however, so last week it ended up in my mailbox.

Turns out, it wasn’t a bad movie at all.

Sky Captain was a lot like Sin City in the sense that it consisted of a lot of very impressive artwork and graphics.

At first I didn't realize there was so much animation involved.

The movie starts off with a scientist getting killed. From there giant robots attack New York City. The Sky Captain, Harry "Joe" Sullivan (Jude Law) ends up swooping in (literally, with his Sky Captain plane) to save the day.  During the entire scene with the robots, it becomes clear that a good portion of the movie was filmed in front of the green screen.

After watching some of the extras, I realized that the entire movie was actually filmed in front of the green screen.  Of course, I didn't realize that while I was watching the movie.

The attack planes in the movie were actually something that would probably make George Lucas jealous.  The plane wings flapped like the wings of a bird.

They were definitely some awesome spaceship-like planes that the dark side could have used quite well against the Jedi.

Pesky news reporter, Polly Perkins (Gwyneth Paltrow) ends up discovering part of the mystery of these giant robots. Through happenstance, Polly and Joe end up partnering to solve the mystery.

The only problem is that Polly and Joe were once lovers. Awkward....

One of their mutual friends, Dex (Giovanni Ribisi), gets captured by the robots, which is too bad because he adds a little comedic element to the movie that is lacking when he's not in it.

It does further the plot, though, giving Joe and Polly an extra incentive to figure out what the deal was with the robots.

If not to figure out the mystery or to write an article on it (in Polly's case), to find their friend.

Although it was a shame to see Dex disappear from the movie, the relationship between Polly and Joe made for a few laughs.

Jude Law and Gwyneth Paltrow had a good chemistry between them.  Their characters were pretty complex.

Joe's unfaithful past and Polly's career-oriented focus on the future were obvious problems in their relationship, but they still had an obvious attraction to each other.

They end up traveling to a few different places and facing unforeseen odds in order to solve the mystery of the robots.

Usually I can predict the plot of a movie, but I didn't see the twists and turns the movie took.

During their travels, there's a nice little appearance by Franky -- probably recognizable to most as Angelina Jolie with a patch on her eye.

For a good portion of the movie I was convinced that Angelina Jolie played the part of the mysterious female commander of the giant robots.

Turns out that's not Angelina -- somebody else.

Like with most of the other characters, there was a nice surprising reveal with that character as well.

None of the characters were one-dimensional, which made the movie-watching very enjoyable.

At the end of the movie there's a twist that I doubt very many people will see coming. 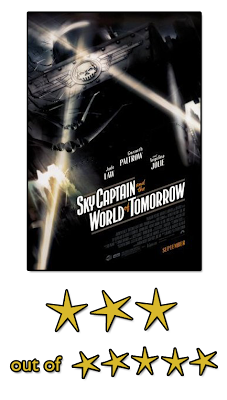 Overall I was very impressed with the movie.

It definitely exceeded the expectations set by those previews I saw several years back.

Posted by Batson at 5:23 PM No comments: