After a week off last week, I was back at it again -- this time testing out Jewell Treats, located in SouthPark Mall.

There's a small stand outside of Gymboree, near the Apple store.

The first thing I noticed about all three cupcakes that I bought was how small they were compared to some of the others I've bought recently. They weren't mini-cupcakes, but they were far from mammoth. 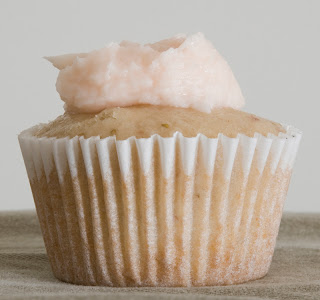 When I was trying to figure out which cupcakes to get, the sales clerk told me that strawberry is one of their best sellers. After eating it, I can understand why. It had a very real strawberry taste. It wasn't smothered in frosting, but there was enough to make the cupcake work.

There weren't any added extras on top of the cupcake, but, in this case, keeping it simple was just fine. 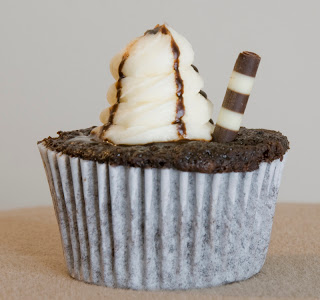 The Sundae cupcake was full of ooey, gooey chocolatey goodness. It was like a really good chocolate brownie in a moist cupcake form. With an edible candy straw on top for decoration, the cupcake was a nice snack.

It's also topped with vanilla buttercream and some Ghiradelli chocolate syrup. The straw was actually my favorite part of the cupcake though. It wasn't needed, but was very tasty. 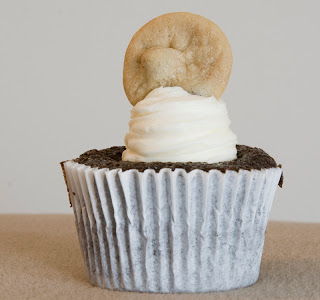 This cupcake was good. Cookie dough was baked inside of this one, but I'm not sure I got a very distinct cookie dough taste out of the cupcake.

It was topped with vanilla buttercream and a small chocolate chip cookie.

The combination of the frosting, the cookie and the cupcake worked to make a tasty cupcake, but it tasted more like the chocolate diamond sundae with a different topping than a cookie dough treat.