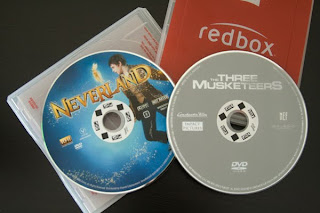 It was a Redbox double feature once again last night. I wasn’t going to rent anything, but Redbox e-mailed me a special weekend-only offer: get $.50 off your purchase of two or more movies. I took the bait.

This time I went with two remakes: Neverland and The Three Musketeers.

I’d never heard of Neverland, but the cover looked pretty cool on Redbox.com. Despite what they say, I do judge a book (or in this case a DVD) by its cover. It usually works too.

I guess it was successful with Neverland as well. It wasn’t bad. It just wasn’t what I was expecting. I could tell that something was up as soon as I saw the previews, which were straight-to-DVD SyFy channel releases. Then the menu screen pops up and says “Play Part 1” and “Play Part 2.” Great. I was done with a day of work, it was 7 in the evening, and I just rented a two-part TV series. All I wanted was regular movie – with some special effects, a decent story and cool action scenes.

I hit “Play” anyway. This version of Neverland was definitely low budget, but the twists that they added in made it quite a bit different from previous versions of Peter Pan. There’s an entire back-story to the relationship between Pan and Captain Hook. Like Star Wars and Darth Vader, the transformation from a British con man to Captain Hook is unfolded. I was hooked – no pun intended.

I continued on with part two and wasn’t disappointed. It felt like a classic Peter Pan tale with a bit of Lord of the Rings on a smaller budget and, therefore, with less impressive special effects. The script more than makes up for that though. Keira Knightley is the voice of Tinkerbell. Charlie Rowe, the actor who plays Peter Pan, is convincing in his role. If there’s one thing I hate to see when I watch movies, above all else, it’s bad child actors. Thankfully that wasn’t the case here.

After I was done with the two-part TV series, I still wanted to watch The Three Musketeers. It starts off with a bang, providing action scenes you’d expect to see in the Matrix. That could be said about most of the action throughout the entire movie. While it’s visually spectacular and very interesting to see those kinds of fighting sequences in a setting of 17th Century France, I’m not sure it fits.

There was more than once that I caught myself saying, “That would never happen!” Granted, it is a movie, but more than once things worked out a little too well for the main characters. Those main characters were a little more indestructible than they should have been too. It’s like the end of a horror movie, where the bad guy gets up even though he was thrown off a roof, run over by a garbage truck, and partially eaten by a pack of wild dogs.

I wanted to be being taken away into a tale of royalty, evil plots, and daring rescues, but instead I was sitting there trying to convince myself the movie could be realistic. The over-the-top fighting scenes and convenient escapes made me feel like I was watching a Saturday morning cartoon rather than a big-budget movie.

It also doesn’t help that this movie truly is a remake. The characters have the same personalities as they do in the classic 1993 version starring Kiefer Sutherland, Charlie Sheen, Oliver Platt, Chris O’Donnell, and Tim Curry. The new cast of actors does an acceptable job in this movie. I’d probably even call them “good” if I hadn’t already seen what other actors did with the characters.

This Three Musketeers remake does have charm, wit, and plenty of action. It doesn’t have realism, Keifer Sutherland, Charlie Sheen, Oliver Platt, Chris O’Donnell, or Tim Curry though. Unfortunately I was reminded of that more times than I would’ve liked.
Posted by Batson at 6:25 PM No comments: