Earth Day seemed like a good day to blog on something I've been thinking about for a while: would it be possible to make a credible Captain Planet movie? 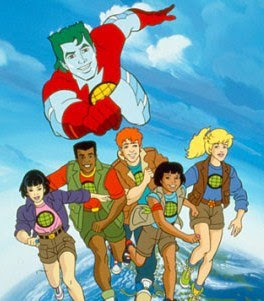 Long before the Lord of the Rings movies, the Planeteers made powerful rings very cool.

The Captain Planet television series was definitely geared towards kids. I remember watching it when I was between 7 and 10 years old, but even then there were times that I thought, 'This is kind of hokey.'

Would it have to be that way though? I think it's possible to create a much more realistic version of Captain Planet, specifically for the big screen. There are rumors that a Captain Planet movie is in the works, which is a very smart thing to do.

Super hero movies are huge right now. Iron Man, Spider-Man and Batman have proven, several times over, to be money-makers at the movies.

Take a look at Transformers. 4 movies and counting so far.

Even historical figures have been reincarnated (to some success) on the big screen.

Sherlock Holmes is the most successful so far, but Edgar Allan Poe (The Raven), William Shakespeare (Anonymous), and Abraham Lincoln (Abraham Lincoln vs. Zombies, Abraham Lincoln: Vampire Hunter) have all been used to create story lines in movies.

Why not turn to a show with characters that have already been developed?

What tone will the movie have though? Will it be something along the lines of the Teenage Mutant Ninja Turtles movies or will it have some seriousness to it, like The Dark Knight trilogy?

I would like to see the studios give a more serious Captain Planet a try -- especially if he had a 21st century makeover.

I found this drawing while Googling. It's a piece by Joseph Grant Parker.

No longer does Captain Planet look like a green-haired McGyver. He has a modern hair cut and a different look, but the integrity of the original Captain Planet look is still there. He still has the big, blue muscles, the same red attire, and the green hair.

He looks a bit like Colossus, but I think this look would work very well for Captain Planet.

He's definitely not The Dark Knight. The edginess and the conflicting emotions don't apply to Captain Planet.

With the super strength and the good guy attitude, Captain Planet is basically a version of Superman, a character that has always been looked at as a credible superhero.

Captain Planet has the whole 'no pollution' stance attached to him, which makes the character a little more 'boy scout' than Superman, but a good script could tone that down a bit.

Something else to consider is that society has changed since the mid-90s, when the cartoon originally aired.

There's a lot more awareness on the importance of being eco-friendly. When you break it down, Avatar was pretty much one big public service announcement on being connected to Mother Nature. There's no arguing with the box office gross Avatar got either.

I think now is probably the perfect time for one of the movie studios to take a chance on a more bad-ass Captain Planet.

Posted by Batson at 9:00 AM No comments: