Choosing a side on DVD menu's -- what's the point?

Most DVDs go to a menu screen after you’re done hearing about ‘the cloud,’ how cigarettes can kill you and seeing a preview for the latest animated film. 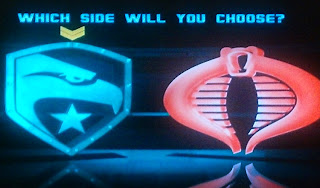 Some, however, give you an option. ‘Pick a side,’ they say.

I’ve run into this twice recently – with the G.I. Joe DVD and The Break-Up DVD.

At first I thought it was a cool concept. Maybe, if you pick Cobra’s side, there’s an alternate ending? Or maybe some special features --- like an in-depth look at Storm Shadow’s sword training.

If you pick the side of the Joe’s, maybe there’s a look at their stunt training.

Same thing with The Break-Up.