One of the most entertaining characters of all of the Masters of the Universe is Evil-lyn, so her casting has to be spot on. She's essentially second-in-command, behind Skeleton, in terms of the villains.

She's ambitious, always eager to move beyond Skeletor and rule Eternia herself.

Due to her smarts and her powers, she's easily one of Skeletor's most valuable henchmen, despite her questionable loyalty.

In terms of the design of her outfit, I don't know that they can really go wrong.  Even though they went a little different route than Filmation in the 1987 movie, that version of Evil-Lyn still looked awesome.  I guess I'm kind of a sentimentalist, so I'd go with the Filmation version and color scheme.

As far as actresses, there are several potential candidates.  Whoever plays Evil-lyn has to have the ability to play a wide range of emotions all at the same time.  Evil-lyn is all about subtlety.  She'll subtly cast Skeletor an evil glance.  Or she'll subtly plan Skeletor's demise while proclaiming her loyalty to him.  Other times she will be in your face about her dislike of Skeletor and her own selfish wants to rule the planet.

Despite her evil ambitions, at times, you did feel a little bit sorry for her.  She was a character that always seemed to have a smidgen of good in her.  Rather than being truly evil, she was simply overcome by her greed. 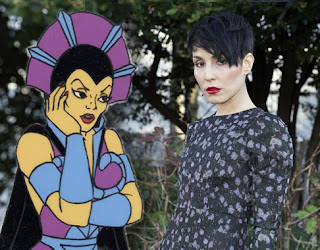 Who has the ability to play such a character?  How about Noomi Rapace?  For those who don't recognize the name, she was in Prometheus, The Girl with the Dragon Tattoo, and Sherlock Holmes: A Game of Shadows.

She's definitely got the looks.  She kind of looks like an evil sorceress in that photo, doesn't she?

Those eyes are piercing!

Rapace could, without question, handle the acting.  She's not necessarily a kick-ass fighter, but Evil-lyn usually relies on her magic powers rather than her physical strength.  Rapace doesn't bring a great deal of name value to the movie, but her acting ability and portrayal of Evil-lyn would easily win people over.  Some cool trailers that showcase her could generate some interest.  I'd be more than pleased if Rapace were to get the part, but I do have a few other suggestions as well. 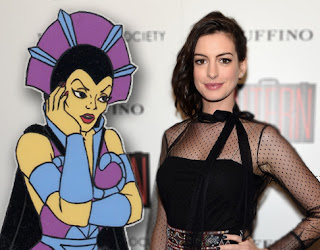 Anne Hathaway is one of my other suggestions.  She has already played a misguided villainess.  I'm, of course, talking about Catwoman.  Hathaway is one of the bigger names in Hollywood, so her playing Evil-lyn would probably help bring some fans into the theater to see the movie.

Hathaway usually sticks to dramas and roles with some meat to them, but she did sign on to play Catwoman in the third Dark Knight movie.  Granted, it was a huge role with a guaranteed massive pay day.

Despite her impressive acting ability, the one thing I'd worry about is Hathaway's ability to play a hardened character like Evil-lyn.  I don't think that Catwoman was ever as evil as Evil-lyn.  Hathaway could handle the intricacies in the Evil-lyn character, but I don't know if she'd do as good of a job with the gleefully evil side of her.  Still, Hathaway playing Evil-lyn would do a world of good for the new He-Man movie. 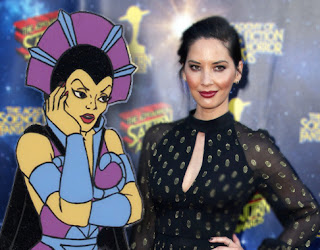 See those eyes right there?  Olivia Munn could give you chills with the right look in her eyes.  That's what I'm afraid Hathaway would lack.  Olivia Munn has the look to her that would make for an impressive Evil-lyn.

She's definitely been on the rise in recent years, starring in movies like Magic Mike, HBO's The Newsroom, and a pair of sequels in Zoolander 2 and Ride Along 2.  I actually haven't seen most of her work, though I did see her play Psylocke in X-Men: Apocalypse.  I actually wasn't overly impressed with her in that.  She didn't seem to be a natural athlete.  In a superhero movie, that's sometimes a requirement.  Although, we already determined that Evil-lyn isn't always the most physical character.

What Munn lacked in acting ability in X-Men, she made up for with her screen presence.  Some people just grab your attention and Munn is one of them.  Munn could succeed with the role of Evil-lyn, though Munn's version of Evil-lyn would probably be more standard than someone like Hathaway or Rapace. 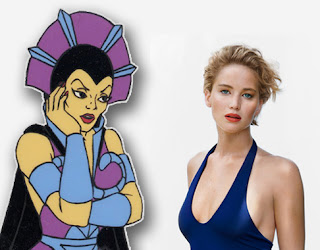 A huge part of me would love it if Jennifer Lawrence went bad and played the role of Evil-lyn.  She is, in essence, the Mystique of the He-Man universe and Lawrence has owned that role after filling some respectable-sized shoes Rebecca Romijn left behind.

Lawrence seems like too much of an obvious choice for a role in the movie --- since she's been in so many big roles already, but she offers a lot to the role.

She's young, so that means she'd hopefully be on board to play the character again if there are sequels.

I'm not sure if she's had her fill of action movies, but she's proven that she can handle some physicality, whether it was as the star of The Hunger Games or playing a combat-ready blue shapeshifter.  In terms of drawing power, she'd possibly be the best choice they could make.  With her legions of fans, the movie would sure to be successful.  Have I mentioned that that's important to me?  Have I mentioned that I want the movie to do really well?  I'm talking two or three sequels well.

Lawrence has got some huge appeal in that area.  She's an award-winning actress to boot and not without merit.  She's played a variety of characters over the past few years, cementing her spot as a top-notch actress.  If she were to accept the offer to play Evil-lyn, I think Lawrence would do the previous versions justice, yet still put her own spin on it, making the character even more interesting than she already is. 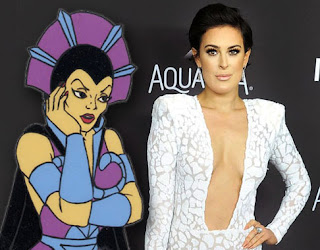 If we're talking about actresses who can put their own spin on things, how about Rumor Willis?  In life, Willis puts her own spin on things as a tattooed, topless rights activist (yep, you read that right).  I guess you can march to the beat of whatever drum you want to when you're the offspring of Hollywood heavyweights like Bruce Willis and Demi Moore.

In addition taking home the season 20 mirrorball trophy on Dancing with the Stars (which shows that she's got the athleticism required to play a superhero role), Willis has been acting since she was just a child.  Despite that, her most watched performances may be from House Bunny and her semi-regular role on the 90210 reboot that was cancelled after five seasons.  She's mainstream without being too mainstream.

Rumer Willis is the type of actress who could do a impressive job with the Evil-lyn character while taking it in a different direction than anyone expected.  What that direction is?  Your guess is as good as mine. 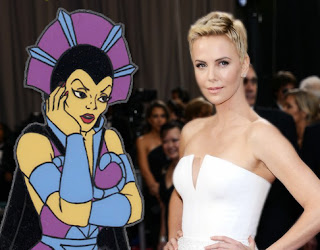 Despite some great actresses already listed above, my number one choice would have to be the incredible, amazing Charlize Theron.  Based on that sentence, you may think I'm a huge fan of hers.  I'm actually not.  I mean, she's OK.  I never saw Monster or The Cider House Rules or several of her other movies.  She's one of those actresses who is regarded as a true actress.  I know that.

I've seen Trail and Error (a good comedy flick if you haven't seen it before), Hancock, and Prometheus.  She did well enough in those movies.

What really convinced me that she'd be an amazing Evil-lyn, though, was her portrayal of the evil queen in Snow White and The Huntsman and The Huntsman: Winter's War.  She absolutely, without a doubt, stole the show in both movies.  Granted, the movies weren't that great, but she made them worth watching.  The costumes and visual effects were impressive as well, adding to her exceptional portrayal, but Theron earned her keep in both of those movies.

On top of her acting ability, she's proven that she's more than willing to take on physical roles like she did in 2005's Aeon Flux.  I'm assuming she'll be doing a little bit of fighting in the upcoming Fast 8 as well.  Plus, Theron is the right age.  She's a very young looking 40-years-old.

Evil-lyn was never a 20-something character like Teela and Prince Adam were.  Evil-lyn was a little bit older, somewhat wiser and, of course, more maniacal.  I don't know if a younger actress would be able to capture that essence the way Theron could.

While I think Jennifer Lawrence, Rumer Willis and Noomi Rapace could all take the character to a great cinematic place, Theron could trump all of them.

Now, here are a couple of people who SHOULDN'T play Evil-lyn.  These are a few of the names I've seen floating around:

Angelina Jolie.  GamesRadar threw this suggestion out there in 2012.  That was 4 years ago, so maybe then.  But, nah.  No.  She played the evil witch/misunderstood Maleficent, but she just does not fit the characteristics of Evil-lyn.  She could probably do the job well enough, I guess, but I'm just not feeling it.

Another option I've seen thrown out recently is Helena Bonham Carter.  Again, nope.  She plays a good villain.  Just take a look at Harry Potter and her role as Bellatrix Lestrange.  She was good in that role, but that role is more that of a stereotypical witch.  Evil-lyn isn't really your standard witch.  She's more of a super villain with witch powers.  At 50-years-old, I just don't see her being Evil-lyn.  I'm not an ageist, but I think she's probably a little too old for the job, especially without the athleticism of someone like Charlize Theron.