All I knew about Prometheus was that it was some kind of space adventure movie – most likely involving alien life forms of some kind.

I didn’t know, until the last scene, that it was a prequel, of sorts, to the Alien movies.

Maybe if I’d known that ahead of time I would have enjoyed Prometheus better than I did. Or, maybe not. I’d put a spoiler alert here, but there’s really nothing worth spoiling, so I won’t bother.

It peaked my interest at the start, when an albino human-like being is shown next to a large waterfall. 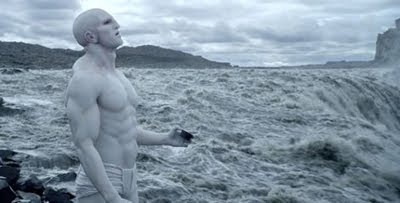 While a ship seems to be taking off into the atmosphere, he takes a sip of something out of a canister and it changes his molecular structure. He falls into the waterfall and then decomposes in the water.

All right, so who’s the guy? What did he drink? Why did he decompose? I’m interested in finding out what happened.

We go to a scene in Ireland, as two scientists find a cave marking – the same as what are apparently in several other places on Earth.

Next scene – what we soon learn is an android, David (Michael Fassbender), wakes several people from cryogenic chambers on a ship in space. The name of the ship? Prometheus.

Meredith Vickers (Charlize Theron) immediately starts doing push ups after her two-year sleep – an indication of her no-nonsense personality throughout the film.

Once everyone is awake, they assemble for a meeting with a hologram of Peter Weyland, who is apparently dead. He introduces the scientists – Charlie Holloway (Logan Marshall-Green) and Elizabeth Shaw (Noomi Rapace) – who let the rest of the crew know what they are in search of. I guess they didn’t know before they embarked on this 2+ year journey. The scientists are confident that their makers – the creators of the human race – are on the LV-223, the moon of a distant planet.

Shortly after the presentation, the crew descends onto LV-223. After working their way through a storm in the atmosphere, they get a glimpse at what the moon looks like. It’s very similar to Earth, with mountains and some trees, but based on the readings of their technology, they need to wear their spacesuits because the atmosphere would kill them within 2 minutes.

From the ship’s window, Holloway sees a path that seems to lead to a dome-like structure. Seems like a good place to land, so that’s what they do.

The ship captain advises that with just a few hours of sunlight left, they should wait until morning before exploring, but Holloway explains that it’s “like Christmas morning” to him, so he tells the crew to suit up. They’re off to explore, but not before Holloway throws a diss David's way.

He asks, David why he’s wearing his helmet, since he’s not human. It’s pretty clear that Holloway has some android issues brewing inside him. 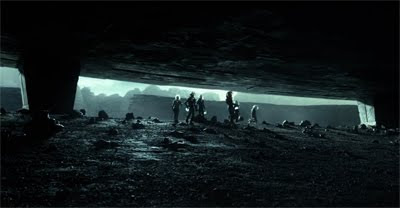 The crew arrives to the dome and finds the entrance very quickly. Considering they are on a foreign planet, they don’t seem too worried about running into anything dangerous. They enter the dome quickly and, thanks to some fancy gadgets, they learn that it’s hollow.

David, the android, figures out how to work the machinery on the walls, it seems, but the rest of the crew is too far ahead down the tunnel to notice. Once David touches the walls, several giant, hologram-like men that resemble MTV’s moon man run through the halls.

The Earth crew tries to follow them, but most of the moon men enter a door to safety. One alien moon man doesn’t make it. The door closes and chops its head off.

As a couple of the scientists examine the head, David unlocks and opens the door. Whoah! This is too much for two of the crew members. After all, they didn’t sign up to find aliens – just to go to a foreign planet in a different galaxy. They take off, headed back to the ship.

Everyone else goes inside the room, where they find a giant stone head and a room full of what appears to be metal canisters.

Uh oh! A storm is approaching. The captain advises the crew and Meredith Vickers tells them she’s closing the doors in 15 minutes, so they’d best be on the ship by then!

The crew loads up the head and David loads up a metal canister (unbeknownst to the rest of the crew). I guess it didn’t occur to them to ask him what he had in the large bag he was carrying.

After almost getting caught in the storm, the crew makes it onboard. Although we find out that the two guys who were too scared to go into the room with the giant head never made it back to the ship. They’re wandering around, lost, in the tunnels. I guess nobody radioed them about the oncoming storm. Thanks a lot, huh?

The rest of the scientists examine the head. They realize it’s a helmet and that the actual head is underneath. They inject it with something to make the brain think it’s still alive. The eyes open up and the head seems to be having a seizure. They quickly enclose it so they aren’t infected with anything infectious. The head explodes some green slime all over the clear box it’s enclosed in.

Meanwhile, Holloway is depressed that the maker he traveled all this way to meet is now dead. True, he didn’t see the rest of the aliens running through the tunnels, but you’d think he’d be smart enough to figure out that there may be more than just one of them.

Holloway is drinking and he’s a mean drunk! He starts throwing more jabs at David about being an android. David one-ups him though, as he plants an alien seed into Holloway’s drink without Holloway knowing it.

David, the android, wants to be human, even though he’s not supposed to have any emotion. The rest of the crew is too stupid to realize this, even though David makes it blatantly obvious by his comments and tone of voice.

Holloway gets infected by that seed that David put in his drink, but not before he gives Elizabeth a little Earth loving. Naturally, even though she says she’s not able to have babies, she gets pregnant. David, who seemed to know this would happen, apparently wants to create life the way humans created him.

Round 2 at the alien cave: as the crew searches for the missing scientists (who had both died after being attacked by a snake-like alien life form). 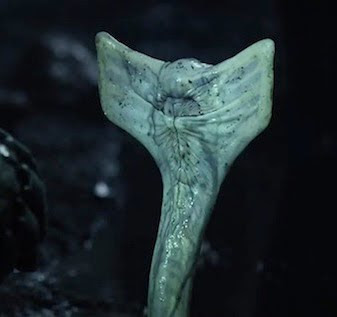 Not David though. He’s busy finding a secret chamber. He figures out that the aliens want to travel to Earth with these tunnels (that are actually a ship) and (I guess?) destroy the humans. David is (apparently?) invisible to these aliens because he’s not human. 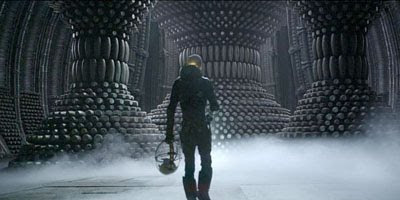 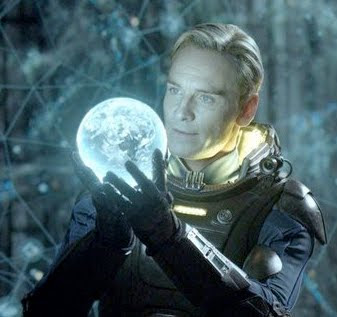 Are you as bored right now as I was with this movie?

This review could go on and on, but here’s the gist: Holloway gets torched by Meredith because she’s not about to have any contamination on her ship, dammit! David tells Elizabeth she’s having an alien baby. She gets in this really cool surgery tube, though, and removes the alien from her stomach. 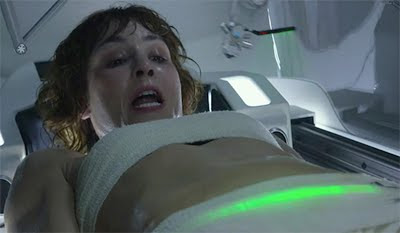 Shocker: old man Weyland isn’t actually dead. They all go back to the alien cave because the old guy doesn’t want to die. He wants the secret to life! The God/alien doesn’t like humans or androids, as he literally rips David’s head off.

We never find out how or why the aliens are mad at the humans. They don’t like androids either because David literally gets his head ripped off. 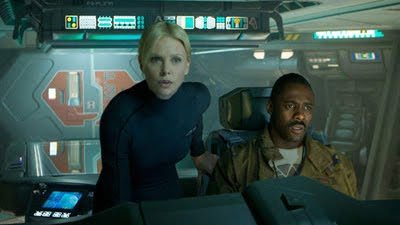 Meredith, the captain and a few other crew members are safe on the ship. All of the scientists, but Elizabeth die.

The God/alien starts to fly his tunnel/ship. Elizabeth tells them about the plan to destroy Earth. The captain says the ship isn’t armed with any weapons. Good idea for a ship that explores foreign planets, huh? It's like sending U.S. troops over to Iraq in a city bus instead of a tank. The pilot decides to make the ultimate sacrifice and crash their ship into the other.

Meredith tries to escape in a escape pod, but crash lands. As the two ships crash to the ground they crush Meredith. Elizabeth Shaw is still alive though. She retrieves the android’s head and goes back to the ship – trying to find another escape pod maybe.

The God/alien didn’t die though! He tries to attack Elizabeth, but she unleashes Holloway (who has now transformed into an Octopus-like creature). He attacks the God/alien and the God/alien gets implanted with the alien creature and we have the infamous alien from the Alien movies.

Elizabeth and the android take off in a escape pod unaware of the new creature they’ve created.

Overall the movie lacks originality, leaves too many questions unanswered (and not in an 'I can't wait to find out what happens next' kind of way), and, sadly, it seems like a cheap imitation of Alien.

Ridley Scott did a great job in the original and, as sequels go, things slowly went downhill. Now, with Prometheus, it just seems like someone who is desperately clinging on to something that was once successful.

I guess the film was a financial success, which means there's likely going to be a sequel to this prequel. I'm not going to waste my time on that one though. 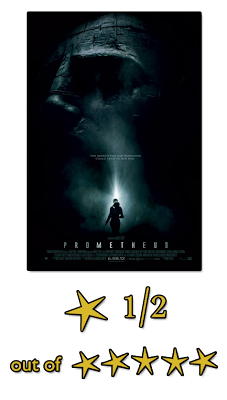 Posted by Batson at 4:29 PM No comments: