I went to Big View Diner after reading something online that mentioned them having a pretty impressive dessert section.

Sure enough, they did have a nice collection of desserts.

Problem is: they only have one cupcake. It's an awesome looking chocolate cupcake with chocolate frosting on top and chocolate candy baked inside. It was all or nothing with this cupcake though. One chance for Big View Diner to make an impression. 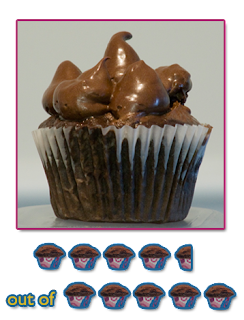 I got the chocolate cupcake, brought it home and ate it later that night.

It was amazing! Seriously, it was probably the best chocolate cupcake I've had all year long.

The frosting was incredible rich and creamy. The cupcake was moist and chocolatey. The chocolate kisses that were baked inside the cupcake in melted form were like a delicious finishing touch on an already superb cupcake.

I think the thing that really stood out and made this cupcake so good was the mixture of chocolate flavors. You had it in cake form, frosting form and candy form -- all in one cupcake!

I only got one cupcake because I figured 'Why get two when there's just one flavor?' That was a mistake I shouldn't have made. I'll have to make a trip back to South Charlotte and get another cupcake soon.