If you remember seeing the previews for Jack and Jill and thinking, ‘That movie doesn’t look very good,’ then you were right.

I watched Jack and Jill the other day and it’s kind of a shame I did. That’s close to two hours of my life I won’t get back.

I’m being a little too harsh, but it wasn’t a very good movie.

I’m kind of shocked, reading up some statistics on it now, that the movie wasn’t a total box office bomb. Critics dogged it (rightfully so), but the movie didn’t lose money. I guess that says something about Adam Sandler’s star power.

The entire selling point of the movie is that Adam Sandler pulls double duty, playing the roles of identical twins Jack and Jill. That’s also the problem with the movie.

Sandler is so over-the-top while playing Jill that it becomes a very unrealistic movie.

I know it’s a comedy, but can we at least keep one foot on the ground with reality?

I’ve always been so-so on Adam Sandler movies. His exaggerated and loud acting doesn’t always equal funny. In recent years he seems to have mellowed on that front. 50 First Dates was amazing because he wasn’t running around like a ranting, raving lunatic. Adam Sandler’s character was a normal guy.

Grown Ups, despite the minimal effort put into the script, was alright.

Some of Sandler’s earlier films were rough to sit through though. Happy Gilmore wasn’t too bad. I Now Pronounce You Chuck and Larry was watchable. So was Click. I only saw half of Little Nicky though and that was enough. I saw bits and pieces of The Wedding Singer, but never the entire movie. Maybe I'll give that one a shot.

The movie begins when the Bronx born-and-bred Jill goes to Hollywood to visit her identical twin brother, Jack, after their mother dies.

Jack has a family in the form of two kids (neither of whom are cute or entertaining) and Katie Holmes, who has been so busy being Mrs. Tom Cruise that she seems to have lost most of the acting talent she once had. She seemed void of any personality whatsoever and definitely doesn’t have chemistry with Sandler.

Jack, a successful commercial director, is often embarrassed and annoyed by Jill’s antics – a subplot in the movie – especially when her weekend trip turns into a lengthier visit.

It becomes obvious to Jack that what Jill needs is simple: someone to love – the main plot of the movie.

The former Godfather is probably the best part about this slapstick comedy.

However, between Regis Philbin, Drew Carey, Billy Banks (you know, the Taebo guy?), Jared (from the Subway commercials), Johnny Depp and Al Pacino, there were far too many cameos in the movie. All it was missing was the Dell Dude and an appearance by Flo, from the Progressive Insurance commercials. 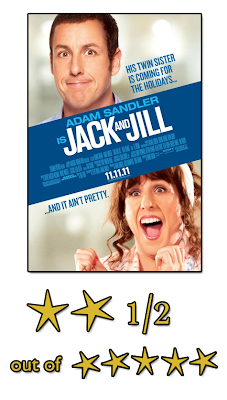 Besides an abundance of cameos, the movie has a little bit of love, a little bit of physical comedy, and a small twist or two. What it lacks, unfortunately, is comedy that garners anything more than a chuckle.

The result is a 93 minute movie that seems more like the second Transformers...you know, the one that left your legs cramping after you saw it in the movie theatre? The one that lasted 150 minutes?

If you’re going to see this movie, I would recommend seeing it the way I did: for free. I borrowed it, which made it more bearable when it was over.