I was going to see the sequel G.I. Joe flick earlier, but I unexpectedly found that the normal rate for a evening ticket to a movie is at least $10.00. AMC and Regal Theatres were actually more expensive than $10.00.

So, I decided to wait and go to a mid-day showing. $5.00 ticket? Much more reasonable. The medium pop and popcorn still cost about $12, but oh well. Popcorn has always been part of the movie theatre experience for me. Evidently is just now a costly one.

I was worried for a moment that I wouldn't get to see the movie. There were projector problems throughout the previews. The Wolverine, opening in May, sounded very cool. The black screen I was watching left me eagerly listening to the entire trailer. Maybe it's better that way. It'll be more of a surprise when I watch it.

Thankfully they fixed the video issue before the movie started.

I was anxious to see how they would address the absence of several members of the original cast, including, but not limited to: Ripcord (Marlon Wayans), General Hawk (Dennis Quaid) and Scarlett (Rachel Nichols). Their absence was indirectly addressed -- basically saying, "Hey! Here's the new team of Joes since the last movie you saw," -- and after that it moved on, not looking back. They accomplished this through a voice over intro and it worked pretty effectively. 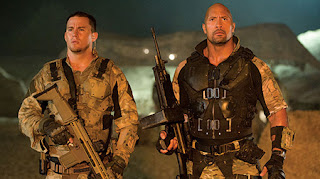 What didn't work so effectively was Duke and Roadblock's relationship, mostly due to The Rock and Tatum's acting. It seemed as though they probably had fun working together and became pals in real life, but it didn't translate very well into the movie. They had what were supposed to be a few comedic scenes. Instead of being funny and off the cuff, the vibe was rehearsed and kind of boring.

That situation was solved somewhat early on into the script though.

Eventually the G.I. Joe team gets ambushed, thanks to Zartan (Arnold Vosloo), who, just like the end of Rise of Cobra, is still disguised the President (played by Jonathan Pryce).

Actors often say it's hard to convey two different people in the same movie. If that's the case, Pryce did an incredible job. 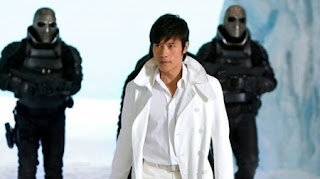 Cobra Commander, Storm Shadow, and Snake Eyes characters all return to the fold (even if Cobra Commander was played by a different actor this time around), making up for the lack of familiar faces.

Something the last movie nailed and this one did even moreso was the idea that Cobra can come up with any kind of weapon. Things that may not be possible in real life are possible in the G.I. Joe universe. All kinds of contraptions and gadgets are put to use in Retaliation. Cool new weaponry definitely made for a fun movie, but I think the best action scenes still happened with Storm Shadow, sword in hand.


The scene that first made me want to see G.I. Joe: Retaliation in the theater was the one on the side of the mountain. I saw the trailer and a few short clips of a fight while people were rappelling down the side of a mountain. That hooked me.

Thankfully that scene didn't disappoint. That one -- and the one that lead up to it -- were probably the best parts of the entire movie and two of the more original battle scenes I've watched in recent memory. Definitely made the entire movie worthwhile.

At one point the Joe team seeks help from the man the team was named after: General Joseph Colton (Bruce Willis). I get the feeling Willis' character was supposed to provide a little comic relief, but his addition to the movie wasn't really needed. Just like with Tatum, The Rock and Willis don't have the greatest chemistry. It seems forced.

The Gen. Colton character served his purpose in the plot though.

Speaking of characters, I was a little disappointed with Cobra Commander. He came off as more Darth Vader than the slimy, cowardly, annoying Cobra Commander of the animated series and the comics. It worked fine -- and the outfit was spot on -- but I had really high expectations for Cobra Commander in this movie and they weren't met. 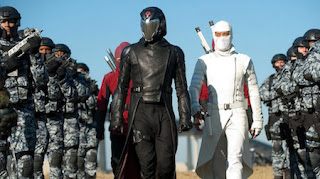 The plot was more classic G.I. Joe than the first one was. There was one major flaw, in my opinion. Storm Shadow, after an absence, shows up alongside Cobra Commander again and there's no explanation as to how he got there. The Commander perhaps didn't even know he was gone? I don't know. Glaring error there though.

One thing they did with this movie -- much like the animated series -- was to incorporate different locations in all kinds of climates and geographical settings. I remember watching the animated series, where there would be a battle in Antarctica. Then there would be a battle in an African jungle. Then maybe an air strike. The quick switches in settings always made for a story that progressed quickly. This movie mimicked that approach.

The story may not have been incredible, but neither was the animated series. That's kind of the fun of the entire franchise. They cross over that line, away from realism, just a little bit. It's not enough to make the movie a fantasy, but it's enough to add an entertaining element of make believe to the movie. 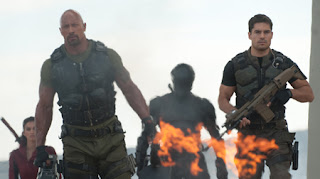 At the end of the movie I was left wanting to see the next installment. There are no additional scenes after the credits, so obviously there's no set story arc for a possible G.I. Joe 3. There doesn't really need to be though.

I'm perfectly fine with a new quest by Cobra to take over the world. That was the beauty of the animated series. You got a new story each week.

In this case it's a new story every few years (hopefully).  I'm just hoping there's a little more continuity in the next one.