I'm back with another blog on how the He-Man / Masters of the Universe casting should go.

After looking at Teela and Beast Man already, today's focus is on Man-At-Arms. He's Teela's father and the inventor/gadgetry whiz of Eternia. He's one of the most trusted characters in the series and is always there to save the day with a new invention or weapon.

Basically, he's to He-Man what Alfred is to Batman or what Felicity Smoak is to The Green Arrow in Arrow.

His depictions in comics versus the animated TV shows are, more or less, the same.

Man-At-Arms in the 2002 Mike Young Productions version was, of course, much younger and more physical.  Filmation's version was never really intimidating, despite being muscular and skilled in hand-to-hand combat.  Man-At-Arms, in 2002, really was a Man-At-Arms.  He wasn't Capt. of the Guard, but he was always there with some kind of weaponry ready to aid He-Man. 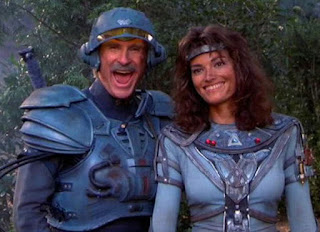 I'm fine with whichever version they end up going with (since they're so close to each other), but the one thing they can't change is the mustache!  They thankfully kept the mustache in the disappointing 1987 Masters of the Universe movie.

Although, in the 1987 version, Man-At-Arms looked the part, he was too much of a wimp.  I felt that he should have been more intimidating a presence than they made him out to be.

To be honest, the 1987 movie version of Man-At-Arms was kind of a dorky version.  I don't recall him being of much use to have around.  Then again, neither was Teela.  So disappointing.  That's why I'm hoping for better casting, a better story, better costumes and a better movie, in general, this time around.

On that casting note, it begs the question: who should play Man-At-Arms?  Today I only have three choices for the job. 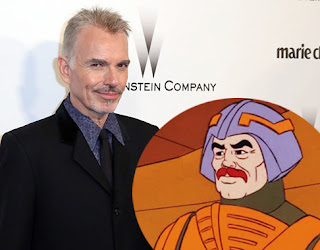 Billy Bob Thornton is one of them.  He's, perhaps, not the most conventional choice, but I'm kind of intrigued because of that.  I feel like he'd be able to take the character and do something different, yet impressive, with it.

He's a big, recognizable name, but it's been a while since he was in a major movie, so I'm assuming his asking price isn't too extreme.  I don't know what kind of budget the new Masters of the Universe movie has, but I'm assuming it's not as large as that of ... say ... Transformers.  Maybe a sequel or sequels would receive some funds, but the first one?  Probably not.

Thornton isn't terribly muscular, but he doesn't give off an elderly, feeble vibe either.  He seems like he could be a scrappy dude in a fight. 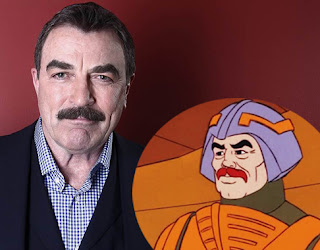 If you're not a fan of that suggestion, how about this one?  Tom Selleck.  I do have hesitations about this choice, however.

One thing is for sure: he's got the mustache for the job.  However, if Selleck were to be Man-At-Arms, his version would be more along the lines of the Filmation version -- knowledgeable and with rational thought.  Probably a gadgeteer, too, but the physical presence?

Selleck is 6'4, so he's imposing based on his height, alone, but he's also 71-years-old.  He still seems like he could play the role of a tough, old bastard.  A younger actor may be a little better though.  That's my only worry about Selleck.

His acting has been proven time and time again.  That, he could handle. 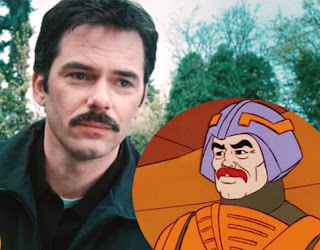 Lastly, there's the guy who would get my vote: Billy Burke.  He played Bella Swan's father in the Twilight series.  Besides that, he was in ... well, not too much.  He did have a few roles in TV shows like 24 and The Closer, but most of his other jobs have been bit roles.

5 (or 6, was it?) appearances on the big screen in the Twilight series is a pretty good resume filler though.

Burke has the ability to play a stern, yet caring character, which is kind of who Man-At-Arms is.  Man-At-Arms will get irritated with Orko and readily do battle with Beast Man or Skeletor, but he's also usually able to keep his cool and not make foolish decisions in the heat of battle.

At 49-years-old, Burke would probably be able to handle action scenes that require hand-to-hand combat or running whereas I'm not sure Selleck could.  Thornton could probably handle the action scenes, but would he be as convincing in a fight?  I don't know.

I think Burke offers a nice balance of the characteristics that Man-At-Arms is supposed to have, so Burke is my choice.

Posted by Batson at 1:17 PM No comments: