Don’t you just hate those dry periods for movie releases? It seems like it happens a few times a year when there’s no movies you anxiously want to see. That’s how it was the other day when I made a stop by the Redbox.

The Avengers DVD came out last week, but I already saw that in the theatres.

I spent a few minutes browsing through the selection of movies, but was having trouble finding something. Some of them didn’t even sound that bad, but they were all on the same level, so it was tough making a choice. When you’re in the mood to see a good movie, you don’t want to spend two hours watching something, only to find out that it’s a dud.

For lack of better options, I went with Battleship. I heard that it bombed in a big way at the theatres, but I remembered seeing previews and thinking it could be decent.

I was surprised to see that Gambit was in the movie. 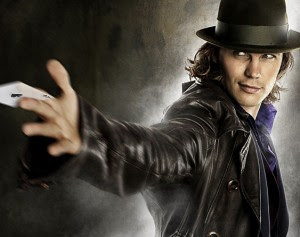 I didn’t know the actor’s name, so I Googled him. Turns out his name is Taylor Kitsch – a Canadian model-turned-actor.

He was convincing as Lt. Alex Hopper, an all-in, goofball whose action before assessment way of life clashes with the organization and responsibility that being in the Navy requires. Adding to the rather random cast was Leam Neeson and Rihanna, in what I assume was her first big-screen acting role. I didn’t have any issues with anyone’s acting actually. Everyone was realistic and convincing for a film that centers on aliens invading Earth.

There were a couple of storyline faults. For example, why did the aliens want to destroy anything metal? Why didn’t the aliens seem to take mercy on the humans at times? Why did nobody try attacking the force field that surrounded the alien craft? It probably wouldn’t have worked, but if aliens ever did attack, I’d hope someone would at least attempt to break their barrier down.

If you're in an overly critical mood, then you may want to stay away from this one, but if you want to see a decent action hero-like flick with quality CGI and a story that involves rising to meet the challenge, no matter the odds, then check it out. There's been far worse movies -- the Expendables anyone? -- than this one.

I’m not sure why it bombed in the theatres because, beyond a few things like I listed above, it was a decent flick. Maybe it’s just that my expectations were so low that when it wasn’t a completely awful movie, it moved up a few notches?

Whatever the reason for my enjoyment, it was a $1.25 well spent. It’s possibly even a movie I’d buy if I saw it in a $5 or less bin at the store a few years from now.

Hopefully Taylor Kitsch can get a few hits under his belt because he seems to have what it takes to be a decent action star, but he's taken a lot of heat for the failure of this movie.

Posted by Batson at 3:11 PM No comments: