Charlotte Cupcakes - It's a Piece of Cake 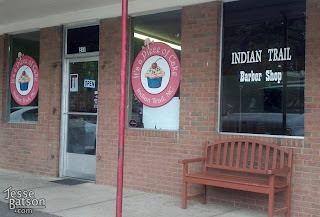 It’s A Piece of Cake is located in a small strip mall near the Ace Hardware.

I drove by a couple of times before, but each time the store looked like it was closed. I called ahead to make sure it was actually open. It was, so the Indian Trail cupcake taste test was good to go.

The cupcake shop isn’t much to look at inside. There was a display case, but there were a bunch of seemingly random things in there as well. It was almost like a garage sale. It was like a pawn shop-turned-bakery.

Nonetheless, there were a few different flavors of cupcakes in plastic six-packs in the display cases, so I chose three of them: a Twix cupcake, an Almond Joy cupcake, and a chocolate cupcake.