Today marks one year since ODB and Eric Young won the TNA Knockout Tag Team Titles. While I throw out a congratulations to ODB on that accomplishment (CM Punk is the only other person to have held a title for over a year in recent memory), I can't help but feel disappointed that for an entire year the division has been a joke.

ODB and Young are comedic gems for TNA. They're entertaining to watch by themselves. Together, they make the perfect odd couple.

However, the fact that a male has been one half of tag titles that are meant for women goes to show that the titles aren't being taken seriously. If that's the case, then they should be scrapped altogether.

The fact that the titles aren't taken seriously kind of begs the question: could a women's tag team division ever be taken legitimately?

Good women's tag team wrestling is probably too much to ask for since WWE and TNA have a hard time getting it right with the guys. 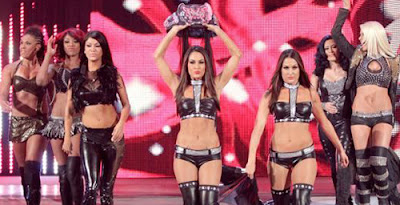 I don't get it though. It seems like such an easy thing to do. With so many women on each roster and not enough TV time to go around, it seems like pairing them up in tag teams would solve that issue.

Last year I honestly thought we'd see WWE introduce women's tag team gold. Now, with Eve, Kelly Kelly and The Bella Twins long gone, I understand why they didn't. For a while, though, with over a dozen women on the roster, it seemed like starting a tag division was the sensible thing to do.

The teams wouldn't have even been that random. You had The Bella Twins (they're twins...need I say more?), Beth Phoenix and Natalya (the Diva destroyers), Kelly and Eve (the models), and Kaitlyn and AJ (the real-life BFF's). For some reason, WWE never jumped on that potential.

While I don't think they would have produced any outstanding story lines for the titles, I think a pair of butterfly belts could have made the random Diva tag team matches a little less random.

While TNA hasn't been doing anything with the women's tag team belts they created in 2009, the division has done some good for the company. 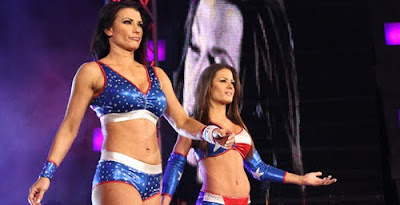 At first, Tara and Miss Tessmacher were nothing more than a thrown-together tag team. They took the initiative to make something of their pairing though. Collectively they called themselves TNT (Tara n' Tessmacher), they got matching outfits, and they started using tag team maneuvers.

The more important aspect here, however, is that once they split TNA had an instant feud over the Knockouts Title. Like any good tag team split, it culminates with a feud. One half of the team goes heel, while the other goes face. In TNA's case, Tessmacher became a Knockouts Champion and entered into a multi-month feud with Tara.

Some legit women's tag team wrestling could be on the horizon. The Blossom Twins recently had a match on Impact. Meanwhile, Cameron and Naomi have finally moved beyond being Brodus Clay's bootylicious backup dancers and are now tagging together in matches on Superstars and Main Event.

The problem is: there's only so far both teams can go.

With little-to-no other tag teams in TNA's division, The Blossoms don't have much competition. As for the Funkadactyls, they get to compete against thrown together teams like Aksana and Tamina or Natalya and Alicia Fox.

With a little bit of effort, a few call ups from NXT, and a few matching outfits, I think both companies could have halfway decent women's tag team action.

I'm not holding out hope for it happening though.

Posted by Batson at 8:00 PM No comments: