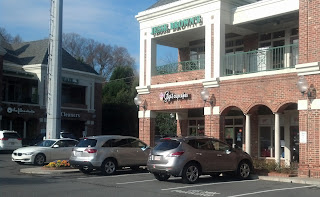 For some reason I’m just finding out about Gigi’s Cupcakes.

I Googled “Charlotte Cupcakes” several months ago when I started writing these reviews and I missed Gigi’s.

It’s located in the Sharon Corners Shopping Center, but it doesn’t stick out, even if you’re looking for it.

The shop is tucked way back in the corner, underneath Jesse Brown's. Admittedly, I missed the turn at first, so I had to make a loop through an entirely unrelated neighborhood in order to actually find the shop.

It’s a smaller shop in size, with a couple of display cases on each side of the cash register, but the cupcakes sure aren’t!

Just looking at the display case you can tell that there’s a lot of effort that goes into the cupcakes. The frosting is piled on – three layers up – and some of the cupcakes had additional toppings and decorations as well.

How good they tasted, I wasn’t sure, but they looked impressive.

I was very tempted to get the Peanut Butter Cup and Salted Chocolate Caramel cupcakes, but the cupcakes at Gigi’s aren't terribly cheap, so I figured I'd better stick with just two of them. I felt a little odd ordering a “Miss Princess” cupcake, but it looked delicious, so I put aside the name and got the cupcake anyway. It was white cake baked with strawberries.

A triple layer of cream cheese frosting was on top with pink sugar crystals on top of that. Oh, yeah. A pink crown was on top. The crown made me feel like I was attending a seven-year-old’s birthday party.

Nonetheless, the cupcake tasted great. I’m pretty sure I’ve had better tasting strawberry cupcakes (this one wasn’t bursting with flavor), but at the same time it was very good.

The only complaint I had was that I had a large goop of frosting left on my plate when I was done with the cupcake. It was too sugary to eat by itself and there was just too much of it. Thankfully, I had some pretzels, so I had a couple of frosting-dipped pretzels, which were almost as delicious as bark-covered pretzels. 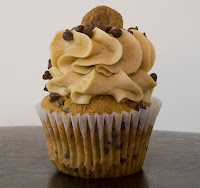 
The positives: the cookie dough cupcake was definitely worth the stop. It's probably going to lead to a second stop on my part as well.

The negatives: there was too much frosting on the Princess cupcake. The fact that it's called 'Miss Princess' kind of bothered me too. I think they need a manly version of a strawberry cupcake.

Cost: they're right at that $3.00 price -- not entirely cheap, but they are large and they pack on the extras (sprinkles, chocolate chips, etc.).