Casting the He-Man movie: The Sorceress

I've looked at a few different characters from the He-Man universe so far, giving my recommendations -- or my 'dream casting' --- for each of them.

Today, I'm taking a look at who could play the Guardian of Grayskull, perhaps one of the most crucial parts of the Masters of the Universe character list.  She's an interesting character.  While her powers leave her vulnerable outside of Grayskull, when inside the castle she is one of the most powerful people on Eternia.  She's also one of the most important, with the goal of keeping Grayskull's secrets safe and out of the hands of Skeletor.

She's been depicted in various ways.  She was quite different in each of her incarnations -- from the Filmation series to the 1987 movie to the 2002 version, courtesy of Mike Young Productions.

She was much too old in the 1987 Masters of the Universe movie.  They didn't cast her well at all there.  Besides that, she was weak.  Talk about a mostly useless pawn in the script they produced!  I don't know if she even had a speaking line in the entire film.  Her costuming was alright, but not indicative of the He-Man origins and history.

The 2002 Mike Young Productions version was much better, showcasing the Sorceress as a fighter and strong-willed woman.  The design of her outfit made her out to be half warrior and half angel, with a little bit of almost an Egyptian flair.

There are some other versions of the Sorceress, including the New Adventures of He-Man version, but my overall favorite has to be the Filmation version.  She took on the colors and attire of a falcon in her human form.  While they'll definitely have to update that version in the upcoming He-Man movie,  I'd like to see them adhere to some of the Filmation design.

Now, onto the actresses who could play her! 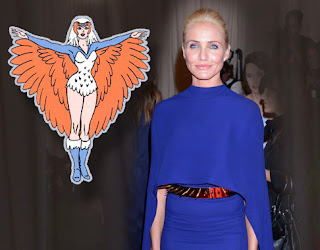 How about Cameron Diaz?  She's not my first choice.  Or probably my second, for that matter.  However, at 43-years-old, she's got a certain maturity to her now.  She's old enough to be the mother of a 20-something woman.  I don't know if she wants to play that part --- if she's secure enough in herself to play the part of a mother to a young woman.

When it comes to her acting ability, I think she could pull off the character.  She's got a bunch of acting experience, obviously.  It'd be nice to see a hell of an actress get the role and run away with it.  However, Cameron Diaz could get the job done.

I'm not sure about her demeanor.  The Filmation Sorceress had a very classy demeanor, even when faced with adversity.  The Bad Teacher actress is probably more suited to be in a screwball comedy than an epic hero adventure, but I'd be intrigued to see how Diaz would handle The Sorceress role. 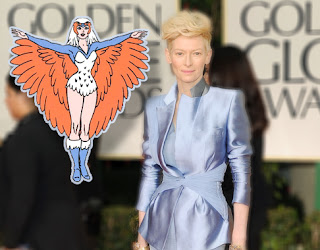 Another option (one I like better) is Tilda Swinton.  I'd seen her here and there, but it was her appearance in the Dr. Strange trailer (yeah, it's ridiculous that she was cast for that role ... that's another story for another time) that had me thinking she would be a good Sorceress.

Swinton would not be as demure or elegant as the Filmation Sorceress.  Swinton would, no doubt, bring a little more edge to the role.  Maybe a little more like the Mike Young Productions version.  She's a good actress, though, and The Sorceress could use a little bit of an edge -- so long as they keep that falcon design.

Swinton is 55-years-old, which is a little bit more believable as the mother to Teela (hopefully that wasn't a spoiler!) than Cameron Diaz would be, especially if Teela was played by Scarlett Johannsson, who is 31-years-old.  She's played a variety of roles in a variety of movies, from dramas to comedies --- ranging from big-budget, studio-funded projects to independent films.  It's not out of the realm of possibility to think that she'd play a character like The Sorceress, especially given her upcoming role in Dr. Strange.

Swinton's take on The Sorceress could be a great balance of mystique and avant-garde. 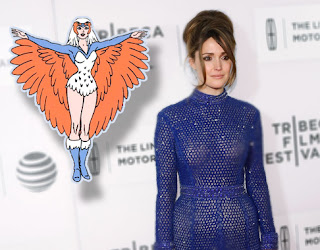 One thing about the Filmation series is that The Sorceress looked more like a slightly older sister to Teela than a mother.  Maybe that has something to do with being a mystical creature.  Who needs face cream when you have the powers of Grayskull?

If we're going for a young actress, there's always Rose Byrne.  She's just 36-years-old.  A little young to be The Sorceress, but, again, if we're going the Filmation route, then why not?  An ageless Sorceress, or a slow-aging one (kind of like Wolverine in X-Men) would work.

While this isn't the route I'd probably go, I do think Rose Byrne would do an exceptional job portraying Grayskull's protector.  Byrne has a certain class to her.  If you've seen some of her movies, you probably know what I'm talking about.

Even if she's in a raucous movie like Neighbors or playing an undercover, lingerie-wearing agent like she was in X-Men: First Class, she's still got a certain quality to her.  Beautiful, intelligent, confident, sophisticated.  I don't know if Byrne is actually any of those things in real life (well, she is beautiful).  Certain people give off certain vibes though.  Those are the vibes she gives off.

In playing a character like The Sorceress, I think those qualities are important to have.  Byrne's real-life qualities could result in a very good portrayal of The Sorceress. 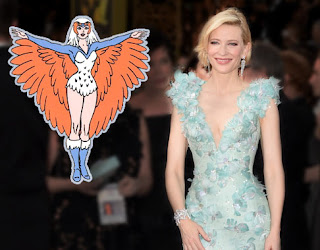 I think my number one choice would have to be Cate Blanchett, though.  Just like Swinton, Blanchett is sometimes more of a colder, edgier character.  She doesn't always give off the warmth, in her roles, that some other actresses do.  Even as one of the good guys as part of the Lord of the Rings series, she seemed a little intimidating.

However, Blanchett, in real life, has a warmth and sense of humor to her that would work well in taking the Sorceress role.  She's 47-years-old, so she's kind of a healthy medium between Cameron Diaz and Tilda Swinton.  She's in good shape (which is probably a requirement, due to the costuming).  Athleticism doesn't really matter in this instance because The Sorceress doesn't go running around, wielding a sword.

Blanchett has all the tools to embody the strength, grace, and warmth of The Sorceress (without taking herself too seriously).

Posted by Batson at 4:05 PM No comments: