Ant-Man and The Wasp - reviewed. 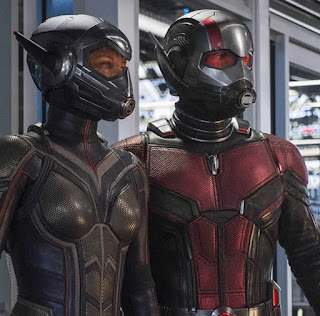 The first Ant-Man movie was kind of a surprise success.

So could the sequel live up to the higher expectations?

This time around the action is doubled, of course. In addition to Ant-Man, we have his love interest: The Wasp.

It's double the fun in this case.

Just like Ant-Man, she has the ability to shrink and grow in size (though she may not have yet gotten to grow dozens of stories in the air the way Ant-Man has).

The fun thing about The Wasp, of course, is that she can fly.  Ant-Man rides insects, but he can't naturally fly.

The Wasp, with her wings, can take to the air and definitely takes advantage of that aerial ability throughout this movie.

I honestly haven’t kept track of the box office for this movie but I liked it a lot.  I hope it did well.  I'm assuming it did, based on the positive reviews I've heard from friends. 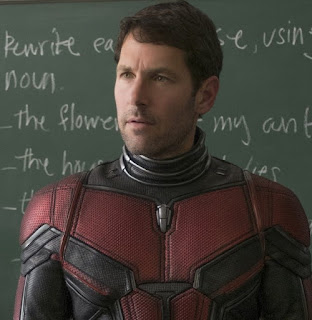 Paul Rudd made this character his. He owns the role the way Robert Downey owns Iron Man or Hugh Jackman owns Wolverine or Margot Robbie now owns the Harley Quinn character. He’s so good at it.

The humor and the action. His portrayal of the character makes this movie such a comedy, but in an entirely different way than a movie like Guardians of the Galaxy.

Ant-Man and Ant-Man and The Wasp aren't necessarily as big and bold as Avengers or as loud and colorful as Thor: Ragnarok or Guardians of the Galaxy 2, but it sure leaves you walking away as a satisfied comic book fan.

I don't know how well Rudd's portrayal fits into the traditional Ant-Man comic book depiction (never read an Ant-Man comic), but it works superbly well on the big screen.

He is taking everything seriously in terms of the sometimes dire situation going on in the movie, but Scott Lang (Rudd) can always interject some humor into the situation — much to the annoyance of Hope Pym (Evangeline Lilly).

She takes more of a straightforward approach in solving the challenges ahead of her.  That contrast in their characters makes for a fun yin and yang dynamic.

They're not a well-oiled duo like Batman and Robin.  They clash and butt heads, but that's what makes them entertaining in this sequel. 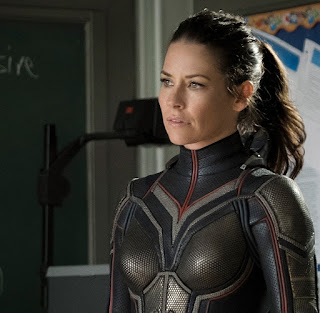 Speaking of Lilly, some women get better with age and she’s definitely one of them!

Hope Pym is another character in the Marvel Cinematic Universe that doesn't necessarily jump off the screen and say 'Hey! Look at me!' but there's a lot to the character.

Her enhanced flight abilities were actually some of the best and most creative fight sequences I've seen in a couple of years.

I won't spoil too much in case you haven't seen this, but the hotel restaurant and kitchen fight scene was particularly good!

Wonder Woman or Superman or Thor can't shrink and grow in an instant in order to do battle against the villains in front of them.

Lilly and Rudd's ability to captivate at the right moments and almost be subtle in their acting in a lot of ways makes the final product very interesting.

It's definitely an ensemble project.  While Ant-Man and The Wasp are, as the title suggests, the rest of the cast are important here, too. 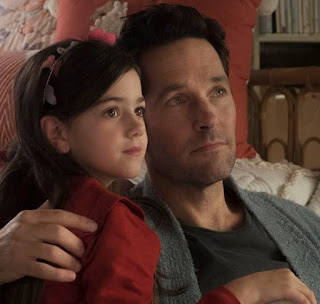 Let's start with Scott Lang's family.  His daughter, Cassie, was a motivating factor for him in the first movie and she's just as important in this sequel.  In fact, I think she may be more important.

Learning from his previous mistakes, Lang makes it a point throughout this movie not to violate his house arrest so he can see his daughter on his terms again.

His daughter isn't just a source of inspiration for keeping on the straight and narrow.

She's got a couple of scenes that she kind of steals, honestly.

A lot of sequels kind of forget about the child cast members that made the original memorable to begin with.  It's not an action movie, but The Santa Clause comes to mind.  By the third movie it was all about Tim Allen as Santa Claus and his child, his ex-wife and her new husband were all seemingly forgotten. 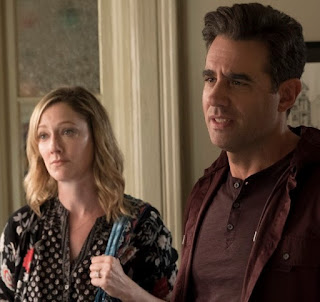 Speaking of ex-wives and new husbands, Scott Lang's ex-wife (Judy Greer) and her new husband (Bobby Cannavale) are also in the movie.  They provided some drama in the first movie, but they provide a lot of the comedy in Ant-Man and The Wasp.

Cannavale was a smidgen over-the-top in some instances, but I'm sure he was directed that way.  That's part of his character in this movie, really.

Even though she's, more or less, a secondary character, it's nice to see Greer get a role in the Marvel Cinematic Universe.

She's played second fiddle to characters in mainstream movies over the years, but this role feels a little bigger than those.  She's not the snooty best friend or plotting coworker.  She's the caring (and sometimes off-the-hinges) mother.

It's a good role for her. 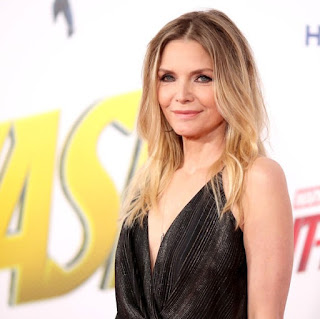 Michelle Pfeiffer swapped over from her iconic role as DC's Catwoman to the Marvel Cinematic Universe as the original Wasp -- as Hope Pym's mother.

Her character --- specifically, finding her --- is the plot point of the entire movie.

I should say that finding Janet Van Dyne (Pfeiffer) is the connecting plot point, tying together the sub-plots and complicating sub-plots as well.

Again, I'll try not to spoil too much, but Pfeiffer did well in this role.  I'd be anxious to see them expand on her character a little bit if a third movie is released.

I thought Pfeiffer was a good pairing for Michael Douglas' character: Hank Pym.  Hank didn't have as many moments in this movie, but he had several in the first.  Understandably, there's not as much meaningful screen time for him this time around because there are more than a couple of new characters. 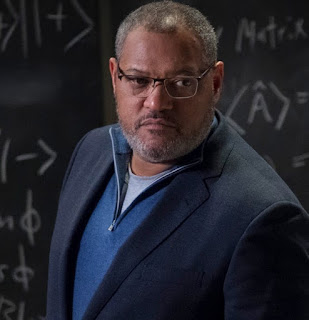 One of those new characters was Dr. Bill Foster (Laurence Fishburne).  I actually groaned when I saw Fishburne on screen.

He, too, is jumping over from DC (he was Perry White in Man of Steel and Batman v. Superman: Dawn of Justice).

I don't exactly have anything against Fishburne.  I really liked him in Akeelah and the Bee and The Matrix, but I thought he failed in his role on C.S.I. and don't think he was the right choice for the Perry White character.

I would've preferred to have seen a lesser known actor in this role.  It came off, to me, like he was given the role because he's an established name --- not because he really offered much to the role or the movie itself.

That being said, he was fine.  This casting didn't hinder the movie in any way.  He's there.  His character served its' purpose, but wasn't necessarily memorable. 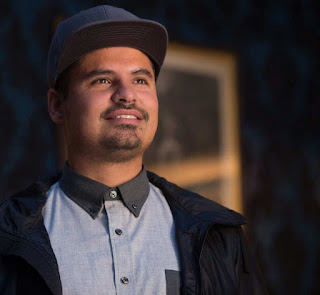 One character who was fun: Luis (Michael Peña).

He and the rest of his cohorts also decided to put their criminal ways behind them and start, appropriately enough, a security business.

They're trying to land a major client by offering insight on how their security system is lacking.

They would know since they have broken into several businesses in the past.

When it came up this time around, the flashback sequence was welcomed and fun, but didn't have the surprise factor.  Still, Luis and the rest of Lang's buddies added a lot of entertainment to the movie and it seemed to me that they had a more expanded role this time around. 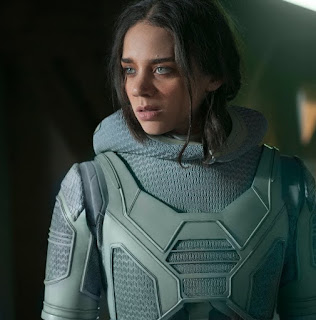 On the villain side of things, we have Ghost a.k.a. Ava (Hannah John-Kamen).

Her character's abilities were a lot of fun.  Upon seeing the previews I knew I wanted to see her action scenes.

The action scenes did not disappoint.  They were interesting, mixed her own unique abilities with Ant-Man and The Wasp's abilities.

However, her character was a little bit weak.  I blame that on the story behind her character.  It was more than a little convoluted --- or maybe lackluster is the better word.  The problem is: that messy story is a big part of the movie.

It's why you care (or, in my case, don't) about the Ghost character.

She's not a straight villain, by the way.  Her character is more complex than that. 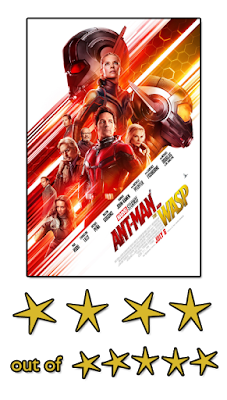 That's why they needed another bad dude.  Enter Sonny Burch (Walton Goggins) for a surprisingly long-lasting and entertaining subplot!

Overall, it was a very entertaining movie.  The first movie had a very fun scene with Thomas the Tank Engine and this time you have other pop culture references, like Hello Kitty.

I really like that Marvel is making Ant-Man a character with his own feel.  His own identity.  Marvel is able to do things in these Ant-Man movies that they're not able to do with some of their other properties.


Related Content:
• 7 Super Heroes Who Deserve Their Own Movie
• So ... who should be the next James Bond?
• The Avengers: Infinity War - reviewed.
• The Black Panther - reviewed.
• My most anticipated movies of 2018