This week I went to The Bakery Shoppe in Huntersville.

I called ahead because I didn’t know if they had cupcakes there. They said they’d just put about two dozen cupcakes out 15 minutes before, so I was in luck.

I used the GPS to get to there, but there’s a series of mini-malls in the same parking lot. There is no sign on the building – just one on the window – so the shop doesn’t jump right out at you.

Basically, if you’re going to The Bakery Shoppe – look for Showmars and then go South, across the driveway.

It’s a quaint shop inside, with some tables to sit at and a couple of large armchairs that look like a nice spot to relax if you have a smart phone to keep you entertained or some reading to do.

Although the shop spruces up their cupcakes and offers a variety for events, there were only two different flavors in the case, so it made my selection easy enough. 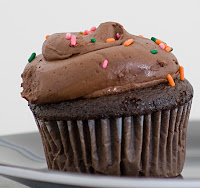 The first cupcake I tried was a chocolate cupcake, topped with chocolate frosting and some sprinkles. The frosting was spread nicely on top, but it was heavier on one side of the cupcake – so much so that once I took the wrapper off, the cupcake fell onto its side.

The cupcake was very moist and didn’t taste too bad, but when I had a bite of cupcake and frosting together, it was not very good.

It was like two different flavors of chocolate that didn’t mix together at all. The cupcake was a dark chocolate, while the frosting tasted more like the generic stuff you’d find in a grocery store. Betty Crocker’s chocolate frosting probably tasted better.

It’s too bad because the cupcake was decent, but the frosting ruined it. 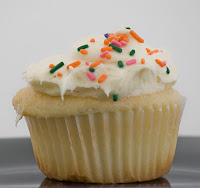 If it were a person, you’d have guessed this little cupcake was still recovering from a rough night at the bar. I didn’t care about the presentation, however, because I didn’t get it for any kind of event.

I got the cupcake to eat as a mid-morning snack. If I were a hobbit, it would have made a very nice second breakfast.

To my surprise, there was a lemon flavor in the cupcake. I’m honestly not quite sure if the lemon taste came from the cupcake or the frosting (there was no sign at the store saying what kind of cupcake it was), but either way it worked.

Unlike the chocolate cupcake, the flavors worked together to create a very appetizing treat.


The positives: the burst of lemon flavor in every bite of the white cupcake

The negatives: the chocolate cupcake really was the worst part of this cupcake experience. The different chocolate flavors didn’t mesh at all. I would've liked to have had more of a selection to choose from in the actual store as well.

Cost: $1.55 a cupcake at The Bakery Shoppe, so on the cheaper side if you're looking for a cupcake in the Charlotte area.

Posted by Batson at 9:07 AM No comments: