After the success I had in Cornelius last week, I figured, why not try and make it two for two.

When I Googled 'cupcake shops cornelius' a shop called SweetCakes showed up -- just off I-77 at Exit 21.

It's located in a shopping center that was surprisingly crowded for my mid-week trip during the middle of the day. After navigating through a bit of congested traffic, I stepped inside the shop. 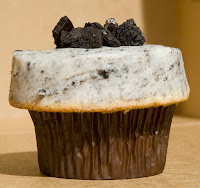 Cookies & Cream
It seems like strawberry is one flavor that every cupcake shop has. The other flavor is cookies and cream. This version -- all of the cupcakes at SweetCakes for that matter -- looked different than any other cupcakes I've run across. They have a square, block-ish type of look to the frosting. It's almost like the head of a hammer. I was worried there would be too much frosting, but that wasn't the case at all. It was balanced very nicely. 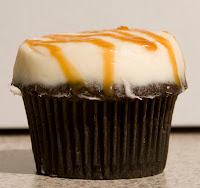 Salted Caramel
I've quickly realized over the past couple of months that I love me some salted caramel! This version was a chocolate cupcake filled with caramel. It was topped with cream cheese icing and had some caramel drizzle on top.

It didn't even need the caramel drizzle, but I'm sure glad they added it because it made the cupcake that much better. According to the SweetCakes website there was some Celtic sea salt added as well, but I didn't notice it. The caramel drizzle was more than enough to make me happy. Unlike some of the cupcakes I've had in the past, this one truly did have a caramel taste. 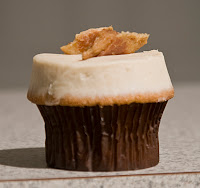 Maple & Bacon
I'd only had a bacon cupcake once before and I really enjoyed it, so I had to give this one a try.

I wanted to save the best for last, though, and I wasn't disappointed. They nailed the maple taste with the frosting. The bacon tasted like it'd been dipped into some maple syrup.

I enjoyed the Vermont Jemima cupcake from Cupcake Delirium, but this one was just as good -- more authentic actually. The butter cream icing and the crispy bacon really did taste just like Sunday Morning breakfast.

Posted by Batson at 2:24 PM No comments: