It was Redbox Tuesday for me this week. That’s the day when they update their machines with new releases. I was in the mood to watch something new, so I made a trip to Walgreen’s to check out what Redbox had to offer.

I didn’t have a particular movie in mind. I really wasn’t impressed with Tuesday’s releases, so I got one that’s been out for a while: Taken 2.

Except for the bad acting on the part of Maggie Grace, Taken wasn’t too bad. It wasn’t amazing, but it was a new concept and, really, any movie where Liam Neeson is kicking someone’s ass can’t be that bad.

As you can probably guess (or maybe you’ve read already), this movie is about the family of the men who were killed in the last movie. Now that family wants revenge.

They track Bryan Mills (Neeson), who ends up on assignment in Istanbul. He offers his ex-wife and daughter a trip there, to help them cope with a few things.

It’s not long before Mills realizes he was tracked, which results in a car chase. There’s only so many times you can see a chase on a crowded, small European street before it gets to be unoriginal. The Da Vinci Code, Skyfall, etc., etc.

The movie definitely didn’t make me want to go to Istanbul.

When people can go through the streets with hostages and nobody acts like it’s unnatural, eh – doesn’t seem like my kind of place.

In a way this one was almost more entertaining than the first, though, simply because it was more personal.

Still, there were moments that made me facepalm.

For example:
Mills has been blocked into a little back alley in Istanbul and the bad guys have a gun to his wife’s head – and he calls his daughter. Logical choice – calling his daughter – but the bad guys don’t do anything. They just let him make the call.

He tells his daughter, who is still at the hotel, to hide from the bad guys. He told her to go to his room and hide in the closet. I was thinking some kind of panic room – but no. It’s just a closet.

Anyway, at one point, after she decides it’s up to her to track him this time, he tells her to blend in – so what does she do?

She runs through the hotel very suspiciously – in a bikini top and a man’s shirt.

She steals clothes from the maid’s room (and gets noticed doing it).

She then runs out of the hotel. She takes a cab and skips out on paying it.

Yeah – blending in – she does it well.

Something kind of interesting about the movie were the antagonists. The villains were all chubby men in early 90’s jump suits. I guess it’s a nice switch from the typical assassin look that you’d find in a James Bond movie. It took me a while to get used to it though. 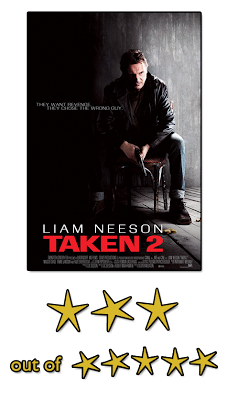 In a way, it felt like there wasn’t a third act in Taken 2. There really wasn’t any climax.

Things seemed to work out a little too perfectly for Mills and his family.  I guess you could attribute that to bad planning on the part of the thugs.

Still, it doesn’t make for the most exciting movie when nothing goes in their favor.

There really weren’t any twists or turns, which also made for a lackluster movie.