P!nk: The Truth About Love - reviewed.

It’s been four years since she came out with a new album, though it doesn’t seem like it’s been that long. Maybe it’s because she had a couple pieces of new work on her Greatest Hits….So Far!!! album just two years ago.

Like most artists these days, Pink pulls from a lot of different genres and musical styles, creating an interesting amalgam of sounds on The Truth About Love. A lot has changed since Pink last wrote new music. She and her husband, Carey Hart, put their marriage back together. Pink had a baby. Her life has changed and so has her music.

It’s still pop rock with an edge of wild and crazy. There’s less swearing, though. There’s not a lot of angst in this album. There’s not a bunch of heartbreak either. It’s every bit as enjoyable as her previous work, but it seems like Pink has less to prove on this album.

While I wish her Katy Perry-like success with her upcoming singles, I’m not sure she’ll get multiple consecutive top 40 hits with them. It’s a great album with a lot of potential chart toppers, if the timing is right, but most of the songs don’t have the teen pop sound that is seems to make up so much of top 40 music these days. It’s more in the league of fun., Adele, and Gotye than Demi Lovato, Katy Perry or One Direction.


Are We All We Are – This track is definitely a different sound for Pink – something that can be said for a lot of the music on this album. Are We All We Are reminds me of Gotye’s “Somebody That I Used to Know.” Not so much in the vocals or the lyrics, but in the way it’s a very different ensemble of musicality. The lyrics, I think, were about asking yourself if you’re all you can be. They were a little messy to be honest – perhaps trying to be too much all at once. The song seemed to be about independence, freedom, being strong, and making a statement. I guess it could be the theme song for the Occupy Wall Street movement, but even though the message of the song was about strength and independence, it came off as a too preachy and Full House for my taste.

Blow Me (One Last Kiss) – Her first single off this album is definitely the most dance-friendly track. While there are other songs on here that are full of energy, BM(OLK) is the most proudly pop and fun track one you’ll find.

Try – This track is the first of several songs that mix rock with a bit of mystical-ness (for lack of a better term). It’s kind of like a song by The Police or Annie Lennox, with an upbeat, fast tempo, but an edge of rock as well.

“Where there is desire, there is going to be a flame. Where there is a flame, someone is bound to get burned. But just because it burns doesn’t mean you’re gonna’ die. You gotta’ get up and try, try, try.”

Just Give Me A Reason – It’s an incredible song – exactly what you’d expect in a collaboration between Nate Ruess, the lead vocalist of fun., and Pink. I didn’t even know Nate Ruess’ name before I Googled it to write this review, but I knew, right off, that it was ‘the guy from fun.’ when I heard him chime in on this track. I’m hoping this one hits the radio because I think it’d do really well. Let’s hope those in charge strike while the iron is hot and fun. is popular. Once again, it's something totally different from what Pink usually delivers.

True Love – This is Pink’s version of a Carly Rae Jepsen song. That’s not a knock either. I, along with most others, was foot-tapping and secretly singing out loud to Jepsen’s famously contagious “Call Me Maybe” this summer. Lily Rose Cooper’s vocals were a nice addition to this bittersweet love song.

How Come You’re Not Here – This is quite possibly my favorite track on the entire album. My foot started tapping the moment the music started. It’s old, jazzy rock and a whole lot of fun. The background whistling is something you’d expect to hear from a group of scouts at a summer camp in the 1950s. Not only is the music fun, but so are the lyrics: “I’m like a stoner babe without my bong.” This one was so catchy that I repeated it three times before I moved to the next track. 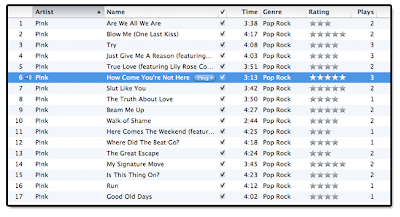 Slut Like You – Let’s start off with the fact that the main chorus in this tune is a total copycat of from Blur’s "Song 2" that featured two very memorable words: “Woo hoo.” It’s a lot of fun, though, and it’s a different sound than Pink normally delivers, so I won’t complain about the borrowing. This song really melds what you’d expect from Pink with, “Song 2,” and LMFAO’s “Party Rock Anthem.”

The Truth About Love – there was nothing wrong with this song. It’s a nice addition to the CD. Overall it was a solid effort. It didn’t blow me away though. The theme of the song was a little too similar to "True Love." Even though the two songs have different sounds, the message was pretty much the same. Hate, passion, laughter – it’s all mixes into the equation that equals out in love.

Beam Me Up – This one starts off folksy and turns into a very vulnerable track – probably the most vulnerable she has this time around. It’s a nice change of pace on the album. Pink has always had incredible vocal abilities, but unless you track down all of her performances (I’m talking the B-sides and live performances…you know, like a hardcore fan), then you may not always get to hear her range. Her vocals are captivating. The singing is really on display in this song that’s about wanting to take a trip to Heaven and reunite with a loved one.

Walk of Shame – At the start of this track, I had to do a double take and make sure my iTunes wasn’t replaying one of the previous songs. It has a similar beat to them. I liked it, overall. As you could probably surmise, it’s about the walk of shame, so the topic provides Pink with some entertaining writing material.

Here Comes The Weekend – It’s easy to tell which song Eminem lends his voice to, just by the listening to the first 10 seconds. Even though his part is actually very small and doesn’t come until ¾ of the way through the song, the entire song has an edgy element to it. It’s a nice follow up from Pink’s appearance on Eminem’s “Won’t Back Down,” from his album, Recovery. It’s a track about getting ready to party. It’s pretty generic pop stuff, but it comes off as authentic – perhaps simply because Pink is convincing in her delivery. It doesn’t seem like it’s a Disney actress/dancer/whatever singing off a page of lyrics. Eminem’s contribution isn’t groundbreaking, but he returned the favor well enough.

Where Did The Beat Go – This song really reminded me of something you'd hear off M!ssundaztood. It’s the first time Pink has delivered this kind of sound since Family Portrait. Moody, a little bit R&B, with a lining of rock. While that wasn’t my favorite time period for Pink, this song is a welcome addition on the album.

The Great Escape – Like “Beam Me Up,” this one is softer and slower. It’s mostly Pink and the piano. A little too slow though. You’re listening to it, waiting for the hook – waiting for it to pick up, and just when you think it’s there, it isn’t. When the song finally gains some momentum, it seems to end too quickly.

My Signature Move – I got vibes of Kelly Clarkson’s “I Want You” from her All I Ever Wanted album, but this song has the harder edge that fans have come to expect from Pink. It’s like a little bit of the 50s, with the backup singers, partnered with contemporary alternative pop rock, creating a successful track.

Is This Thing On? – I only listened to this one once and I can’t really remember what it was about. That’s not a negative though. This song moves right along, putting you into a happy place as it does so. I’m not sure what it was about, honestly. It’s a song about love. I know that much. It was one of those sad, but happy, but still sad, but, deep-down, happy songs.

Run – I’m not sure why this one was only included on the extended album. It’s definitely worthy of being on the main listing. Lyrically, it’s a, ‘I’ll always love you and you don’t ever need to doubt that’ kind of song. Somehow Pink, once again, takes it up another notch, delivering an entirely different kind of sound than she usually does. It’s a mystical feel-good combo. You’d almost expect to hear this in an epic movie, like Avatar, as part of a montage where the main characters are falling in love with each other.

Good Old Days – vocally awesome song. It’s light and bubbly beat (something you’d expect from Colbie Caillat) with lyrics that have Pink reflecting on her path into learning, growing and finding content and happiness. It’s a nice closing track to another very good outing for the singer who was once typecast as the white girl who sang like a black girl. 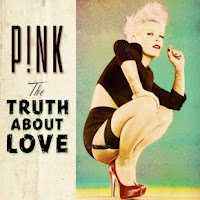 It’s been a fun journey, listening to Pink evolve the music she makes.

This album is yet another development in what I think is going to be a very long career. I don’t know which direction Pink will go in next, but I’m along for the ride.

I figured it out long ago, but in case you haven’t yet, let me let you know: Pink is a keeper. 20 years down the road, I have no doubt she’ll be continuing to make great music. I look forward to the musical development that is yet to come.

Check out my other reviews:
The Dark Knight Rises
Pink - Blow Me (One Last Kiss) single
Pro Wrestling Xperience show in Charlotte
The Avengers

Posted by Batson at 8:54 AM No comments: