P!nk is coming to Charlotte in one week. She'll be performing at the Time Warner Cable Arena next Saturday. I got my ticket last year, so I've been looking forward to this for a while.

I went cheap on this one, so I won't be getting an up close view. 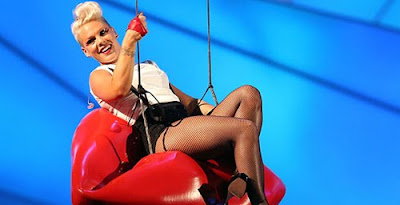 One thing P!nk has proven over the years, though, is that you never know where she'll end up during one of her performances. She may go right past me as she's flying through the air.

I'm not sure what to expect with this concert because I haven't read any of the reviews of her previous concerts on this tour. Hopefully the entire night will be a nice surprise -- from the set list to the spectacle of the show itself.

Pink is widely touted as one of the best live performers around today.

To get ready for the concert, I've been watching some of Pink's previous performances. The concert is seven days away, so let's take a look back at seven of Pink's best performances. 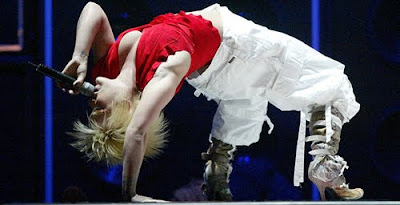 Pink in her wild and crazy days. To be honest, the vocals aren't amazing and the there was a raunchy moment -- involving a man's face being in close proximity to a vry private part of Pink's anatomy -- that probably gave the show's producers a heart attack for a quick moment.

However, even back then, Pink was still doing things other singers weren't. She showed that she was an athletic, physical performer, back-flipping in heels on a giant spinning record and falling several feet off a giant stereo set into the arms of her backup dancers.

It may not be her best performance, but, overall, it was fun.
Watch it on YouTube 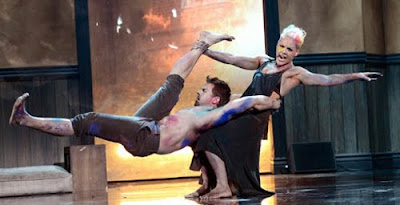 Although this isn't my favorite song off her latest album, The Truth About Love, Pink's performance of "Try" at the American Music Awards last year was pretty impressive.

It was like performance art set to a pop song. It's just that one of the performers was also singing the song. That doesn't happen too often.
Watch it on YouTube 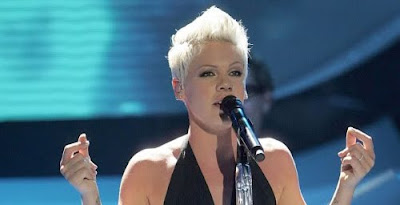 I may be biased on this one because "Who Knew" is probably my all-time favorite song that Pink has released. Since she wrote it about friends who died from drug overdoses, Pink always delivers an emotional performance.

It always seems very raw and heart-felt. This performance was filmed for the 2007 version of Idol Gives Back, a but wasn't aired. It was aired at a later date.

My only complaint is that, since it was on American Idol, it would've been kind of interesting to have heard the comments from the Idol judges.
Watch it on YouTube 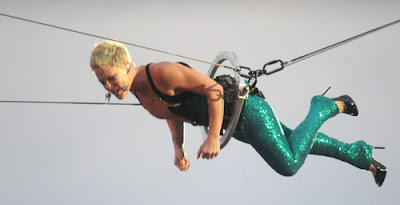 This is just a fun performance! It makes you want to fly around through the air too! I'm surprised that Six Flags or some other theme park hasn't added this flying belt harness to their list of rides.

Pink is having a blast in this performance. You can tell that she's confident in what she was doing and that she enjoyed hovering above the masses. Who wouldn't? It's probably the closest thing anyone could get to being a super hero.
Watch it on YouTube 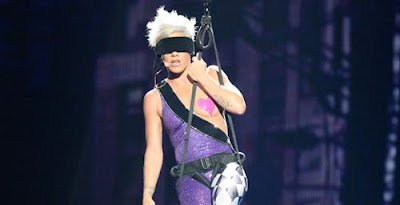 Although taking to the skies is now somewhat of a staple for a performance from Pink, this was the first time she did it in a televised performance.

She was lifted to a giant swing-like contraption and delivered an acrobatic show along with a killer rendition of "Sober." If you thought that was awesome, just wait until you check out the number one pick.
Watch it online 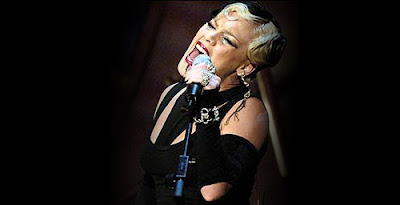 If you think Pink's theatrics and high-wire act are the only things she's good at, you're highly mistaken. She can be just as impressive with a stool, a microphone and a guitar.

Fresh off the release of her third alubm, Try This, Pink performed a stripped down rendition of her hit, "Trouble." I was blown away by this performance. I'd always been impressed by Pink before, but this performance took it to a new level.

She can write a damn good pop song, but she can also sing with the best of them. Jimmy Kimmel's comments after the performance summed it up perfectly: "It's always such a pleasant surprise when people can ac­tu­al­ly sing."
Watch it on YouTube 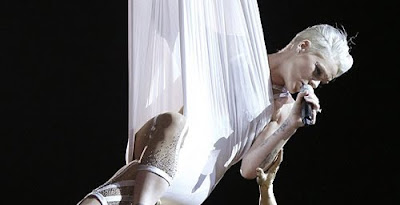 I'm not sure Pink will ever top this performance. This was Pink's moment. The best part is that it probably wasn't meant to be. She didn't have a huge hit at this point ("So What" was already a year and a half old) and she performed a song that wasn't even a single. Part of the appeal at the time was that nobody expected Pink to give that kind of performance.

While other performers did well that night, how could they compete with Pink? She was hanging in the air, upside down, and still singing better than anyone else. The choreography, the lighting, the singing, and the crowd reaction at the end combined to make an incredible performance. She wasn't just a singer -- she was an artist.
Watch it on YouTube


I don't want to get my hopes up, but maybe Pink will be soaring to the top of the Time Warner in seven days.