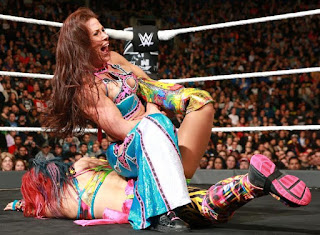 It was announced recently that, after her outstanding performance against Asuka at Takeover: Toronto in NXT, Mickie James has signed a new, 3-year contract with WWE and will be assigned to the Smackdown brand.

Mickie is one talent who has only gotten better with age. She was a good wrestler when she first signed a developmental deal with WWE in 2003, but since then she's refined her skills, expanded her move set and truly lives in the moment during her matches.

As a result, her matches have psychology and lack the rehearsed feeling that sometimes even Sasha Banks and Charlotte end up having.

I'm very happy, as a longtime Mickie fan, that she's getting a second shot in WWE and will, hopefully, end her tenure on a better note. I see a Hall of Fame induction in her future.

Meanwhile, there's another former Diva who I hope will attract some interest from WWE: Melina. 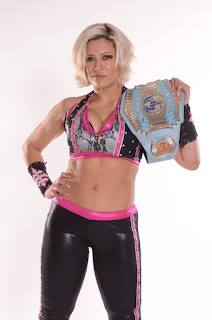 For several years after being released back in August of 2011, Melina kept a relatively low profile, making occasional appearances at autograph signings or fan expos. 2016 was the year that she returned to the ring, capturing two championship titles --- one for a Los Angeles-based promotion.

Apparently she and John Morrison (now 'Mundo' in Lucha Underground) broke up within the last year or so. I'm assuming that's why she's stepping back into the ring. John Morrison has kept a steady schedule, whether it be with wrestling or with appearing in small-scale movies. Now that they've split, she's got to support herself.

She doesn't have a reality show deal with E! like Kelly Kelly, she didn't sign onto a deal with Vivid like Sunny, and the probability of her making it big as an actress in Hollywood just isn't good.

With the exception of The Rock and, to a lesser extent, Batista, there aren't too many people who have had luck getting anything other than bit parts in movies. Steve Austin has made a second career out of making straight-to-DVD movies and hosting reality competitions, but Melina isn't Steve Austin.

That means stepping back into the ring to earn a paycheck. I have no idea what her financial situation is. This is all purely speculation on my part, but it makes sense. 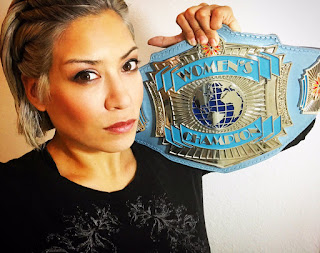 Now that Melina is back in the ring, she's become more active on her social media accounts as well. She posted a video to her YouTube channel earlier this December about her feelings on Mickie James.

Apparently some fans had asked her a question (probably since there was rumored heat from their OVW days). They obviously mended any issues they had.

Melina also spoke about Mickie in a second video that was posted on the Southside Wrestling YouTube page.

Melina spoke about how fans still talk to her about the matches she and Mickie had while they were both in WWE.

If you're not familiar with all of their work, I'd recommend doing some YouTube searching (look for a series of matches on Heat in 2008).

She mentioned the idea that if they had such good chemistry at the time, then they'd have even greater matches now. That idea got me thinking: she's probably right. Surely a few matches with a familiar ring mate would end up in some rave reviews. 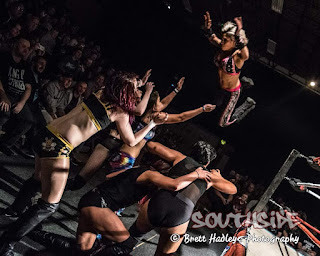 I haven't seen any of Melina's return matches, but Mickie James really grew as a performer during her run in TNA after she was released from WWE. Mickie had very good matches with the likes of Gail Kim, ODB, Madison Rayne, Winter and Angelina Love.

If those matches are any indication of what she can do with top level talents, then I like the idea of Mickie James vs. Melina -- revisited.

WWE could make that happen by signing Melina to another contract as well. Unfortunately, I don't have a lot of faith that this will happen since WWE has a history of not making obvious and easy decisions that lead to a good TV product.

Knowing WWE, if they were to sign Melina, she'd probably wind up on Raw as Nia Jax's jobber and never even cross paths with Mickie James. 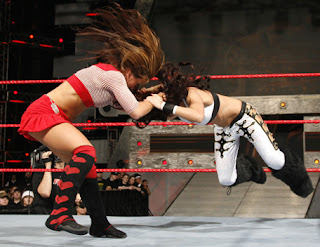 I remember WWE's awful women's division during the initial brand split. The talent was there. Beth Phoenix, Melina, Jillian, Mickie, Trinity, Victoria and others all on the same roster but rarely used together or in a meaningful way.

That's probably what would happen this time around too. Still, I have hope.

WWE signing Curt Hawkins, using The Headbangers, bringing in the Spirit Squad, and having interest in Shelton Benjamin gives me hope that they'd give Melina a second run with the company as well.

Ideally she, too, would go to Smackdown and Raw could have the likes of Asuka, Ember Moon, Peyton Royce and Billie Kay when they are called up. 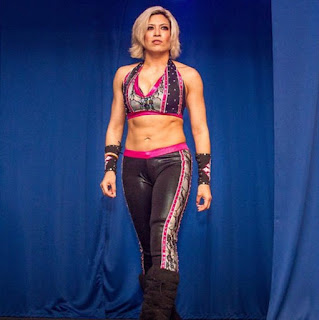 Even if they were just matches on Superstars or Main Event (or whatever secondary TV show WWE has these days), Melina vs. Mickie James would be a fun feud to update. They've both still got it in them.

I hope they both get the chance to show it.


Related Content:
• 20 talents that WWE needs to keep if they buy TNA
• Nia Jax and Layla El --- the same person?
• RIP Chyna
• My Wrestlemania vs. The Real Wrestlemania