My most anticipated movies of 2017

2016 was an odd year. I was really looking forward to Star Trek: Beyond and X-Men: Apocalypse. Those two (along with Batman v. Superman and Civil War) were the movies I was looking most forward to watching.

However, Star Trek and X-Men were kind of letdowns. Meanwhile, I wasn't even planning to watch Rogue One and I ended up going to see it twice.

Here are the movies I'm looking most forward to in 2017, so we'll see if they end up living up to my expectations. 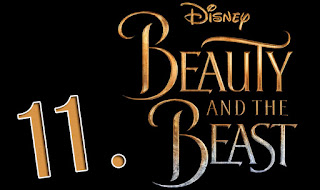 Disney is apparently doing a series of live action movies to go along with their fairy tales. Instead of making new characters and stories, they're going the live action route. That's not necessarily a bad thing. Maleficent was a good movie. I never watched 2016's Cinderella.

The cast certainly has me excited. Emma Watson as Belle, Luke Evans as Gaston, Ian McKellon as Cogsworth, Emma Thompson as Mrs. Potts and Ewan McGregor as Lumiere all seem like good choices.

The name Dan Stevens certainly didn't ring a bell to me, but he's the man who will play the part of the Beast.

Upon some IMDB.com clicking, I saw that he was Sir Lancelot in Night at the Museum 3. That was a fun movie. I remember Lancelot. Stevens did a decent job there, so hopefully he can do the same in this movie.

Releasing short, little trailers is smart as it leaves you wanting more (because they really haven't given you too much yet). 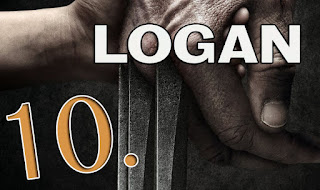 The final Wolverine movie. It has to be epic, right? I mean, it really has to be. Sure, they'll probably recreate Wolverine down the road with another actor, but it won't be Hugh Jackman.

I'd heard there's a female Wolverine in the comics these days. I guess I'd like that better than a male actor trying to replace Hugh Jackman because that's a silly idea.

I saw the trailer for this movie when I went to see Rogue One. To be honest, I'm not sure how I feel about it. It's kind of a question mark because the stand-alone Wolverine movies have never been major blockbusters. While Jackman always does well in his performance, it seems the script is lacking or the villains aren't what they should be.

Logan kind of looks like a Clint Eastwood-style movie. It's the ending to a saga and appears to be a great deal of baggage for Wolverine to get through. Using "Hurt" by Johnny Cash in the trailer looks seems appropriate. While I'm not excited about this movie (due to being let down by the X-Men franchise a few times before), I am intrigued by it.

It seems like this movie may take a different direction than most super hero movies and I'm kind of excited by that. I'm just not fully invested because I don't want to be disappointed. Hopefully they can prove me wrong and blow way past my expectations. 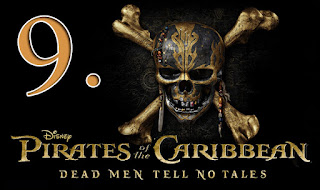 Kind of like with X-Men, the Pirates of the Caribbean movies have great moments and WTF moments. There are instances where they went in the wrong direction, but I keep going back, hoping they'll reel themselves in and get back on a winning track.

No matter what gripes I have with each of the movies, each one always has a great action sequence and some good one-liners by Capt. Jack Sparrow. Johnny Depp really does well with that character.

Pirates has become an interesting mix of fantasy, fairy tale and history. Pirates, mermaids, cursed skeleton shipmates, fountains of youth, and sword-fighting? No other movie franchise offers that kind of strange mix.

You'd think it wouldn't work, but somehow it kind of does. Sometimes they go too far out there (like with the giant sea monster), but if the moviemakers can reel some of their ideas back into the box this time around, it'll be a nice closing to this series of movies. Or maybe a fresh start to the next movies in the series?

Either way, I'm anticipating it and am hoping it's worth the wait. 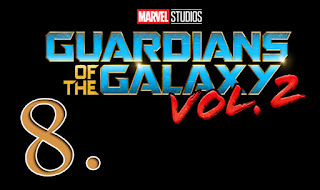 Eh. I'm hoping this is good, but, based on the trailer I saw so far, it seems like this sequel may be a 'try too hard' attempt at a sequel rather than capturing the magic that was in the first movie.

I hate it when that happens.

The soundtrack used in the first trailer doesn't leave me impressed either. The soundtrack was such a fun part of the first movie that they really need to make the second one just as good.

Hopefully they just foolishly left the good parts of the movie out of the first trailer. 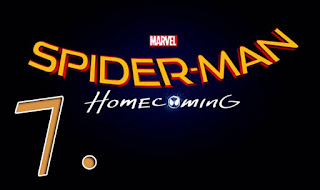 I was NOT happy about this movie. First of all, I wasn't happy that they were making The Amazing Spider-Man so soon after Tobey McGuire left.

Then, somehow, they ended up with an updated, very good Spider-Man in Andrew Garfield and (I'm assuming) because of Fox/Marvel negotiations, they end up casting someone entirely new.

I'll admit, the trailer looks good. Tom Holland was fun to watch in Captain America: Civil War and he seems to have nailed that sarcastic sense of humor that Spider-Man has.

Michael Keaton as Vulture (he just likes his wings, doesn't he?) seems like a solid choice. Employing Robert Downey Jr. to show up as Iron Man and give the franchise a good start was smart. But I'm a fan of continuity. I don't see the reasoning behind booting Andrew Garfield when they could've kept him and joined the previous Spider-Man movies with the current Marvel movies.

They had to start over fresh again. I'm just hoping -- since Holland is so young -- that this will lead to a series of consistent Spider-Man movies so that they can tell some of the better stories that are out there in comic book and TV form.

Each time they recast and reboot, they have to start with a launching pad movie, which wastes a lot of time since most of the world knows Spider-Man's backstory already.

It's like always getting the appetizers but never getting to the main course or the third part of the trilogy. Two steps forward and one steps back, it seems. Maybe they'll get it right this time. 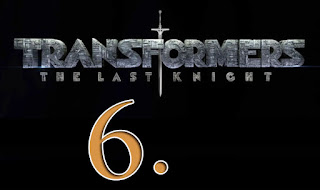 Oh, Transformers. Speaking of franchises that toys with your heart. Michael Bay does like to go 'Boom! Boom! Boom!' with his movies. Lots of explosions. Lots of destruction. Go big or go home.

After all, this is a movie about giant, mechanical-changing aliens.

Overall, the Transformers franchise has been good. It's been a big-screen spectacle anyway. It's always visual and has fast-paced action sequences. It's creative (Transformers 4 had Dinosaur transformers! How cool was that?!). While the continuity has been damaged a bit due to changing lead male characters from Shia LaBeouf to Mark Wahlberg, the main attractions in the movie are the Transformers. 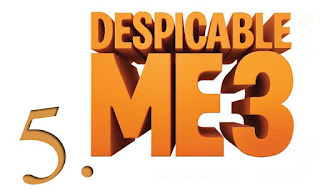 This wasn't on my list originally but after seeing the trailer for Despicable Me 3, I was hooked. The 80's, balding, bubble gum-chewing villain?

He's someone who could only appear in a movie like Despicable Me 3.

The thing I like about these movies is that they are creative in terms of their action sequences (and there's a little more leeway since it's not real), they have comedy (for kids and adults) and they've got the whole spy thing going as well.

That's a fun little mix. Then you add in the minions and it's even better. 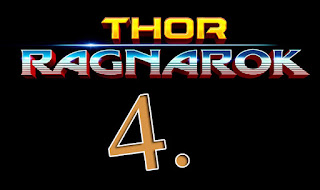 With Thor, Loki and rumored appearances by The Hulk and Dr. Strange, how can it not be?!

All of those combinations and I haven't even mentioned Anthony Hopkins yet. He's always great as Odin.

I expect big things from this Thor movie and I really don't think I'm going to be disappointed. 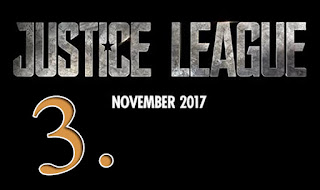 I'm just a little more excited for Justice League than I am for Thor: Ragnarok because of the intrigue factor. I know Thor. I know Marvel. I know that'll be good.

I don't know what the Justice League movie will be like, but the bits that I've seen so far seem like it's going to be really, really good. Dark, of course, since DC seems to take more of a real world approach than Marvel does. But it does look good.

Superman, Batman, Wonder Woman, Cyborg, The Flash and Aquaman? Sounds awesome. Plus, Lex Luthor, Lois Lane, Alfred and who knows what other cameos or introductions we'll get.

Jason Momoa as Aquaman seems like such an awesome choice, too! He will make Aquaman cool instead of just being a punchline (and rightfully so) on episodes of The Big Bang Theory.

Since the Aquaman movie won't be released until 2018, this is the first chance we'll get to see him. It'll be another chance to see Superman, Batman and Wonder Woman share the screen too. 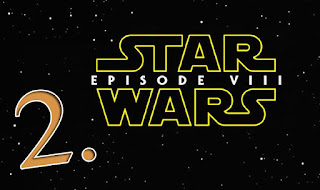 I've been on a big Star Wars kick lately. I broke down and purchased the complete saga (even the prequels with Jar Jar Binks) and Episode VII on DVD recently.

I'd seen the originals on repeats on the USA Network in the 90's, so, when you think about it: I'd never really seen them before.

With the commercials breaks and me being so young, my memory was fuzzy on a lot of the actual Star Wars events.

Anyway, after watching the entire saga (including Rogue One now), I'm extremely anxious too see what happens in the next chapter. Rae has got to be Luke's daughter, right? I also want to learn more about Supreme Leader Snoke. Who is he? How did he get to his position?

Will we see Yoda (in memory form)? Or maybe Han Solo? How about Obi-Wan? I feel like he could make a cameo appearance at some point. Maybe even a Darth Vader cameo in some kind of flashback scene?

I'm dying to see what happens with all the characters, new and old. 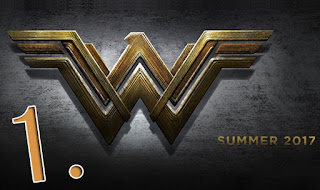 The number one movie I'm looking forward to paying money to see in 2017 is definitely Wonder Woman. It was close -- between Star Wars, Thor, Justice League and Wonder Woman, but this one seems like it'll be a safe bet.

So far DC has handled Wonder Woman extremely well. They could have a cash cow on their hands in terms of merchandising if this movie succeeds.

All the little girls and young women would have a female super hero to be a fan of. Harley Quinn was awesome in Suicide Squad and Black Widow is a mainstay in Marvel's universe, but neither have been given a lead in their own movie.

Warner Brothers and DC seem to be positioning Gal Gadot and Wonder Woman as a long-term moneymaker.

Based on the trailers, I think they may be right. They seem to be doing right by the character, giving her an interesting backstory and good writing to boot. There was a great mix of comedy, action and drama in the trailers. That's Marvel's specialty. That mix has proven to be a winning combination for them, so it makes sense that DC would try to get on board there.

Posted by Batson at 8:54 PM No comments: