Something that's been happening in recent years is casting black actors in the roles of comic book characters who were typically white.

Of course, it's something that goes back to timing and culture and society. When comic books were published several decades ago, it was during a time when race was still a very sensitive subject.

Race may be a sensitive topic these days too, but in the 1940's and 1950's, black people still didn't have the rights they do today. I wasn't alive at the time, but I'd imagine it was even more tense than in today's current climate.

It creates an interesting dilemma for Marvel and DC movie and TV-makers.

Do they change the race of beloved characters? Do they create new superheroes who are black (and Asian and LGBT, etc, etc?) to satisfy their diverse readers?

Do they elevate their lesser-known black characters to more prominent roles (like Luke Cage and Black Panther)?

Or do they stick to the original portrayals and ethnicities of their characters? 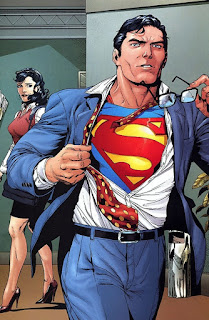 Personally, I'm not a fan of changing the race of certain characters just to change the race of them --- just to add diversity to the show.

I'd much rather the show creators develop a new character with an original story.

Superman will always look like Superman.  He's never going to be a blonde-haired white man and he'll never be a bald black man.  He'll never be a redheaded woman either.

He'll always be a dark haired white man who wears glasses when he's not flying around in a red cape.

I'd much rather see a new character developed rather than trying to change Superman so he's 'diverse.'

Storm, from the X-Men, will never and should never be a white woman with brown hair.  She's a black woman from Egypt and her hair is white.  That's just how it is.

I'm not a fan of Marvel making the new Thor a female. 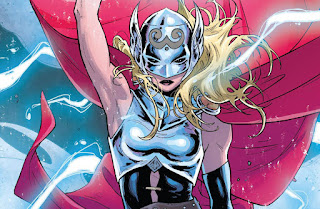 Why do they need a new Thor?  Why not give her a different name?

Create her own identity.

Have her take over the duties of defending Asgard, but give her different costuming, let her keep her name, etc.  Piggybacking on the Thor popularity won't work.  It's not Thor.  It's a female Thor.  That's not the character fans came to enjoy.

I have the same feeling with remakes of shows -- like MacGyver and Hawaii 5.0.  Instead of trying to recreate what once was, why not come up with a new concept?

Those in charge of the comic book movies and the TV shows tried several options a few different times in the past few years when it comes to creating a diverse cast and it's clear that there isn't one right answer.

Here are some of their decisions that worked and some that didn't. 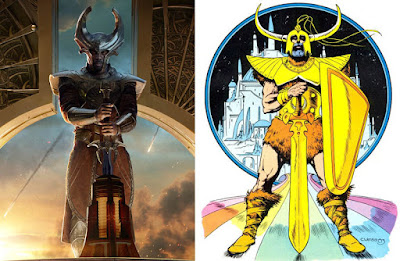 This casting choice worked. It seems odd, I suppose, that a black man would be the gatekeeper for a land of Nordic Gods, but I didn't even think twice about it when I saw the first two Thor movies. It wasn't until I read a little more about the history of Thor (after the first two movies were released) that I realized it may not have made the most sense.

Still, Idris Elba just makes it work. The movie version of Asgard seems to have diversity in it, so it makes sense there. This was a good casting decision.


Michael B. Jordan as The Human Torch 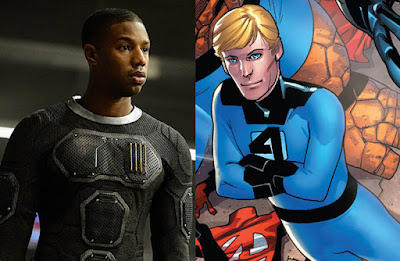 This was one of the more controversial casting choices in the past few years. Michael B. Jordan was cast as The Fantastic Four's Human Torch and people kind of scratched their heads, wondering what the backstory was.

Then the movie came out and didn't really offer a backstory.  It seems as though he and sister Sue Storm were adopted brother and sister, but in this day and age, there are mixed marriages between white and black people, so there are people with all kinds of racial backgrounds -- mixtures of all kinds.

That's not really unusual.  I don't think anyone really had a problem with updating the script.  What was odd about 2015's Fantastic Four is that it offered zero explanation as to what that backstory was.

The cast was very sensitive about it (too sensitive, in my opinion) when they were doing interviews, too.  In one instance, there was an awkward interview with a couple of radio hosts and the cast seemed defensive about the topic (probably because they were asked about it several times).

If Michael B. Jordan were The Thing or Mr. Fantastic, I think this would've worked out fine.  Or even casting Sue Storm as black.  Or keeping Michael B. Jordan and Kate Mara in the roles they were cast in -- but explaining their relationship better.  That all would've been fine -- and may have resulted in a more successful movie.

I think this one was a miss.  Bad casting decision here. 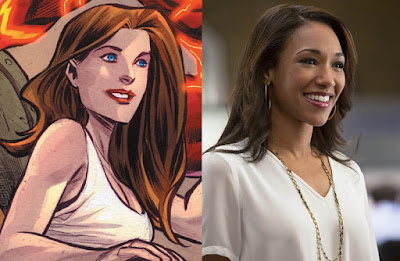 This casting decision seems to work.  Candice Patton isn't the best actress of all time (though, after making it through season 2, I'm wondering if the content just doesn't have enough substance for her abilities).

She and Grant Gustin have a nice chemistry that is evidenced in the pilot.  There was no real need to explain any reason for the casting change since there was no brother-sister relationship.  However, The Flash still gives a backstory.  Iris and Barry grow up together in this version (after Barry's mom gets killed and his dad goes to jail).  Yet their Barry and Iris' relationship doesn't seem unnatural or unusual at all.

This was a good casting decision. 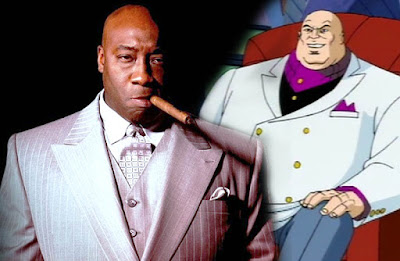 Michael Clarke Duncan is a big dude.  He's bald.  He's got a physical presence to him.  Only difference between him and the comic book / animated version of Spider-Man and Daredevil's Kingpin is that he's black (and not quite as large as Kingpin is depicted sometimes).

There weren't big-name, musclebound guys who could take a role like that at the time.  The studios could've gone with an unknown actor, but even today ... there's not many actors who would make a good Kingpin.  Netflix's decision in going with Vincent D'Onofrio was genius.  He's amazing at the role as well. 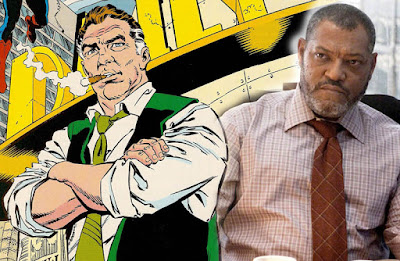 No.  I'll get this out of the way right away: this was a bad casting decision.  Number one, he's an awful Perry White.  Laurence Fishburne isn't a name that added to the movie.  He didn't do a stellar acting job.  In my opinion, it was the opposite.  He didn't seem to have a good grasp of the Perry White character.

I saw this as a 'Oh, shoot, we need a black guy in this movie' decision because surely they could've found a better actor with better energy and screen presence than him.

I know a lot of people weren't thrilled when Fishburne came onto C.S.I. to somewhat replace Gil Grissom, but I thought he was okay.  In the end, he didn't really help or hurt that show.  He was just there.  Fishburne was great in Akeelah and The Bee, but Perry White just isn't the character for him.

I'd rather keep him as Perry White throughout DC's upcoming movies -- but I hope he doesn't have a large part in any of them.  He doesn't add anything to the role or the movies. 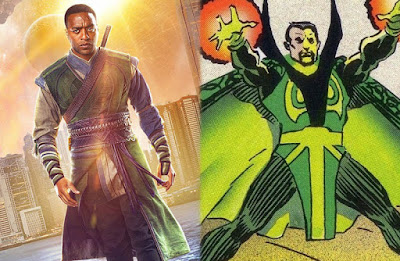 The casting decision of the Dr. Strange movie that got everyone talking was Tilda Swinton as The Ancient One.  There were claims of Hollywood whitewashing the movie.  Yet the casting decision nobody talked about was Chiwetel Ejiofor being cast as Mordo.

Mordo was a white man of European descent, yet in the movie he was a black man with a sword.  I didn't have a problem with this decision since I wasn't an avid Dr. Strange fan and I didn't know most of the characters outside of Dr. Strange, himself.

Chiwetel was great in Salt and, once again, did a good job in Dr. Strange.  I'd classify this as a good casting decision. 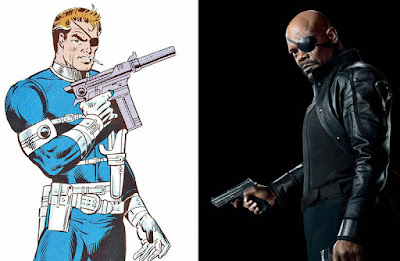 It's hard to categorize this as a bad decision given how immensely successful the Marvel movies have been.  Then again, is that due to Samuel L. Jackson or Robert Downey Jr.?

I don't think Samuel L. Jackson was a bad Nick Fury.  It worked.  He did well in the role.  So let's chalk it up to a good casting decision.

I just think Jackson is very overrated as an actor.  He's kind of like Adam Sandler or Pauly Shore.  Same delivery and facial expressions, no matter what role he's in.

Posted by Batson at 9:25 AM No comments: