A lot of people have mixed opinions on the Transformers movies and Michael Bay's big 'boom/bang' style. I don't mind it. 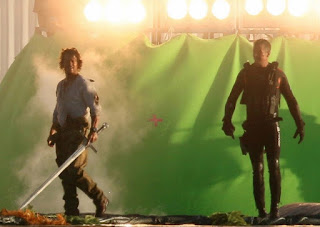 The movies don't measure up to the ensemble Marvel movies (like Captain America 3 or The Avengers movies), but they are entertaining and tell a decent story.

If it weren't for the length (that almost makes your butt numb from sitting for so long ... 3 hours including the previews), I wouldn't have much negative to say about it.

This movie included more of what fans of the previous 4 movies liked, plus some new elements. This is the only movie I can remember that had one Transformer assisting in the age of King Arthur and another battling Nazi soldiers in World War II. This movie went further into the Transformers backstory and why there are so many of them who end up on Earth.

There were a couple of quick mentions of Sam Witwicky, so I was happy to see that. I do secretly hope for a Witwicky return to the Transformers franchise, but I realize that's doubtful given how crazy Shia LaBeouf has become.

Josh Duhamel returned in his role as Lt. Col. Lennox (I did have to Google his character's name since it was never really stressed in the first 3 Transformer movies). It was good to see that. Though I may be biased since he's a Midwestern dude, just like me. 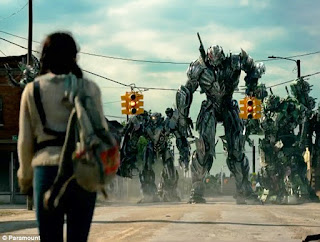 Speaking of the Midwest, the badlands of South Dakota were mentioned and were used for a couple of major scenes in the movie.

They did OK with the portrayal for a while, but then in this apparently abandoned town there's some multi-level building with a robot that looks like it's out of a Willy Wonka or Harry Potter movie. There aren't any buildings like that in South Dakota, much less in abandoned towns.

But it's a movie, so what are you going to do?

I'm not sue the little girl was really needed.  She didn't necessarily hurt the movie, but by the end of the movie you realize that she didn't add much to the movie considering how much time was spent on developing her character.

Sir Anthony Hopkins was great, as usual.  His bits made the movie very entertaining. 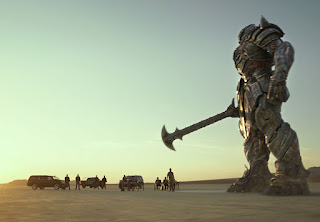 Megatron got a pretty bad-ass makeover in this movie.  It made me wonder if this is how he should've looked for the entire franchise.

Mark Wahlberg was alright, but I think his acting left a little to be desired. His attempts at humor at certain points just didn't really leave me laughing. Or chuckling.

It was more of a 'Huh. That was kind of funny' reaction than anything else. The bit in the junkyard, for example.

I realize that the new normal is living in a land of robot aliens, but his interactions with the baby Dinobots seemed a little bit silly.  Considering there were some rather lame attempts at humor, I was surprised at the adult language that was used in the Transformers movie.

I'm an adult. Doesn't really bother me. But seeing as how this seemed like more of a family friendly or PG movie franchise, it was a little bit strange to hear so many, 'Shit,' 'Damn,' and 'Bitch' words used. 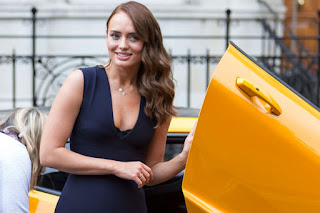 Laura Haddock (otherwise known as an Angelina Jolie look-alike) made for some nice eye candy in the movie, but she also did a decent job in her acting.  She provided some humor and handled the more physical parts of the role well enough.

She had a rather unnecessary wardrobe change at one (or two?) point in the movie.  In a real-life situation where time is of the essence, who doesn't go change into a new outfit?  Maybe they had an advertiser they needed to appease?

Little things like that prevented this movie from being an epic, all-time great superhero movie.

Of course, Haddock was a romantic interest for Mr. Wahlberg.  Gotta have a little romance in there too, I guess. 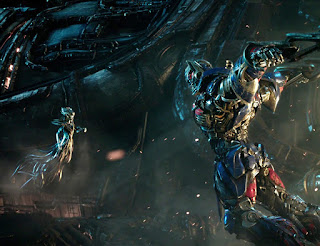 This was the first Transformers movie I remember with an extended period of time spent in the ocean. That was cool to see.  There were some scenes in space as well.

Optimus Prime's mission to find his makers was continued in this movie.  I don't know exactly what happened there, in all honesty.  There was an evil Transformers woman.

There were some good Knights.  The Decepticons and Optimus were each trying to find a certain weapon.  It was all a little confusing, so I'm not sure how great the story was.

Just as it was with the other Transformer movies, you have to go back and watch it again a couple of times before being able to appreciate the twist and the turns and how involved the storytelling is. 2 and a half hours fits a lot of content into a movie. 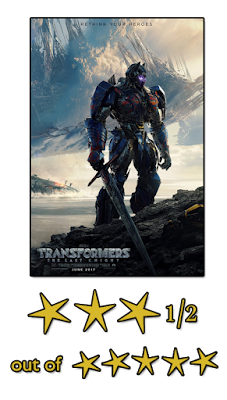 Overall, it was good.  I thought it was interesting and I'm looking forward to the next installment.

I'm not sure how many adventures they can come up with before the franchise jumps the shark.

I haven't read the box office results, honestly, but it was in a tough spot -- squeezed between Wonder Woman and the upcoming Spider-Man: Homecoming movie.

I'm assuming both of them will do better than The Transformers: The Last Knight.

But hopefully they can get another movie or two out of the franchise before it ends.  There's still a lot to be told regarding the origins of the Transformers and their connection to Earth.