So who is excited for the new Star Trek movie?

It seems like it's been ages since the Star Trek brand was reworked on the big screen. Star Trek, starring Chris Pine, Zachary Quinto and Zoe Saldana, was released in 2009.

I guess it will be about five years old by the time the sequel goes to theatres.

The movie poster looks akin to The Dark Knight Rises, but doesn't really give many clues as to what will happen in the film. 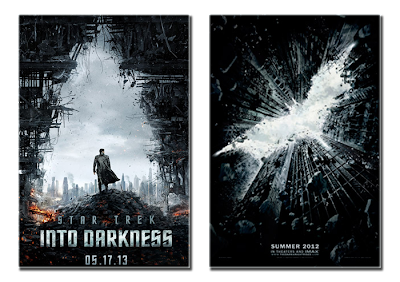 The new teaser trailer for Star Trek: Into Darkness that was just released gives us a little more information.

I've always been more of a Star Wars fan, but the trailer looks cool. It seems J.J. Abrams is going all out with this new threat that the crew of the Enterprise will face. In the teaser, there's a shot of what appears to be the Enterprise, crashing down into the ocean.

I'm not sure what other plots will be brought into the film, but it looks like the overall plot will be the threat of someone destroying Earth. The responsibility to save the planet will, of course, lie on the shoulder's of Captain Kirk, Spock and company. The trailer didn't feature much of Spock though, which seemed odd. I'm assuming he'll play as big a role as he did last time around, but I guess we'll see when the movie is released.

I'm trying not to keep too up-to-date with the plot and the cast of the movie, so I'm anxious to find out who this new villain is and why he, all by himself, is such a threat to the planet.

All in all, I guess it's a successful trailer. It caught my interest and, most importantly, the entire plot wasn't revealed. I hate it when movie previews leave me with no reason to watch the actual movie.

What do you think? Disappointed or excited? Take a look at the trailer and leave a comment.

Posted by Batson at 5:18 PM No comments: