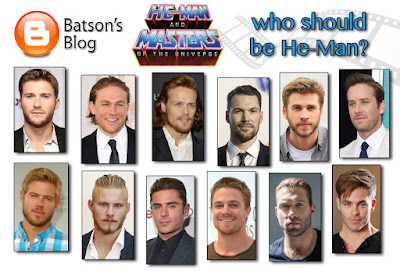 Alright, after blogging about who should NOT be He-Man yesterday, I decided to finally go through a list of possible contenders.

In some cases all you'd need is blonde hair instead of brown hair.  Maybe some hair extensions, too.

First, a few more who we can rule out:


Before we talk about possibilities, we have to talk about which version of He-Man we're talking about.

There's the Filmation version, which obviously needs to be updated for any kind of movie that happens.  The color scheme can be mostly the same. 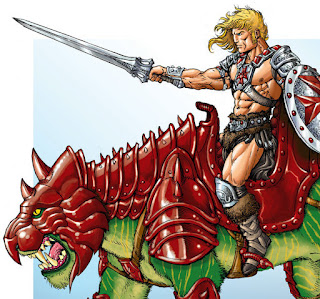 The armor can be a mix between Lord of the Rings and Game of Thrones.  Some furs.  Some armor.  It'll look pretty cool if any of the fan art pictured here is any indication.

Look at how awesome that Battle Cat armor looks, too!

The hair needs to be shaggy.  Definitely can't be short or a mullet like the 1980s movie.  Blonde or sandy blonde is fine.  I don't think that makes a difference.

The sword should be the classic representation from the Filmation series.  There is no changing that!

Alright, let's move onto some possibilities (though some are very unrealistic ...) 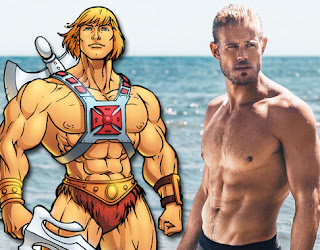 Who? He's a lesser known actor who probably would've had a better chance several years ago. He was on Melissa & Joey, the 90210 reboot and had guest appearances on CSI, NCIS, etc.

He's got the hair color and the size, but his acting ability would probably make this less of a big box office movie and more of a made-for-TV movie.

Better than other options due to the look, but not ideal due to his age and the fact that he's not that well-known. 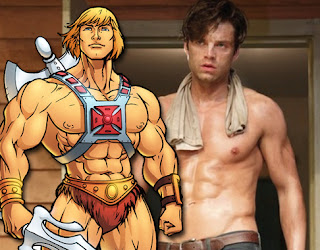 Sebastian Stan is a maybe not one who comes to mind when thinking of superheroes.  Probably because Chris Evans is the star of the franchise Stan is part of (Captain America).

But Stan has been in almost as many Marvel movies as Evans has.

Stan has the acting ability and the look.  With the long hair he sports as The Winter Soldier, I think you could easily throw some blonde in there and give him an updated He-Man look.  He can act and do stunts and is a familiar face, even if he's not the most familiar name yet.

Not a bad choice at all. 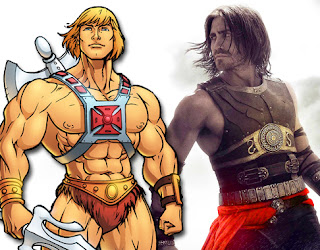 This could potentially work. I really enjoyed Prince of Persia. He looked the part there. Throw in a little blonde dye for his hair and it could work.

He's known for more dramatic movies. I can't remember the last movie he was in that was a commercial success.

I'd guess that his days of trying for 'big box office' movies are over. He'd give the role some credibility, that's for sure.

Not sure it's the right fit though. 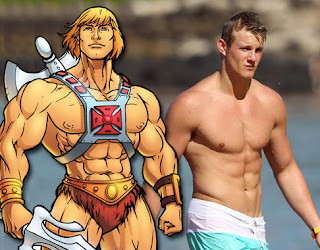 He's not a name I was familiar with, but I'm familiar with some of his work. He was in The Hunger Games and starred in multiple episodes of the Vikings series.

He was in Race to Witch Mountain (too bad it wasn't after The Rock really took off as a Hollywood heavy hitter), Grown Ups 2 (are there still Adam Sandler fans out there?) and a couple of other movies.

I don't think he's had what most would consider a breakout role yet, so maybe this could be it. Maybe he could take this role and run with it.

Considering there are so many actors that wouldn't work at all --- Tom Cruise, Leonardo Dicaprio, Hugh Jackman, Ryan Reynolds, etc., etc. --- I'd at least consider this guy.

He's got a look that would work and could potentially do a decent job with the material. 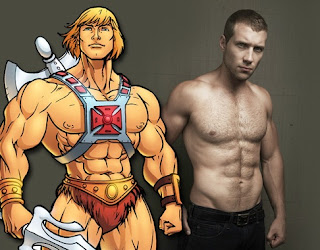 I wasn't too familiar with Jai Courtney until I looked at his IMDB page and realized I'd seen a few movies with him. He was Captain Boomerang in Suicide Squad and he was Eric in the Divergent movies. He was also in Jack Reacher and A Good Day to Die Hard.

I think his hopes at becoming a big box office draw are dwindling.

He's still getting lots of work, but it's for smaller roles or movies it seems.

He wouldn't be a bad choice, but I'm hoping for someone with: 1) a higher profile or 2) more acting ability. 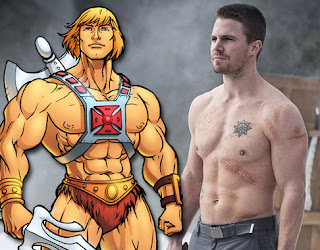 I don't know that Amell can pull off the He-Man character. He's better as the somewhat brooding Green Arrow.

But if it has to be someone with a bigger name, I'd prefer Amell to Channing Tatum or Chris Pratt or Chris Evans or Bradley Cooper or Ryan Gosling.

Some of those guys just don't seem like they'd make a good He-Man / Prince Adam.

Amell wouldn't be my first choice, but he's probably middle of the list --- if we're talking known actors.

An unknown may be the best option. 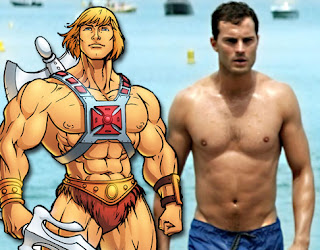 I'm not too familiar with him. Sometimes I'll run across his photo on a Twitter feed and think, 'Oh, it's Superman!' It's not. Although he resembles Henry Cavill, his star power isn't quite at the same level.

Most women probably know him from the Fifty Shades trilogy. I've never seen the movies, so I can't attest to his acting.

He was in Once Upon a Time, but I've only seen a couple of episodes of that before I had to turn it off.

He will be in Robin Hood --- though that may end up being a Redbox release rather than a movie theater release.

He's got several projects coming up, so his star appears to be rising.

I'm not sure about the acting, but, facially, he has the look.

I could see him hoisting a sword above his head and bellowing, "By the power of Greyskull ... " 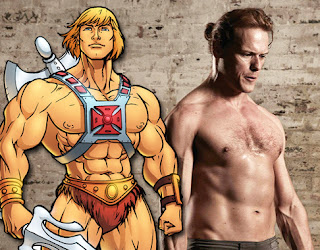 You may have to look this guy up. I wasn't familiar with him to begin with, but he's got a steady resume that includes TV mini-series for most of the early 2000's.

He seems to be making the jump to bigger roles -- starring in The Spy Who Dumped Me (with Mila Kunis and Kate McKinnon).

Even if he's not breaking records, he's working his way up the ladder.

Mostly, he has a unique look. He's somewhat slender but still looks like he could fight. 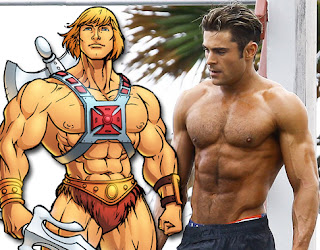 Eh. I'm not a fan of Efron, for the most part. But he's a bigger name. He's in the shape to do the role.  I'm not sure when he pumped up so much, but he looks like a He-Man, so there's that.

I certainly question his acting ability, but he's done OK in some of the more adult-oriented comedies.

He's done a couple of dramas.

I don't know that he has the talent of someone like Chris Hemsworth, but I'll grant that he's an OK actor. Not my first choice, but not the worst either. 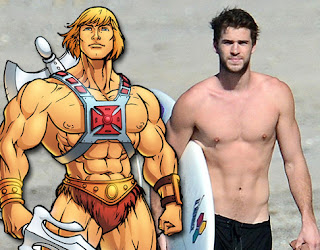 I'm not a fan of Chris Hemsworth taking the role of He-Man because he's already Thor. But I'm OK with the other Hemsworth (there's actually three of them, I think ... ) picking up the Sword of Power.

He was in Independence Day: Resurgence (not bady), The Hunger Games (seemed underutilized in a sense), Empire State (movie was 'meh') and The Last Song (I didn't particularly enjoy the movie, but he did a decent job).

He's got some visibility due to those roles, being Miley Cyrus' lover and being Chris Hemsworth's brother.

I really like that there's at least a little name recognition. His acting ... is a question mark. He could do a really good job. I'm not sure.

I don't know how his physique compares to his brother, but he's tall. He's got some natural size to him.

Plus, I think it'd be cool if two of the Hemsworth brothers played Thor and He-Man. 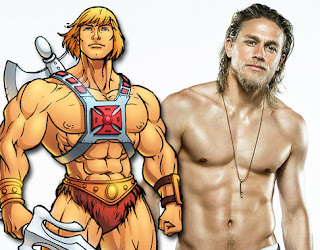 Still, give him a script read or a tryout and see how he does. He's at least someone to consider. 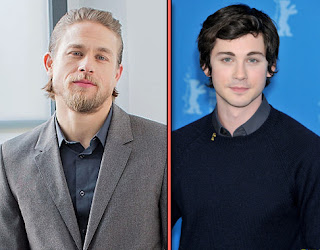 ... and Logan Lerman (as Prince Adam)

I'm not sure how they'll go about the Prince Adam / He-Man thing.  Maybe they'll just change the hair color a bit.  Or use special effects.  After all, Captain America was a skinny kid from Brooklyn in the first movie, but was muscled up by the end of it.

If they do use a different actor, Logan Lerman may be a good option.  Give him some blonde hair and he kind of looks like a young Charlie Hunnam.  Lerman may be recognizable from The Three Musketeers and the Percy Jackson movies.

He hasn't been in any big movies lately, but he's got experience.  He was a pretty good actor.  He could definitely handle the role of Prince Adam. 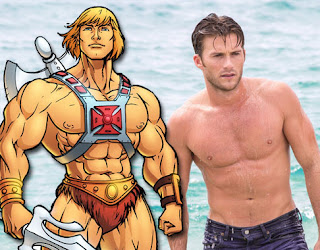 The son of Clint Eastwood. I've seen a couple of movies that he starred in: Suicide Squad and Trouble with the Curve.

Looking at his resume he's starred in some big budget movies: Pacific Rim: Uprising, The Fate of the Furious, Snowden, etc. Though I'd argue that none of them have been smash hits.

His acting may be a little to be desired, but I think he has the right look. He has a seriousness to him that would hopefully translate well on-screen. It's be nice to have him make this character his own the way others have done with Iron Man, Thor, Captain America and Superman.

If he's successful with his portrayal and the movie is successful, then he could become synonymous with He-Man.

I'm OK with that. 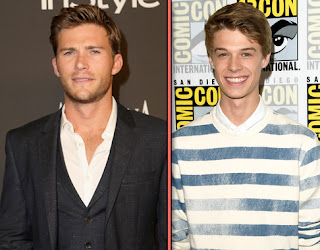 ... as for Scott Eastwood's Prince Adam counterpart, how about Colin Ford?

He's been in several shows while growing up in the business.  Most recently he filmed a part in the upcoming Captain Marvel movie.  I'm not sure how extensive a role that is or if it will continue beyond this movie, but he's no stranger to big projects.  Or smaller projects.

He's got a variety of work under his belt.

He's not the spitting image of Scott Eastwood, but he kind of looks like a skinnier, younger version.  At least somewhat.

I think it'd make it a little more believable if they had a younger actor who didn't look exactly like the older actor.  It makes it more believable.  It's kind of like the Superman / Clark Kent situation.

People are supposed to believe he's not Superman because he has a pair of glasses on? 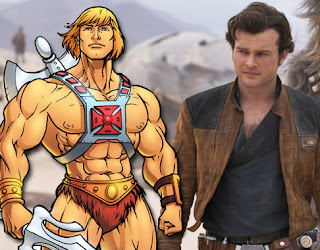 He doesn't have the presence of Harrison Ford (as Han Solo).

It was a no-win situation for him. He was stepping into a big pay day, but also into an iconic role that he didn't have a chance of pulling off.

That said, I did watch Solo. If I pretended that it was a random Star Wars character and not Han Solo, it was an acceptable movie.

Ehrenreich did a good job as an actor. He wasn't Han Solo, but he entertained and delivered on emotion.

I'd give him some dirty blonde, shaggy hair and give him a shot at He-Man.

Let's make people forget about trying to be Han Solo and make them remember you as He-Man! 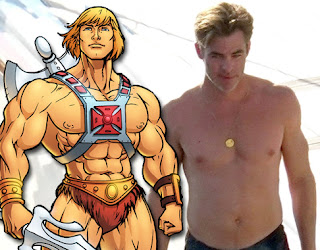 If I had to pick one person to play He-Man at this point, I'd choose Chris Pine. He's got good name recognition after three Star Trek movies and success in Wonder Woman. He's very good at the mix of being serious and being comedic and being dramatic.

He's not the biggest guy in the world, but he's got some definition to his physique. They could always make his muscles look bigger through makeup and camera shots.

He seems athletic enough to handle at least some of the stunts that would come his way.

He's really the best one for the job at this point. While he is Capt. Kirk in the Star Trek franchise, I'd argue that that role has kind of subsided a bit after the somewhat lackluster 3rd movie and the delay in the 4th movie. He's not engrained in peoples' minds as 'Captain Kirk' the way Hemsworth is as Thor or Evans is as Capt. America.

That means he could potentially make people remember him as He-Man with a stellar performance and a good script.