Is WWE about to re-introduce a women's tag team division?

It's an interesting idea. WWE did have female tag team champions in the 1980's, which is kind of funny because they didn't have half the roster they have now. It was really mostly the Glamour Girls and the Jumping Bomb Angels who made those titles worthwhile (for the short time that they were around).

Over in TNA / Impact Wrestling, they had a pair of Knockouts Tag Team Titles. It seemed to have potential, but fell to the wayside when TNA stopped putting any thought or effort into the division.  Still, The Beautiful People, Taylor Wilde and Sarita, and TNT (Tara 'n' Tessmacher) made some good television for a while.


WWE could potentially have a successful division on their hands at this point.

A few years ago, I do agree that they would have struggled with it.


However, with WWE having so many women under contract right now (it's got to be 35 or so women between Raw, Smackdown, NXT and the women who are signed to NXT but aren't on TV yet), it does seem like the time is right.

If WWE is going to continue to present female tag team matches on their various shows, they may as well give the women something to fight over. That's always been my argument, even a few years ago when there weren't too many female tag teams around.


Take a look at all the potential tag teams they already have developed: 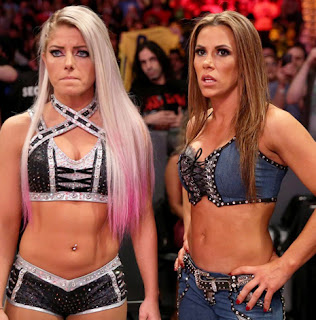 I wasn't a big fan of WWE turning Mickie James heel earlier in the year. However, I was happy to see that she renewed her partnership with Alexa Bliss. The two seem to feed off of each other very well (though WWE should give Mickie a little more shine than they are giving her now).

Plus, it gives Mickie a prominent spot in WWE as Alexa Bliss is pretty much WWE's golden child right now.

Mickie and Alexa could have very good odds at winning the tag team titles, assuming that Rousey takes the Raw Women's Title from Alexa at Summerslam.

Like I said above, Alexa is WWE's favorite female, these days. I doubt they'll keep gold off of her for very long.

It'd be a nice addition to Mickie's already impressive resume to be one half of the first female tag team champions in close to 3 decades.

Give these two Australians a microphone and I'll be watching. They're very entertaining. The whole bit where Peyton does impressions and Billie cracks up at it gets me laughing every time.

They were a little more entertaining in NXT because they seemed to have more of a goal: rising to the top of the women's division. They had a few solid feuds and they were frequently added to the title picture.

On Smackdown they seem to just be 'there.' No feud or real direction for them at this point, which is a shame because they're so entertaining. I think it's because WWE is trying to strike a balance on Smackdown. They don't want Charlotte or Asuka's status to fall, they're trying to keep Becky Lynch elevated, they're pushing Carmella and they still have Lana and Naomi they to remember.

That doesn't leave much room for the Aussie's.

A division like this would do wonders for these two ladies. I don't know if they'd be the initial champions, but I think they'd definitely be one of the final four teams. 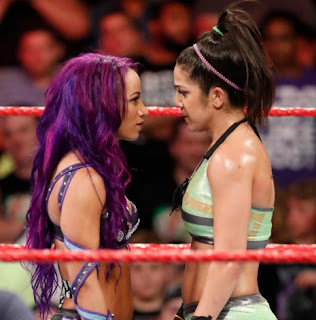 I think Bayley and Sasha end up becoming the first female tag team champions in this revived division. They already have this love-hate storyline going. It is kind of perfect for their on-again-off-again feud.

WWE could ruin it, I'm sure. But it seems to write itself.

Then again, WWE could use this tag tournament as a way to further their feud -- having them lose in the first round and then still go one-on-one at Summerslam. 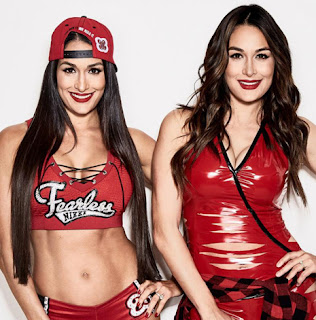 As much as I dislike these two for the amount of attention they get and their lack of really good wrestling skills, I'll admit that they put in years of work for a division like this to happen.

They were keeping female tag team wrestling alive at a time when there were random matches thrown together and time was cut left and right.  They obviously have the advantage of being sisters.

Just like they were involved in the inaugural women's Royal Rumble, I fully expect them to be involved in any tournament that takes place.  Unfortunately, they'll probably be one of the final four teams involved.

It'd be nice if they could pass the torch on and not actually hold the championships (at least not right away ... they can have a feel good win sometime in the next couple of years if they don't fully retire before then).

But it does make sense for then to be involved. 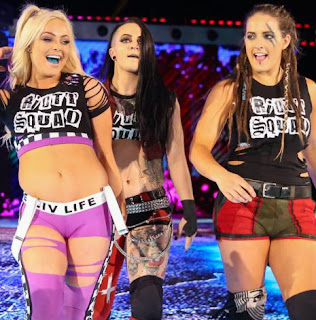 While technically a trio, this group ended up being a lot more natural than Absolution. It's ironic because when they first debuted, The Riot Squad seemed like more of a rip-off of Raw's Absolution trio. Fast forward and The Riot Squad seems to have more chemistry than Mandy Rose and Sonya DeVille.

They're a unique case because they're a trio.  Not a full-on faction and not just a tag team.  What they have going works.  They adopted Ruby's theme music and lettering for their t-shirts.

They didn't give up their individual personalities, but they don't seem thrown together because the name of their group, itself, explains it: they're chaos.  They're The Riot Squad.  You could theoretically introduce another female from NXT into their team and she could potentially fit right in.

As long as they come out to the same music, have a somewhat choreographed entrance and wear the t-shirt, there's a sense of partnership there.  Kind of like the n.W.o.  They put a lot of wrestlers into that group that didn't necessarily make sense, but there was always a group mentality that made it work. 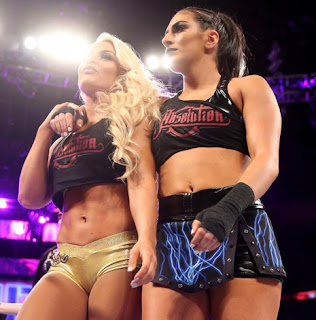 The whole introduction with Paige and the name seemed a little unusual.

However, WWE stuck with it and these two have been successful enough considering they are still learning and they've been on TV for less than a year.

There is a real life friendship with Mandy and Sonya, so it doesn't seem too forced.  They're a good team to to build up whoever the champions end up being.  They'd be a good first feud for the champions.

They're legitimate enough and developed enough, but they won't really suffer from a loss. 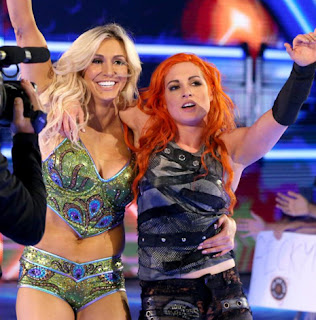 It's interesting looking at the various relationships and dynamics with WWE's 4 Horsewomen. Bayley and Sasha seemed to gravitate towards one another in real life, while Charlotte and Becky were always very close.

That's how it eventually ended up on the main roster, too.

Personally, I find Charlotte and Becky to be the two least charismatic and least athletic of the WWE's 4 Horsewomen. However, their pairing makes sense. It's natural. That's always a key when forming tag teams with established superstars.

These two women have quite the history, too. Becky was Charlotte's first Diva's Title challenger a few years back. Charlotte was the first of many to stab Becky in the back.

Since both ended up on Smackdown last year, they've tagged several times and their friendship has continued to grow. 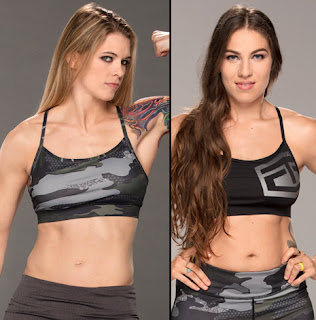 This seems like an obvious choice. With Shayna Baszler running the NXT women's division (in a very entertaining manner, by the way) and Ronda Rousey on Raw, it seems like the two remaining members of MMA's Four Horsewomen would fit right in a tag team division.

I've read that how long Ronda will stick around in WWE is a question mark, so if WWE wants all of these women to interact or play a part in a possible 4 Horsewomen vs. 4 Horsewomen feud (or even a Ronda / Shayna feud), then introducing Duke and Shafir into a potential tag team division and tournament seems like a good idea.

I'm not sure how experienced these two women are, but tag team matches may be an easier way to disguise any lack of experience they may have. 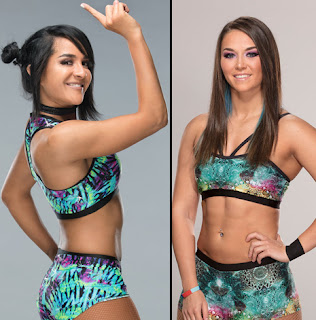 I don't know much about Tegan Nox at all, but I do know she and Kai are good pals. They've already got matching gear. May as well have them team together. Makes sense to me.

They'd be a very good babyface team for a pair of heel champions.  Kai is good, but she's not ready for a run with the NXT Women's Title.

A nice tag team run (whether they end up as champions or not) would be a great way for Kai to continue to develop and for Nox to debut in front of the WWE Universe.

Otherwise she'll be the Marty Jannetty of this team ... but that's looking way down the road. 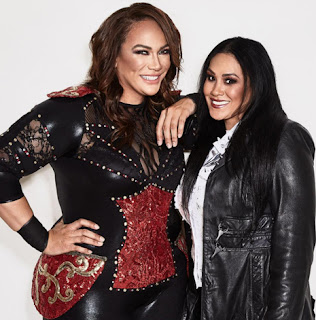 While Nia has a very uncharismatic partnership with Natalya right now, that 'story' will hopefully go away soon.  It seems rushed, unnatural and uncharacteristic for both ladies.

A returning Tamina to partner up with Nia would be very appropriate given the strong Samoan lineage in the WWE tag team division. It'd be very fitting if this duo won the titles within the next year.

Let's be honest: it'll probably be the only championship Tamina wins while in WWE and it'd be a nice way to give her a reward for her years of hard work, despite never making it to the top of the singles division.

It'd give Nia something to do until she's back in the Women's Title picture, too.

That's 10 teams right there (more than a couple of the men's tag divisions).

Meanwhile, they've got other women on the roster who could be paired into tag teams fairly easily.

Alicia Fox and Natalya are two veterans who are good pals in real life, so I wouldn't be opposed to seeing them team up.

Maria has never been the best wrestler, but she could potentially form an interesting team with someone like Carmella or Lana or Zelina.

Naomi and Ember would be an incredible pairing, of course.  The most athletic of all the women on the roster!


Let's not forget that WWE is having the 2nd Mae Young Classic in August.  So they could end up signing some of those ladies, too.


If WWE is going to introduce women's tag team titles, it's up to them to make it work.  They definitely have the talent for it.

The key is to make this a cross-branded division.  It won't work if it's just for one roster.

I say: go for it!  Give it your best shot.  Now is the time to make this kind of move.