10 TV shows and movies that aren't on DVD, but should be

The other day I was shopping at Target and I walked by the DVD section.

It did my heart good to see several He-Man DVDs, sitting proud and prominent with the rest of the children’s DVDs.

I’m a huge fan of He-Man, so I waited for this one to come out on DVD for a long time.

It seemed the Masters of the Universe franchise never got the recognition I felt it deserved. While The Transformers and G.I. Joe were brought back as live action major motion pictures, He-Man’s only film adaptation is stuck in the 80’s, with cheap effects and a poor plot.

About five years ago, the rights were finally sold to a distributor and the classic He-Man TV show from the 1980s were available to DVD. Hopefully today’s generation of children will be able to enjoy it as much as I did.

Seeing He-Man on DVD got me thinking about other movies or TV shows that aren't on DVD, but really ought to be. Here are 10 of the TV shows and movies that are on my “It should be on DVD!” list: 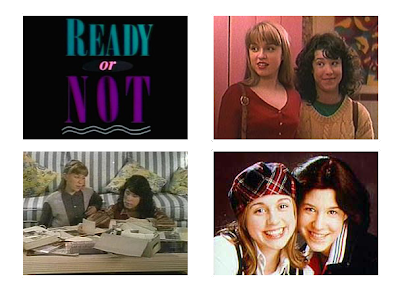 Honorable Mention: Ready or Not (1993-1997)
It was incredibly hokey, but Ready or Not was a fun show that aired on the Showtime Movie Channel and the Disney Channel for a few years.

It was about these two girls --- Amanda Zimm and Elizabeth "Busy" Ramone -- who were best friends. They're middle school girls, so they faced a lot of the same problems that the folks on 90210 and Saved by the Bell faced: drugs, mean girls, and relationships.

Honestly, I can understand why it was cancelled. However, it would be nice to see it released on DVD, even if it's just for nostalgia purposes.

Where you can see this show: YouTube is the only place I know of that you'll be able to watch this one. 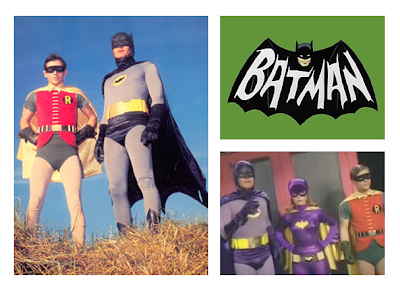 It’s campy and the special effects can be gruesome to watch, but it’s Batman. With an already built-in fan base, it seems only logical to tap into that. They could promote the fact that it’s campy --- the opposite of The Dark Knight trilogy.

There are rumors that Warner Bros. and D.C. Comics have finally worked out a deal to release the show on DVD, but there hasn't been a release date set.

Where you can see this show: Reruns are still shown in syndication in some places. Unfortunately they're hard to find. God Bless YouTube though. You can watch full episodes there. 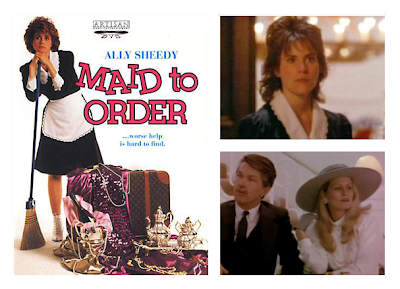 9. Maid to Order (1987)
It’s a Cinderella-like plot, only backwards. Instead of the poor, kind-hearted peasant girl becoming a princess, a spoiled Beverly Hills twenty-something woman gets a harsh reality check when her fairy godmother (Beverly D’Angelo) casts a spell on her.

The girl’s father, played by Tom Skerrett, doesn’t recognize her, so she’s forced to make it on her own. It’s a fun story with a nice lesson it. Highly underrated in my opinion. I’m actually really surprised it can’t be found on DVD because, despite the 80s fashion, it’s a pretty timeless story.

Where you can see this movie: It is on Netflix, so if you have a subscription, you should be able to get it there. Otherwise, your best bet is probably on VHS. 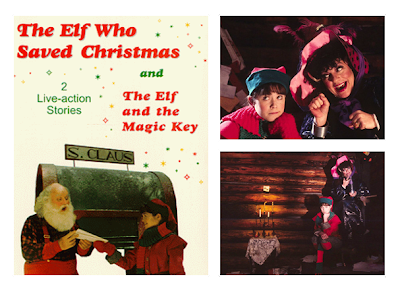 8. The Elf Who Saved Christmas (1992)
This Christmas it took me two hours of Googling to find the title of this one.

It's so rare that IMDB doesn't even have it listed. I remembered a few minor details about the plot, but I had no idea what the show was called. I knew that I watched it on the USA Network in the 1990s and that an elf got sucked into a mailbox by a mean witch who wanted to ruin Christmas. It's a story that's probably meant for a kid, but it's fun to watch even as an adult.

Thankfully a few people on forums out there remembered the movie as well. If they hadn't, I may have gone crazy trying to figure out what this movie was called.

Where you can see this show: Nowhere that I can find. Maybe one day some kind soul will post it on YouTube. 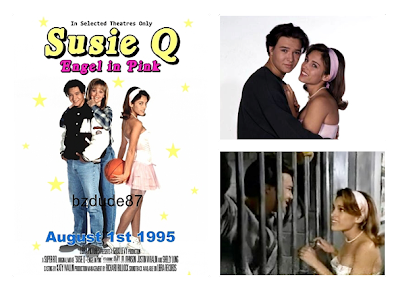 7. Susie Q (1995)
One of Disney’s original made-for-TV movies, Susie Q (from what I can remember) was about a teenage girl who dies in a car accident and comes back to her old house several years later. I’m fuzzy on the specifics of the plot, but a teenage boy and his family are living in Susie’s old house. Susie haunts the boy, but eventually they help each other out. I’m pretty sure they fall in love, which, of course is problematic since she’s a ghost. Amy Jo Johnson, possibly better known as the original pink Power Ranger, does a great job playing the Susie Q character.

Where you can see this show: Some people sell VHS and homemade DVDs on eBay, but I haven't seen it anywhere else. 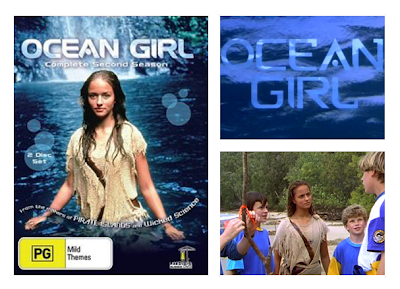 Neri, who was basically a mermaid without the fins, was an alien from another planet where communicating with the sea life was the norm. She got stranded on Earth though. There are some young teenagers who live in an under water scientific research ship with their parents, who are scientists.

These teenagers somehow figure out her story and end up traveling back and forth to her secret island. It’s been years since I’ve seen the show, so I don’t remember all the specifics, but the teens were always doing their best to make sure nobody ever found out about Neri. After all, they didn’t want her becoming some kind of lab rat for the underwater scientific research team.

Where you can see this show: I saw it on DVD at a recent comic book convention. It was priced insanely high so I didn’t buy it. Plus, I didn’t know if it was a DVD that would play in my region. I was tempted to get it though. 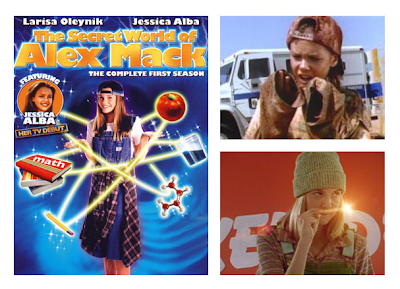 It was like the Nickelodeon version of The Amazing Spider-Man. After an accident that involved a truck full of dangerous chemicals, Alex Mack, a young teenage girl, ends up with some extraordinary powers. She can shoot bits of electricity out of her fingers. She can make things float through the air. She can also turn herself into a clear liquid-like puddle (very handy if you’re trying to slide under doors, which Alex seemed to do a lot of).

Alex’s father worked at the plant that produced these chemicals. He was a scientist who had no idea that the company he worked for was an evil corporation that didn’t care about the environment at all. Alex slowly figures this out and tries to stop them from carrying out their dastardly deeds, which is pretty much the main plot for the entire show.

There are side issues that come up as well. Most of them have to do with high school. Even a teenager with super powers has typical teenage problems. Unfortunately, I haven't seen this show for years, so I don't remember much else about it.

Where you can see this show: The first season is available on Netflix. 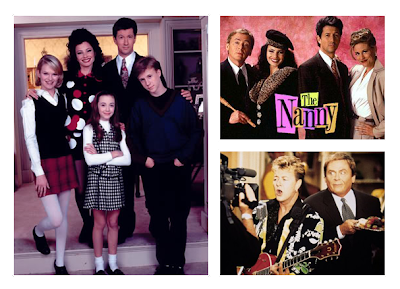 For some reason, this popular show’s first three seasons were released on DVD, but after that it stopped.

Seasons four through seven are missing. I heard it was because there were guest stars on the show and they haven’t all signed talent releases. It’s a shame that personal greed seems to have gotten in the way of preserving the longevity of this TV show. It's filled with hilarious moments, so hopefully they can get the paperwork figured out.

Where you can see this show: reruns are shown on TV Land, The Hallmark Channel, and Nickelodeon. 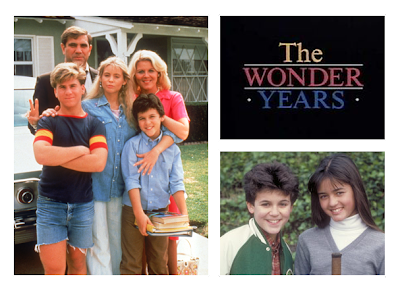 It's just too much of a classic to not be released on DVD. It won an Emmy for best comedy series after just six episodes aired. Fred Savage was the youngest actor ever nominated as Outstanding Lead for a Comedy Series.

The Wonder Years wasn’t your typical comedy series, as it wasn’t filmed in front of a studio audience and it dealt with issues that weren’t touched upon by other series.

The main plot, of course, was the romance between Kevin Arnold (Fred Savage) and Winnie Cooper (Danica McKellar).

I haven't done much research on why the show isn't out on DVD. I'm still just baffled that it's not.

Where you can see this show: You can watch it on YouTube, download it on forums, or buy user-made DVDs on eBay. 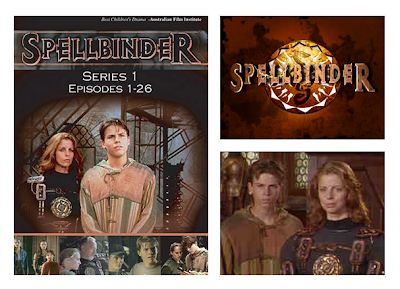 It, too, was filmed in Australia. A teenage boy is camping with his father when there’s some kind of power line accident. The electricity opens up a portal to a different world that’s like Camelot meets Star Wars. There’s a castle where the Spellbinders live. They are basically magicians who have used science to their advantage.

They use science to power their flying ships and their energy suits that shoot balls of electricity. The energy suit is one of my favorite concepts ever. I spent a good year pretending I was a Spellbinder.

The plot in the show thickens when Paul, the teenage boy, is befriended by the devious Ashka.

She, a Spellbinder, wants to travel back to Paul’s world, where she feels she could rule. I remember her making it back and causing a bit of destruction, but I don’t remember what happened past that. The second season of Spellbinder, without any of the same characters, aired on ABC Family, but was cancelled. In all fairness, the second season deserved to be cancelled. The first season, however, should have lasted a lot longer.

Where you can see this show: Some episodes are on YouTube and you can download torrents of it on certain forums. 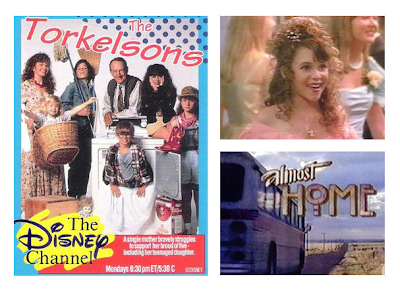 Millicent Torkelson (Connie Ray) lived with her five children and their boarder, Wesley Hodges (William Schallert). After Millicent and her husband divorce, it's up to Millicent to take care of the family.

The show was restructured in the second season, renamed Almost Home.

Two of the kids disappeared (shhh! - we're not supposed to know they ever existed) and the family moved to Seattle after Millicent took a job as a nanny. Some pretty famous names (they’re famous now anyway) were added to the show.

The stars of the show, in my opinion, were always Millicent and Dorothy Jane Torkelson, Millicent's oldest daughter. Actress Olivia Burnette brought the Dorothy Jane character to life.

Thankfully they were kept throughout both seasons.

Where you can see this show: Some episodes can be seen on YouTube. Unfortunately, that's the best bet at this point.