I checked out Oprah's Favorite Things list recently. Sorry, O, but I can't say I'm intrigued by almost any of it.

To counteract that list, I'm presenting to you today: Batson's Favorite Things 2013. 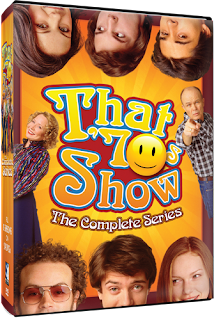 You can find this series at various places online, but I got this for under $40 at Sam's Club recently. Talk about an amazing deal! Considering The Big Bang Theory is going for around $30 a season, I was thrilled to see this deal.

I know it's all about supply and demand. That 70's Show ended in 2006 has been played several times over in syndication since then. One day the complete series of The Big Bang Theory may be going for $35 too.

Outside of a handful of other sitcoms, That 70's Show is my favorite. It's one of those shows that you can put into the DVD player and watch at all times, no matter what you're doing. You can watch it while you're busy cooking, while you're doing laundry, while you're hanging out with friends, or while you're by yourself and relaxing after a day of work.

Wow! I almost didn’t stop at Bowtie Bakery. That would have been a huge mistake.

I was up at Concord Mills Mall and I decided to check out Purple Cow Bakery. I arrived at the address I had for Purple Cow, but there was no bakery there.

I Googled the store and one of the search results that came up was “Bow Tie Bakery.” It looked like Bow Tie Bakery was near the Carolina Place mall.

Frustrated that Purple Cow evidently moved or went out of business, I was going to call it a day and head home.

While driving towards Interstate, I passed the mall. I did a u-turn and found Bow Tie Bakery – located next to Sogo Japanese Seafood and Steakhouse in a strip mall.

I’m not sure what I was expecting, if anything, when I walked inside. What I got was a huge selection of cupcakes. Each one was a different, enticing flavor and was visually impressive.

I probably spent 10 minutes trying to decide which cupcakes to get. I ended up choosing five of them. I ended up sharing them since I bought so many, but I had a few bites of each one. 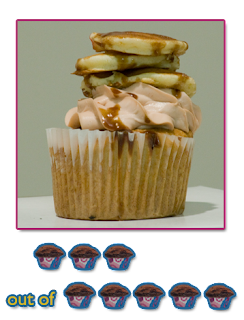 I was unfortunately expecting too much out of this cupcake. With it looking the way it did, who could blame me? It looks incredible.

Essentially it was a vanilla cupcake with strawberry frosting. The mini pancakes on top provided the ‘pancake’ portion of the title. There was syrup on top and a little cinnamon mixed in with it.

The cupcake was good. It was a typical, fluffy vanilla cupcake. The frosting was tasty too. I was expecting more of a maple overload though.

I think it would have been better if there was more maple and cinnamon included. A vanilla cupcake with strawberry frosting, maple syrup and a pinch of cinnamon isn't a bad thing, but it's certainly not amazing either. 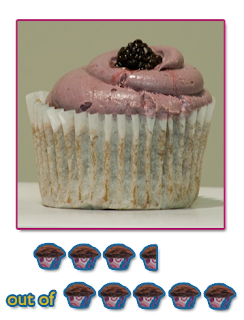 This was not my favorite flavor of the bunch, but it wasn’t bad. There was a very vivid berry taste in the cupcake.

There wasn’t much sweetness included that taste. I don’t know if they didn’t use very much sugar while making the cupcake or if the wine counteracted the sugar that was used.

The result was a good cupcake – probably very good if you like wine. When it comes to wine, or cupcakes for that matter, I like a little sugar.

Thankfully the blackberry cream cheese frosting provided that. Without the frosting I probably wouldn’t have enjoyed the cupcake too much.

I definitely give them props for experimenting with flavors and going forward with this cupcake though. It was the one that I was most intrigued by while I was looking at the dozen or so flavors available. 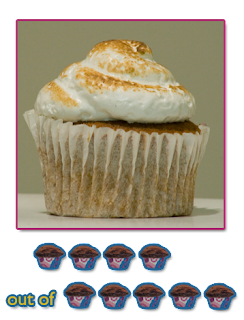 This was a delicious cupcake. Of the five it was my favorite. I’d never had sweet potato pie before, but I was pretty sure it was similar to pumpkin pie.

I’d had two pumpkin cupcakes in October and while this sweet potato cupcake was similar it had its own flavor.

There must be a different spice used with sweet potato flavoring.

The frosting was marshmallow like. It was sticky as if it’d been roasted over a fire.

That made for a nice change. Usually frosting is frosting, but the different consistency with this frosting made the cupcake.

I could have eaten a couple more of these cupcakes easily, but there were too many other choices to choose from. 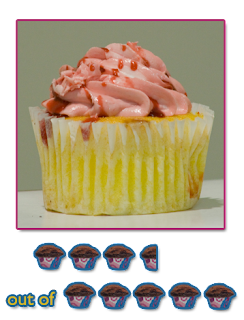 When I was in the store, I eagerly picked out the raspberry lemonade cupcake as one I wanted to try.

After being a little disappointed with the maple pancake cupcake and the wildberry wine cupcake, I was a little hesitant to eat this cupcake. On paper and in the display case it looks like it’d be good, but I didn’t know if it would turn out that way.

It had an interesting taste to it. It had a flavor that would make Willy Wonka proud.

The first flavor my taste buds picked up on was the raspberry (probably from the frosting). Then came the lemonade flavor of the cupcake. Each bite ended with a raspberry flavor though.

The drizzly syrup that covered the frosting and ran down the side of the cupcake really cemented the raspberry flavor.

While I wasn’t blown away by it, I’d buy this cupcake again. 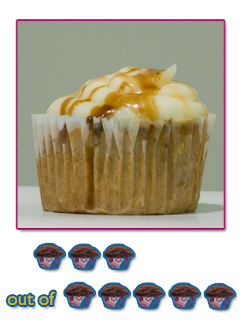 This cupcake really tasted like a piece of apple pie. The caramel was plentiful and I was thankful for every bit of it.

There's rarely anything as good as homemade apple pie, but when it comes to caramel apple cupcakes, this one did its job.

Like the previous two cupcakes, the caramel apple cupcake was edible all by itself. It was tasty. It was moist. The caramel is what I enjoyed the most though.


The positives: the variety of flavors and the ambiance of the shop were even more appreciated than the good flavors

The negatives: not every cupcake was a must-have

The price: most of the cupcakes are $2.25, but they have specials