So it finally happened. Wonder Woman made it to the big screen in her very own movie.

If you haven't seen it, I'll leave most of this blog spoiler-free (spoilers at the very bottom). 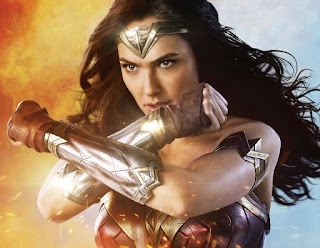 I had high hopes for this movie for more than one reason. DC needs a boost in their superheroes movie plan. Marvel obviously got a big head start with their Cinematic Universe, but DC Comics has been trying to get on track.

While I was a fan of Man of Steel, I really liked the extended cut of Batman v. Superman, and I liked Suicide Squad, they all had mixed reviews. None were as well-received as some of the Avenger movies or Captain America 3 (which was basically another Avengers movie) though.

Meanwhile, with DC going all-out on their female heroes and villains (Wonder Woman, Batgirl and Gotham City Sirens), it's possible that Marvel may take notice and finally pull the trigger on a Black Widow movie. That's a character that really should be given it's own movie -- even if it's just a stand-alone movie and not one with several sequels.

So, how was it? Will this be a boost for DC? I think so. The movie was definitely a success.

And that's saying something because it had a lot to accomplish. While Wonder Woman was first briefly introduced in Batman v. Superman and she's been in the trailers for the upcoming Justice League movie, this was the first time we saw her on her own. No help from the more established Superman or Batman.

Additionally, the movie had to help set up the Justice League movie that comes out in November.

So, basically, not much room for messing up. 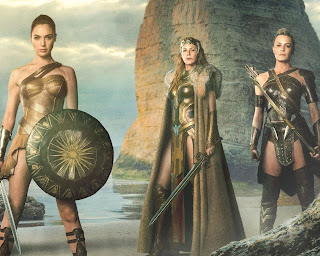 The movie was a combination origins story and fish-out-of-water story. It told the story of Diana Prince and how she grew up with the Amazons. Steve Trevor was, of course, introduced.

The flirtations between the two characters began almost immediately, but Wonder Woman wasn't depicted as a giggling little schoolgirl.  It was more of a instant connection.

Chris Pine did well with the comedic bits and banter with Wonder Woman.

It wasn't the sarcastic quips that you'd get out of a Tony Stark or the slapstick that you'd get from Peter Quill, but Pine provided some subdued levity throughout most of the movie and was a good love interest / balance to Wonder Woman. 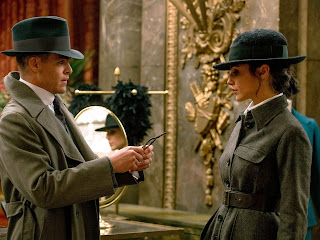 After Diana left her safe environment to go out to help save the world, we got a bit of comedy with Diana having to fit into the then-modern world of the 1940's.

Diana knows multiple languages (there's a funny scene that showcases that!) and has knowledge of combat, literature and even pleasures of the flesh ( there's another funny scene that references that).

Having never been to London before, however, she's certainly not accustom to the modern way of life or the limited power that women had in that day and age. 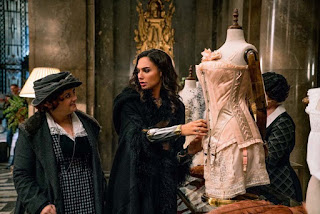 Once we get to London, we get introduced to Steve Trevor's secretary, who was absolutely hilarious in every single scene she was in!  She seriously stole those scenes.

Unfortunately it was almost as though she was acting with herself.  There weren't a lot of responses to her comments.

I think she could've been even funnier if there was a little more back-and-forth with the other characters who she was sharing the screen with.

Instead, she was basically there for a quick one-liner and it was onto the next bit of dialogue -- without leaving enough time to laugh or react to the one-liner that was just delivered.

Instead of being laugh out loud funny, as she could've been (the actress really did nail every single facial expression and line she was given), it was more of a chuckle moment.  There wasn't enough time for those moments to breathe before moving onto what was next.  I know that's a small timing / pacing complaint, but it took just a little bit away from the movie being incredible.

Nonetheless, she was a great character to add to the dynamic. 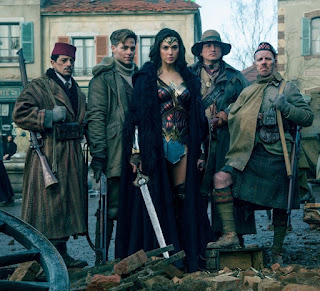 A few additional sidekicks / bit players were added from that point on.  They added a few touching moments to the movie along with some comedy.

They also helped to tell the overall story of people --- who they are and if they are worth saving.

Having never been exposed to anyone outside of the Amazons she was raised by, Wonder Woman did a lot of people watching in this movie.

She was inquisitive and perceptive.

The writers tied some of those moments into the overall story very well.

Eventually, there was a nice little team assembled to try to fight the Nazi soldiers, the evil General Ludendorff and Dr. Poison (a mad scientist whose only objective was to create more lethal versions of deadly gas). 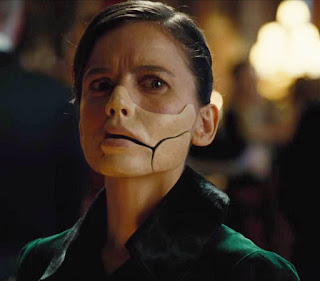 Dr. Poison was a pretty good character.  She was a little bit stereotypical -- a character that might fit right into the first Captain America movie or on a Hydra team from Agents of S.H.I.E.L.D., but the actress performed well and the character certainly didn't hinder the movie.

There were a couple of 'unexpected' turns (though I saw them coming).  I didn't expect the turns to be so well executed, however.

I won't spoil what those moments are, but you'll know them when you see them.

The cinematography was great throughout the movie.

It was somewhat Matrix-like, but the slow motion twists and turns and punches made it seem almost ballet-like.

There were a couple of somewhat cringeworthy CGI moments, but they were literally split seconds long.  The golden lasso of truth?  It didn't just look good, but it looked convincing as a weapon. 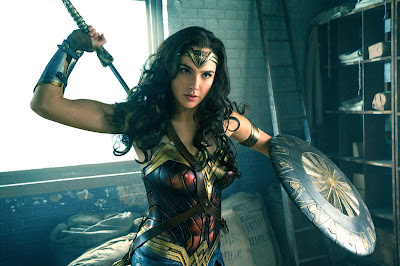 The costuming (whether it was in Diana's homeland or in London) was on point, too.  There was even a humorous mini-costume change montage!

While there was some comedy in this movie, there were also a moments of great hope and triumph.

Wonder Woman truly was every bit the hero in this movie that Superman or Batman or Iron Man or Thor are in their solo movies.

She displayed courage, conviction, superhuman abilities and she looked good while doing it.

Steve Trevor (and some of the other mortals) were the 'damsels in distress' in this movie.

On the opposite side of the emotional spectrum, there were some dramatic moments that could almost bring a tear to your eye. 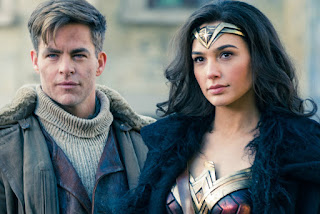 It was a multi-layered script with story A) Diana's introduction to humans and the modern world, story B) Diana's quest to save the world from evil, story C) Steve and Diana's relationship.  By the end of the movie, each of those stories had a conclusion.

There were a few stereotypical superhero movie moments. There were also a couple of cheesy romantic moments.  Not many, but I do have a list of a few changes I'd make to make the movie that much better.

It was just that little bit of pacing issues that takes away from the movie.  A couple of mis-placed comments that didn't fit in a World War II setting. 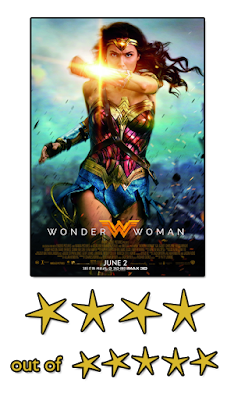 At the end of the day, it's not much to complain about, but Marvel has spoiled us by perfecting the super hero / action movie that has comedy and drama and suspense all in one 2+ hr showing.

If DC can continue down this road, Marvel had better watch out because the competition is here.

Overall, Wonder Woman tells a decent story, was a good effort, has very good production and is a really good movie -- thanks, in large part, due to an exceptional performance by Gal Gadot, which overshadowed any minor complaints I had.

DC better hope Gadot stays healthy and willing because she can be a huge part of their cinematic universe.

Her facial expressions, mannerisms and delivery were all extremely good here.  Wonderful, you could say (speaking of cheesy... ).

- I want to live on that secret island Diana grew up on ... talk about a Mediterranean paradise!

- Chris Pine was pretty brave to do that nearly nude scene

-  that line where Diana's mom said 'You were always my greatest treasure.  Today you are my greatest sorrow' was pretty powerful

- the dancing scene with the snowfall was nice ... though I half expected Wonder Woman to break out into some kind of dance (glad she didn't!)

- the bit where Wonder Woman was sizing that rich woman up, seeing if she would fit into her dress --- that was pretty good

- it was a powerful moment when Wonder Woman was in the gas-filled village ... they didn't need to show much of the deceased for it to be powerful

- I knew that Sir Patrick was a bad guy, but I didn't anticipate him being Ares (I figured Ares wouldn't even show up in this movie)

- when it was clear that Sir Patrick was Ares, I was skeptical s to how they'd pull it off, but he seemed pretty legit as a bad-ass God of war

- the most powerful moment of the movie, without question, was when Steve was saying goodbye but Wonder Woman couldn't hear what he was saying (due to the recent explosion that left a ringing in her ears) ... they should've left it at that -- without her knowing what he said

- the speech at the end with 'love triumphing over hate' was a little too simplistic seeing as how the real world just doesn't work like that ... it would've been more realistic to say something like 'For all the bad there is in people, there is a good and hope that will always triumph over hate' -- or something like that