Old school doo-wop meets new age pop. It’s a style that Bruno Mars has all but perfected since his debut album years ago. I’m not sure there’s another artist out there today who could make the kind of music Mars does. It’s very…..unorthodox. It’s fitting that his latest album is titled Unorthodox Jukebox.

Bruno belts it out in his now-trademark style on his sophomore album. The songs on Unorthodox Jukebox are like an eclectic mix of Elivs’ rock, Michael Jackson’s pop hits and Elton John’s ballads. There’s even a bit of reggae thrown in there.


Young Girls: Bruno is at it again – spending more money on girls who just don’t appreciate him.

“I’m addicted and I don’t know why/Guess I’ve always been this way
All these roads steer me wrong/But I still drive them all night long.”

Bruno obviously doesn’t do a ballad the way someone like Adele does, but he does it very well in his own style. It’s a great follow to “Grenade.”

Locked Out Of Heaven: This one was definitely the most rocking song of the bunch and an appropriate choice for the first single. Every time I hear it on the radio I turn the volume up. It's impossible not to be infected by this one.

“You’ve got your legs up in the sky with the Devil in your eyes/Let me hear you say you want it all,” Bruno sings.

“You’ll be banging on my chest – bang, bang – 'Gorilla’/You and me baby, making love like gorillas.” 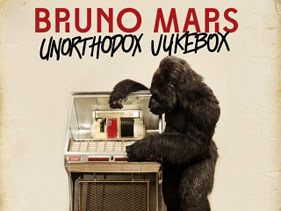 Bloodhound Gang had success with the lyrics on “Discovery Channel," but unfortunately it doesn't quite work for Bruno.

He's has done a good job with making some unusual lyrics come off as legit in the past, but even he can’t make it work on this track – which comes complete with gorilla sounds in the background. He does get points for originality and effort though.


Treasure: Bruno Mars could’ve easily fit into any number of musical eras. This is a tune that could be taken right out of the 70s.

He’s trying to woo a woman in this disco throwback. I’m not sure if it’s an effective wooing song, but it sure is fun to listen to.


Moonshine: This is probably the most unusual song on the album.

I’m not really sure what genre this song would fit into. It wasn’t a fast tempo, but it wasn’t exactly a slow one either. It sounds like it borrows from the 70’s club scene, but it still feels uniquely fresh.

Moonshine is about rekindling with a former lover while possibly being under the influence of some moonshine.


When I Was Your Man: Bruno takes it down a notch on this one, sending out an apology for neglecting his woman. The lyrics are simple and effective.

Mistaken in his priorities, he sings, “Too young, too dumb to realize that
I shoulda’ bought you flowers/And held your hand/Shoulda’ gave you all my hours/When I had the chance."

You can really feel his sincerity on this one. He successfully shows his softer side and makes you realize that there’s a crapload of vocal ability there.

Natalie: Whoever Natalie is, she scorned Bruno Mars good.

“I’m diggin a ditch for this gold diggin’ bitch/Watch out she’s quick.”

Message received – loud and clear. Bruno turns whatever heartbreak he had into a fun track that will have you tapping your fingertips against the steering wheel if it ever ends up on the radio.


Show Me: This is Bruno Mars’ island track. It’s his best Bob Marley and it works for him. As he’s trying to woo his woman with this song, the song conjures up images of crystal-blue waves crashing against the beach and someone sipping a coconut drink.

I don't know if the wooing works, but it is a fun song to listen to.


Money Make Her Smile: The theme of this track, as you can probably guess by the title, is about a gold-digger.

“It’s not complicated, so this won’t take a while/You see, music make her dance and money, money, money make her smile.”

Mars lives up to that line on this song. He keeps it simple with repeated lyrics and beats.


If I Knew: Ending the album with some 50s crooning, Mars shows that if there was any doubt before, he’s got the knack of mixing different eras to create a very modern sound.

"I wouldn't have done all the things that I have done/If I knew one day you'd come."

A heartbreak song here, it's almost as good as "When I Was Your Man," but not quite. Still, a very good track, ending a very good album.

I wouldn’t be surprised to hear a number of these songs hit the airwaves over the next year or so. When it comes to making pop music, Bruno Mars is becoming an innovator.