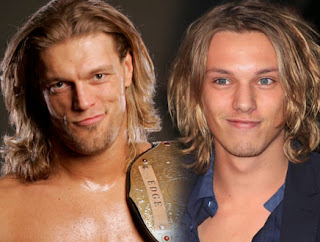 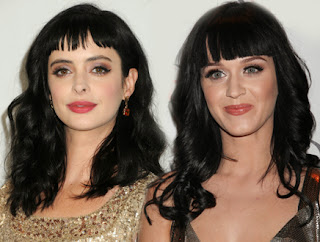 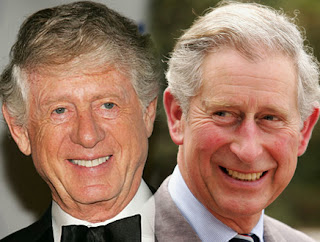 On the left: Ted Kopel
On the right: Prince Charles

Although he doesn't look like a twin, Ted Kopel may want to take ask Queen Liz to take a paternity test. He's got wrinkles in the same spots, the same lines around his smile, and the same ears as Prince Charles.

His nose isn't quite right though. Kopel's nose seems to have more of a point in it, while Charles' nose is more flat.

Ted Kopel seems to have invested in a better teeth whitening toothpaste as well. Looking at this picture, it seems Kopel has the better head of hair too.

If they are related, it seems the gene pool was nicer to Kopel than Charles. 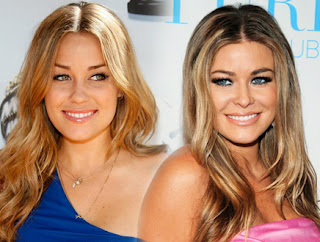 On the left: Lauren Conrad
On the right: Carmen Electra

If Lauren Conrad's fiance wants to see what she'll look like in about a dozen years, all he has to do is Google Carmen Electra.

The slim, toothy smile. The cat-like eyes. The rounded, yet pointy chin. Carmen is an aged version of Lauren Conrad if there ever was one. Carmen still looks fairly young herself, but part of that is probably due to some plastic surgery.

Because of that, I'm not sure how much of these similarities are natural. I guess maybe Lauren Conrad's fiance should probably get Carmen Electra's surgeon's contact info too, just in case. 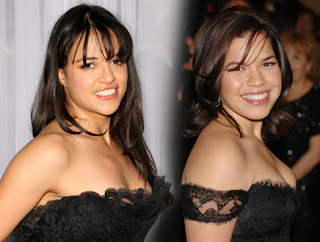 On the left: Michelle Rodriguez
On the right: America Ferrera

These two aren't exactly the same, but they could pass as cousins or relatives of some sort. America has a more rounded face, while Michelle is a little slimmer.

They both have the same dark features though, from the hair to the eyes to the skin tone. Style them up the same and it'd be hard to tell them apart.

America's career hasn't exactly been booming since Ugly Betty ended, but she should rest easier knowing that if anything ever happened to Michelle Rodriguez, America would probably be the leading candidate to take over the role of "Letty Ortiz" in Fast and the Furious 7 or any sequels that follow.

Who says looking like someone else is a bad thing? 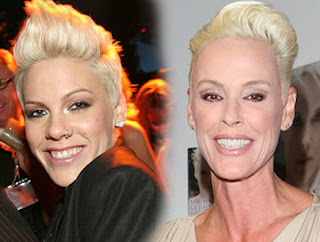 On the left: Pink
On the right: Brigitte Nielsen

What'd you think of the Lauren Conrad/Carmen Electra comparison earlier? If you didn't agree with that one, try this one.

She was a big deal in the 1980s – starring in Red Sonja, Rocky IV and Beverly Hills Cop II. Since then she’s been starring in lower-budget movies.

I know her best from her appearances on VH1’s Flavor of Love and Celebrity Rehab with Dr. Drew.

Now 50, Nielsen has evidently done a decent job taking care of herself. If Pink looks like Brigitte in 20 years, she probably won't be complaining too much.

Minus the age difference, they already look a lot alike now with the dark brown eyes, the bleach-blonde hair poof and the large white smile. 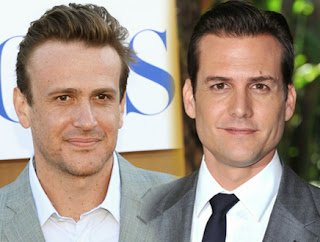 On the left: Jason Segel
On the right: Gabriel Macht

Just like with Katy Perry and Krysten Ritter, these two don't look completely alike. In fact, there are several things that set them apart. Gabriel has a square jaw line, while Jason Segel's is more rounded.

Their foreheads seem to be about the same size, so there is one similarity. The feature that looks the same to me is the eyes.

If they were wearing ninja masks, they could probably pass off as each other. That's my take on it anyway. 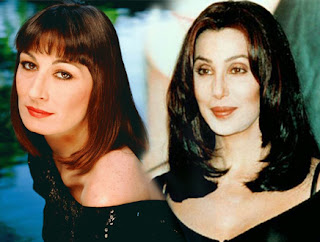 On the left: Anjelica Huston
On the right: Cher

Neither one of these ladies has aged terribly well. In this photo of Cher, she looks old and tired. Meanwhile, looking at this photo, Anjelica Huston seems to have let herself go. As they've aged the similarities they once had seemed to have disappeared. I'm sure plastic surgery can be credited for that too.

Circa 1999, however, these two women looked the same -- or at least close enough to be passable sisters.

When ABC Family aired Ever After recently, I noticed how much Anjelica Huston looked like Cher.

At a certain point in time (pre-surgery?), these two resembled each other. Airbrushing may have had something to do with it, but I see it nonetheless. 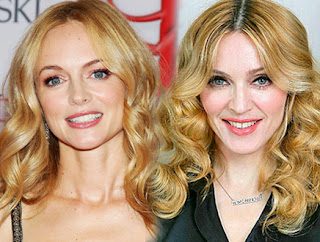 On the left: Heather Graham
On the right: Madonna

I've never seen Heather Graham and though, "Madonna!" or vice versa. However, there was a photo of Graham n some entertainment website that caught my attention.

I couldn't put my finger on it, but I knew she looked like someone else.

Then I saw Madonna's Harper's Bazaar cover at the grocery store and it clicked.

Madonna has proven she can completely change the way she looks with a quick hair cut or dye job, but as it is now, she and Graham look like sisters. The curly blonde hair probably enhances the similarity, but those bright blue eyes 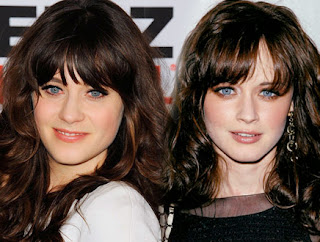 On the left: Zooey Deschanel
On the right: Alexis Bledel

Okay, I told you I saved the best for last. Who else sees it? To me, these two look almost exactly the same. I didn't notice it until recently, when I saw Deschanel in a Time Warner Cable commercial that aired during a rerun of Gilmore Girls.

The closeness in their ages helps make them look the same, but the hair, the eyes, the bone structure -- it's all there!

Deschanel has been compared to Katy Perry before, which I can see, but Alexis Bledel is her true celebrity look-a-like.
Posted by Batson at 6:37 PM