After a break from the sweetness last week, I'm back, sampling a few more of Charlotte's cupcakes. 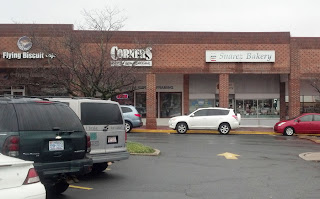 I went to Pineville and on the way back, driving North on Park Road, so I stopped in at Suarez Bakery. It's located in a strip mall at the Park Road Shopping Center. It's actually kind of hard to find because it blends in.

I parked right in front of it, but had to look around for a while to find it. The name on the sign is a little bit faded, which doesn't help. The location is easy enough to get too, but from my experiences with the Park Road Shopping Center, it can be pretty crowded at times, so you may have to park and then walk a little to get to the shop.

Suarez shares the shop with Tizzerts (can you guess which cupcake shop I'm going to try next week?).

The Tizzert cupcakes do have a more artistic look than the Suarez cupcakes, but in case you can't tell which is which, they have signs in the display cases, indicating which bakery made the cupcakes.

They didn't have a huge selection, but there were probably between 6 and 12 different flavors. I went with the Salted Caramel Macchiato – a devil’s food cake with coffee and Fleur de sel caramel filling, topped with Fleur de del caramel whipped cream. In case you’re like me and have never heard of Fleur de sel, I checked out the Wikipedia page already.

It means “flower of salt” in French. The Wikipedia entry reads: “It’s a hand-harvested sea salt, collected by workers who scrape only the top layer of salt before it sinks to the bottom of large salt pans.” 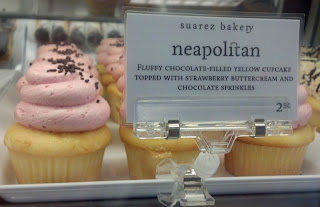 I was set to pay for the Macchiato cupcake, but then I saw a Neapolitan cupcake as well. It was described as a fluffy yellow cupcake, filled with chocolate, topped with strawberry buttercream and chocolate sprinkles.

I like the Neapolitan ice cream bars, but the idea of a Neapolitan cupcake? It intrigued me. I wanted to see how well the chocolate, strawberry frosting and the yellow cake blended together.

Surprise, surprise -- I got that one too. 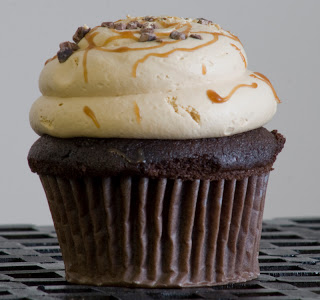 I tried the Salted Caramel first. The cupcake was tasty enough, but the frosting left a lot to be desired. First of all, there was too much of it.

You can't just cut a piece of the cupcake and eat it. You pretty much have to mash the frosting down and mangle the cupcake to get the right proportions. If you don't, you'll probably be left with a big glob of frosting on your plate when the cupcake is gone.

That may not be a bad thing in most cases, but unfortunately the frosting didn't have a lot of taste. The frosting was very plain. 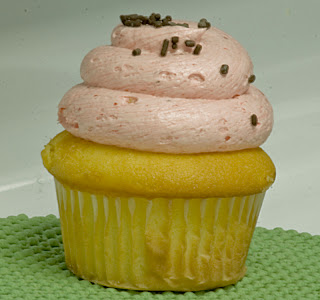 It was the same thing with the Neapolitan. The frosting didn't overwhelm me with a great burst of strawberry flavor, like I was hoping. It was very, very fluffy.

If it had more flavor to it, it would've been good. Thankfully the cupcake tasted great. Honestly it didn't even need frosting. It was that good!

The negatives: there was too much frosting on both cupcakes. The frosting was bland, so it didn't help take the cupcake from being "good" to being "amazing!"

Cost: I paid $2.50 for each cupcake. That's $.50 cheaper than most other cupcakes in Charlotte.