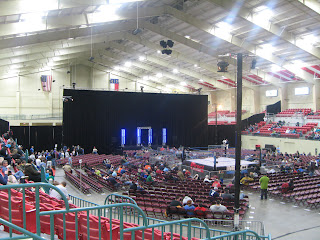 As WWE is gearing up for Wrestlemania, TNA is preparing for Slammiversary. With their new pay-per-view model, Slammiversary is the next big pay-per-view TNA has -- but it's not until June. We'll see if that new model generates any additional interest or buys.

Saturday night they were in Concord, North Carolina for a live event.

For $16 (I didn't bother trying to get floor seats), it doesn't matter what event they're gearing up for or how many pay-per-views they have. I'll buy a ticket.

I went to a TNA live event in 2008. I got to help out at a different live event in 2009, clearing the broken table (courtesy of Team 3-D) from the ring and taking the photos for the fans as they posed with A.J. Styles in the ring after the event.

This time, I wasn't wanting to meet the wrestlers or network with anyone. It's just something to do on a Friday night for a relatively cheap price.

I've been reading spoilers and catching bits and pieces of Impact on YouTube and through forums, but I haven't seen a full show of Impact, Raw or Smackdown in over a year, so seeing some people like Wes Brisco and Kenny King actually compete was new to me. As a pretty hardcore wrestling fan, I was familiar with both names (I remember watching Kenny on Tough Enough), but I hadn't actually seen them wrestle before.

Christy Hemme -- who is ironically the first Diva Search winner and the one who's lasted the longest -- handled ring announcing duties for the night. She's a confident girl, so she did a good job at hyping the crowd, but she's no Lilian Garcia.

The first match was for the X Division Championship. Zema Ion, who I'd seen on Impact about a year ago, faced Kenny King. Zema was doing the hairspray gimmick, excessively spraying his hair during his entrance and before the match began. There were a couple of comedy spots with the hairspray at the beginning of the match -- with Kenny spraying his own shaved head and the head of referee Brian Hebner.

It was kind of an uneventful match, but halfway through Zema turned it on, playing to the crowd and selling like a champ. Kenny King's story should be one of success. He got cut from Tough Enough, worked in ROH and is now in TNA. Unfortunately he doesn't seem to have much charisma, nor does he have the athleticism of someone like Shelton Benjamin, who makes up for any lack of charisma with outstanding moves.

King won with a decent finisher, but the best part of the match was the seven-year-old kid behind me who was trying to get a "Let's go Zema" chant going.

The next match was for the Knockouts Title. Velvet Sky was defending against Gail Kim. Velvet let the pigeons loose, which resulted in the little boy behind me calling her "Butt girl" throughout the match. 'Let's go butt girl,' is not a chant I ever thought I'd hear someone try to start. Velvet -- obviously not on Gail's level as a wrestler -- has improved, so it wasn't as bad as your typical televised WWE Diva's match.

Wes Brisco was out next to face Christian York. I'd been reading about Wes Brisco since the Aces & Eights storyline started. I've been reading about York since the late 90's. I'd never seen either of them wrestle though, so this was the match I was probably looking most forward to. Both men are more jacked than I figured they would have been.

York was a natural in the ring, with an RVD-like style, utilizing speed, agility and some technical skills. Brisco seemed a little more uncomfortable and a little more unnatural in there. That being said, he seems like he could be good with more seasoning. There was one flub near the end of the match (looked like it was Brisco's fault), but it wasn't a blown spot -- just a little sloppy. Brisco ended up winning after what looked like what was going to be a neckbreaker, but ended up being a knee to the face. It's a hard move to describe, so if you're a fan, you'll have to keep your eyes open for it. It's a decent looking trademark move, but I'm not sure it's entirely believable as a finisher.

Up next, Magnus and Samoa Joe were out for a tag match. To my surprise their opponents were Bobby Roode and Austin Aries, the TNA Tag Team Champions. When I quit watching wrestling on a weekly basis in early 2012, Aries was in the X-division, quickly working his way up the heavyweight ranks and Roode was the TNA Heavyweight Champion. Now they're the tag champs.

All four guys have had, are having or will have successful careers, but it was easy to see -- from the entrance alone -- that Aries is the shining star. Roode spent a good amount of time arguing with a fan during the entrance. Aries, noticing the delay, came over to see what the situation was. He grabbed the mic and elaborated. The fan -- a middle-aged man -- was apparently was telling Roode that Sting will come down from the non-existent rafters of the very small Cabarrus Coutny Events Center and beat Roode up. Aries asked, "Does anybody see Sting up there?"

In all fairness, the guy looked like he may have had some kind of mental disability.

Nonetheless, Aries heeled it up and made fun of the notion of Sting being in the rafters. Then, after he was done he told them to cue the music again because they weren't done making their entrance.

The match was probably the best of the night with lots of back and forth action.

Up next was a lengthy intermission. It felt like 20 mins...had to be at least 15. 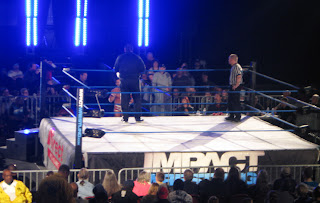 Joesph Park (who I last saw as Abyss) came out in a Simon Dean-like gimmick, wearing a sweat suit and carrying towel, waving to the fans the entire way. Robbie E. was his opponent. Before the match started Robbie E. wanted to know if Joseph Park really thought that "hamster" could dance better than him. So, we had a little dance off that ended with Robbie taking a cheap shot.

Fans immediately started chanting, "Black Hole Slam." So much for the Joseph Park personality. Just bring back Abyss! Park ended up winning the match after a lackluster splash from the second rope.

Instead, TNA combined the two, creating a tag match that put Kurt and Hardy against the reunited Team 3-D, who entered through the crowd.

It was an alright match. Kurt didn't seem on his game, which makes sense since he was apparently working injured (that also explains why it was a tag match). Jeff and Bully started the match. Kurt tagged in and got worked on until Jeff made the hot tag, hitting the Whisper in the Wind. The ref went down, which gave D'Lo, Brisco and Devon the chance to interfere. 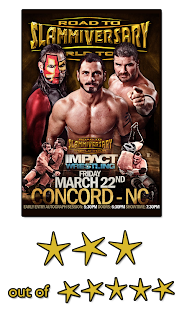 After Devon nailed Hardy with a chain, Bully made the pin for the three count. Magnus, Joe, Joseph Park, York and Zema Ion rushed the ring to save Angle and Hardy from a further beat down.

Bully teased a big tag between all of them, but said, "Screw it!" instead. The faces posed and that was a wrap. It was a shorter event than I expected, but maybe that's because the two singles matches turned into a tag.