I was told by a friend of mine on Twitter that Iron Man 3 stopped being cool on Sunday. True, I was not one of the many people who saw it opening weekend, but better late than never right?

The third installment in the Iron Man series (and the sequel to The Avengers) was definitely very cool!

I wasn’t sure what to expect, but I had high hopes after the first two Iron Man movies, Thor, Captain America and The Avengers. Marvel has been on a role the past few years, so I was hoping they’d deliver a kick-ass movie in order to keep that momentum going.

Based on the one trailer I saw for Iron Man 3, it seemed that Tony Stark faced a threat like never before. The preview I saw showed some of the Iron Man suits getting blown up.

It wasn’t all explosions though. In fact, perhaps more than in the previous Iron Man appearances, this movie had a back-story, characters with different allegiances and goals, and some unexpected turns along the way.

Speaking of characters, I was pleased to see that Happy (Tony Stark’s bodyguard from the first two movies) had a larger role in this one.

He’s not just there for a few laughs.

This time Happy is an important character in the plot development.

He still delivers some humorous moments though.

It was a little eerie in all honesty. Although Kingsley did a great job in his portrayal, I think the eeriness was mostly due to some good editing.

Throughout the movie, there were a series of PSA-style terror videos that talked about bringing terrorism to America. They used images of war throughout those videos. The Mandarain was also shown (using handheld, grainy video) assassinating victims.

If it sounds like this Iron Man was a little darker, it was. Tony Stark wasn’t just dealing with keeping Pepper Potts safe and fighting off the new round of foes. He was dealing with anxiety attacks after the events that unfolded in The Avengers.

I was really impressed by that. Never before has any movie studio been able to tell individual stories, while simultaneously setting the stage for future movies and remembering the details (large and small) of the previous movies.

Star Wars didn’t even do that and it was supposed to be a six-part series.

There was also a nice balance of new and old in Iron Man 3.

This sequel was filled with all kinds of innovative technology. Tony Stark has new weapons and gadgetry in his arsenal.

There are lots of new fight sequences too. A lot of those sequences involved Tony Stark, outside of the Iron Man suit, too.

None of those scenes left me amazed, but I don’t have any complaints either. After all, I don’t think the nearly-50-year-old Robert Downey Jr. will ever be a bona-fide action star.

He’s done a great job as Iron Man, with the help of computer animation, and as Sherlock Holmes, with some slow-motion film effects, but I don’t think he’d be able to secure a spot in The Expendables 3 with his fighting skills.

Director Shane Black evolved the Iron Man series with the fancy, new gadgets and thought out fight scenarios, but he kept the same sarcastic lines that makes the big-screen version of Iron Man one of the most comedic super heroes there is.

Only in Iron Man could you get a reference to A Christmas Story and a nod to the PBS hit Downton Abbey.

It really is the ideal role for Downey because he delivers the portrayal of Tony Stark flawlessly.

After being left out of The Avengers, Don Cheadle returns to the fold as War Machine.

Scratch that – he’s renamed “The Iron Patriot,” complete with a spangled paint job.

It’s something you’d expect out of a Captain America/Iron Man mash up.

This new look and new name gives Stark a lot of material for jokes throughout the movie.

The only real setback in this movie was the addition of Guy Pearce.

He wasn’t nearly as good a villain as Sam Rockwell was in Iron Man 2.

His entire performance was kind of generic.

Years from now, when people look back on this period of awesome live-action Marvel movies, he’s not a character people will be talking about.

I guess Pearce gets the job done, but I wasn’t impressed.

Stan Lee made another cameo, which was nice. Not his best cameo, but better than his sighting in The Avengers.

I have to wonder if there will be an Iron Man 4. I haven’t read up on what the possibility is of that happening, but after watching this movie, I got the vibe that there may not be.

There was an appropriate conclusion at the end of Iron Man 3, so if it is the end of the individual Iron Man movies, it’s not a bad ending. 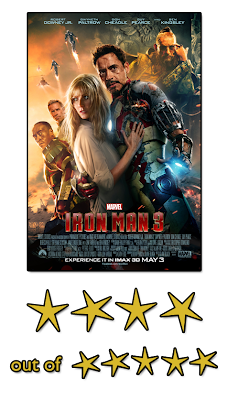 Don’t fret though. Tony Stark will be back in the second Avengers movie. In fact, Marvel wanted people to know that because, after the credits (and extra scene), they had a message to share.

In large white font, against an entirely black screen, they flat out said: “Tony Stark will be back.”

Whether or not Tony Stark will be played by Downey remains to be seen.

Obviously, I haven’t seen Thor: The Dark World or Captain America: The Winter Soldier yet, but after seeing Iron Man 3, Disney and Marvel already have my ticket for The Avengers 2.