This week I did something a little different. I got some ice cream cupcakes.

I got them from Maggiemoos, in the University area. Oddly enough, Maggiemoos seems to be the same company as Marble Slab.

They didn’t have a lot of selection to choose from, but I got the Cookies and Cream four-pack.

At first bite, there was almost a mint taste to the cupcakes – something I liked.

After the mint taste disappears, the whipped cream (kind of a less fluffy version of Cool Whip) takes over. 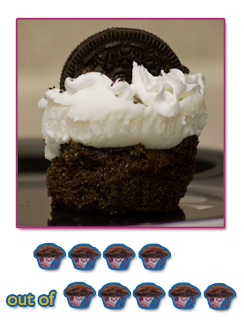 Then comes the Maggiemoos ice cream, which reminds me of a delicious dish from Dairy Queen. It’s very plain, but very good too.

Finally it’s a firm portion of chocolate cupcake that finishes off the taste.

As if the combination of cupcake, ice cream and whipped topping wasn’t good enough, there’s a soft Oreo cookie on top, along with a few cookie crumbles.

None of the flavors are exceptionally tasty, but when they’re all added together, one really can’t complain.

Find a Maggiemoos location near you

The positives: Ice cream and cupcake is always a winning combination.

The negatives: not too much to complain about on this one. The tastes could have been a little better, but with so many flavors and textures, it didn't much matter.