I haven’t posted to this blog for a while, but I wanted to say something about Chyna after hearing the news about her death this past week.

Besides super heroes and comic books, I am a big fan of professional wrestling. I started watching wrestling in 1997, when a lot of the wrestlers became real-life super heroes to me.

Characters like The Undertaker, Mankind, Goldust, Bret Hart and Shawn Michaels were all incredibly entertaining to watch. They had amazing entrances and awesome outfits, they battled each other and they did it in front of rowdy fans every week. All of those guys were incredible to watch!

It was great for me because I was at the age where I'd grown past cartoons like He-Man and X-Men (at least on a regular basis), but I wasn't interested in adult shows like Law & Order or Friends or The Practice.

Dozens of big-screen comic book movies weren't being made at that point, so there wasn't a happy medium until I found pro wrestling. It involved exciting stories and characters and feuds, yet it was involving athletes. Talk about a great blend for a male pre-teen!

Along with the 60+ male wrestlers in WCW, ECW and the WWF at the time, there were a few women involved as well -- like The Nitro Girls, Sunny, Sable and Marlena. Out of all of them, Chyna stood out the most. She wasn't slapping someone at ringside or dancing in the ring. She was body slamming Goldust on the steel ramp and punching Bret Hart in the face.

It was like Wonder Woman had jumped right out of the pages of a comic book. Other than Xena (Lucy Lawless), there wasn't a woman like that on television. I had no interest in the Xena or Hercules TV shows, but I was hooked on wrestling and Chyna's ever-intruiging character was a big reason why. 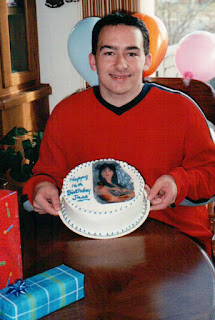 Knowing how much of a fan I was of hers, my family even put Chyna's photo on one of my birthday cakes.

My family members teased me a little bit about being a fan of hers. After all, she's a big, muscular chick. Not exactly your typical bombshell or pinup girl, right? But I thought the muscles were cool. She mainstreamed her look and got implants (and she did look even better), but I thought she was pretty awesome before the surgeries. She was doing something different, which made her hip, cool, and, yep, attractive. Never before had a bodybuilding female come in as a bodyguard for a male wrestler.

Jacqueline was a very physically-involved manager in WCW, beating up on Kevin Sullivan's opponents, but Chyna was doing it bigger and better.

She crossed over the way very few others were able to do, appearing on shows like 3rd Rock from the Sun, The Tonight Show, and Regis and Kathie Lee. Chyna was once considered freakishly large and scary, but eventually she won over the fans and became a insanely hot commodity in WWE.

One of my favorite periods was when Chyna was managing Eddie Guerrero. Their on-screen chemistry was great, becoming one of the highlights of Raw and Smackdown each week.

As any fan of hers knows, Chyna went through some struggles after she parted ways with the WWF when Triple H's romantic relationship with Stephanie McMahon was revealed.

She went on and wrestled in Japan, making history for New Japan Pro Wrestling in an inter-gender match with Masa Chono, but, despite improving her in-ring repertoire, the matches she had in Japan weren't as readily available, worldwide, as WWE was.

I still have the VHS tapes of her various television appearances on Sabrina the Teenage Witch, Whose Line Is It Anyway?, and a handful of other lesser-known shows/movies that most people probably haven't even heard of. Despite her efforts to succeed in acting, she became more well-known for her volatile relationship with Sean Walkman/X-Pac and her drug and alcohol issues.

After pretending she didn't exist for almost a decade, WWE started to sprinkle a little bit of Chyna into their content, mentioning her on a few WWE.com articles or putting a quick clip of her in a few video montages of WWE Women's Champions. Then they event mentioned her on an episode of the Monday Night Wars.

Chyna seemed to be getting her life together after the move to Japan, too -- at least it appeared that way in some of her videos on her YouTube channel. She was focused on the culture in Japan and teaching English and making smoothies and doing yoga. It seemed like that engagement in social media, even in the smallest form, sucked her back into the wrestling business.

I always had hope that she'd end up in the Hall of Fame (as any fan knows she should be). Steve Austin had enough guts to mention the possibility directly to Triple H's face on a live WWE Network podcast, too. You can form your own opinion on Triple H's politically correct answer, but that response prompted a Vince Russo-Chyna interview that may have hurt Chyna's chances on getting into the Hall of Fame rather than helping them.

She came back to the United States on a mission: to get into the Hall of Fame. She tried to get a few hashtags trending on Twitter and agreed to do a documentary where cameras would follow her for a year as she tried to get her life back together.

I had my worries about Chyna coming back to the U.S., when she made it clear in her YouTube videos from Japan that being away from the mainstream media helped her recover from a time where she was once suicidal.

She was back, though, like it or not. She reconnected with wrestlers like Mick Foley and Bret Hart and started accepting bookings for various conventions.

She made a few new smoothie videos on YouTube, but she seemed to have lost a little bit of the positive vibes she had while in Japan --- from my perspective anyway.

Still, I was happy to see her back in the wrestling spotlight a little bit. She ended up appearing at a local science fiction convention just a few weeks ago. I got the chance to chat with her for about five minutes.

I wasn't sure how many people would be in line at this convention or how long I'd have to talk to her, so I bought a greeting card and wrote her a message, thanking her for some entertaining memories, telling her to stay strong and asking her to keep making those smoothie videos. 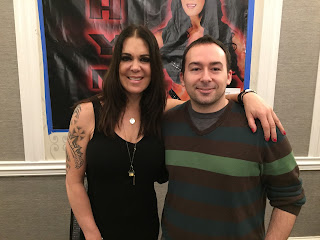 As it turns out, Al Snow, Buff Bagwell, Kevin Nash and Chyna were all at the convention at booths that were right next to each other. I paid for an autograph and photo opp with Chyna, but there weren't too many people there at that point, so I also had a few minutes to chat with her.

Chyna was very nice and bubbly. She was smiling throughout our conversation and laughed at the mention of the smoothie videos, chuckling that she wasn't sure what the appeal was, but that fans liked them.

Now, of course, I wish I would've had the confidence to chat a little bit more, but I wasn't sure how long I should stick around without being a bother. 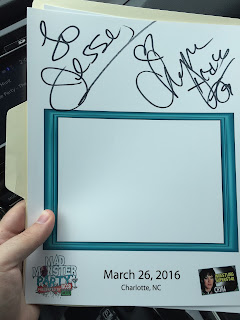 I'm very grateful that, while she signed an autograph for me, I had the chance to tell Chyna, in person, that I thought she'd end up in the Hall of Fame one day.

I got to tell her 'thank you' for the years that she wrestled and the entertainment she provided. I"m glad that meeting her was a positive experience because so many people have awful stories when they finally meet their childhood heroes.

Like I said before, any true wrestling fan knows the impact she made and, despite her personal struggles, can appreciate that.

It's unfortunate that she died before people voiced their appreciation for her contributions to pro wrestling, but it was uplifting to see so many positive comments on Twitter for a woman who was the recipient of some very critical and mean comments in the past via social media.

It was heartbreaking to see comments from people who knew her very well during her days in the WWF, like Terri Runnels, Mick Foley, Goldust and their children: Noelle Foley and Dakota Runnels.

It was refreshing to see so many wrestling legends paying her respect -- legends like Steve Austin, Shawn Michaels, Hulk Hogan, and even The Rock.

If you haven't seen any of the comments yet, there's a nice write-up on this PWInsider page.

I did find WWE's various responses a little bit 'corporate,' but the fan in me was happy to see them forced to acknowledge the woman they have ignored for the better part of a decade.

When it comes to the WWE Hall of Fame, Chyna is more than deserving. In a way, I hope WWE doesn't induct her because it's a flat out insult that she wasn't inducted while she was still with us here on Earth. However, the fan in me wants her to get the recognition she deserves and a spot in the Hall of Fame would do just that.

As a fan for almost 20 years, I'm obviously saddened to see the news that Chyna died this past week. However, I'm happy that she's finally found the peace she sought after for so long.

Rest in peace, Chyna. I always enjoyed being a fan of yours and it was very nice to meet you. 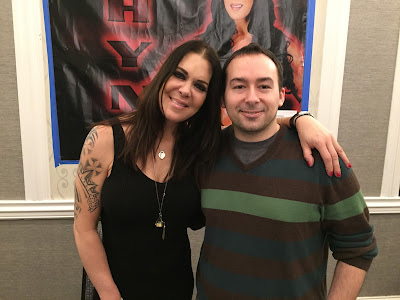 • 4 pivotal questions that will be answered at Wrestlemania 30
• My Wrestlemania vs. The Real Wrestlemania
• The top 10 free agents Jeff Jarrett should sign if he starts a new promotion