Alright, after going over casting choices for Teela, Beast Man and Man-At-Arms the past three days, it's time to take a look at Mer-Man --- another of Skeletor's henchmen.

Given his prominent status among Skeletor's ranks, I feel that he should be included in the new He-Man movie.

Mer-Man got jipped the last time around. Evil-lyn and Beast Man both made it into He-Man's 1987 big screen debut --- even if Beast Man looked more like Grizzlor than Beast Man.

Now, in terms of the version that should be produced, there are pretty much two to choose from and both are similar. There is the Filmation version and the 2002 Mike Young Productions version.  There aren't a ton of differences between the two, but I'd much rather see the 1980's version.  The 2002 version (and mini-comics version, at times) looks too much like a duck.  The Filmation version really does look like a man-fish or a Mer-Man. 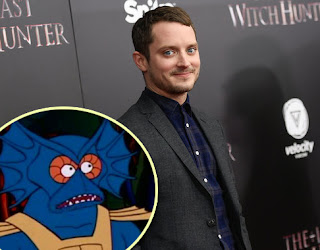 So, who to play Mer-Man?  The first name I'm going to throw out there is Elijah Wood.  I'm not entirely sure why, but he seems like an actor who could do well in a villainous role like Mer-Man.

He was Froto, of course, but, thanks to the ring, he was emo during half of that trilogy, so he could probably handle playing a convincing villain.

Wood is, by no means, a large man.  However, Mer-Man was never really a physical villain.  He was usually more underhanded and sneaky or he'd utilize weapons.

I always felt that Mer-Man was more of an analyst who capitalized on certain moments than he was a physical specimen or evil warrior.  I don't know what kind of salary Elijah Wood commands these days, but he does have some name value, so he's probably worth the price.  Elijah would get the nod from me. 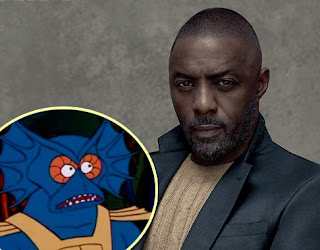 Okay, this one is probably unlikely, but Idris Elba is someone I wouldn't mind playing Mer-Man.  He's probably more focused on getting that coveted James Bond role than he is on a He-Man movie that is seemingly destined to be in the pre-production stage.

Mr. Elba has already portrayed Heimdall in the Thor movies, so it seems he's not opposed to being in a superhero movie franchise.  While he's got great presence as Heimdall, Elba's talents seem a little bit wasted in that minimal role.

I'd hope that his role as Mer-Man would give him a little more screen time than he's received as Heimdall.  Hopefully he'd have a few more combat scenes as well.  He seems to have the physical ability to do some cool action scenes.

The nice thing about Elba is that he's a big name, but he's not a massively big name.  He hasn't headlined his own box office film yet, so he'd hopefully be within the studio's budget to get.  After seeing what he could do with a minimal role in Thor, Elba could make the Mer-Man character a standout. 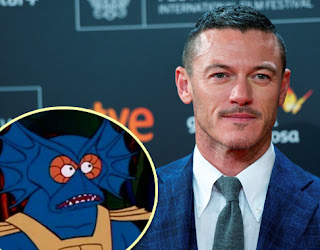 Someone who is kind of along the same lines as Idris Elba --- having made a bit of a name for himself in recent years --- is Luke Evans.  He was a fairly prominent character in The Hobbit trilogy before going on to star in the not-so-successful (but surprisingly good) Dracula Untold.  He was also in Furious 7 and is Gaston in 2017's live action Beauty and the Beast.

I'm not sure if he's too big of a name for the Mer-Man role, but I don't think so.  Just like Elba, I think he'd bring some attention to a role that has never been on the big screen before and was kind of underrated in the TV series.  The acting ability isn't really anything you'd need to worry about.  He's played a variety of characters already during his rise to prominence.  A villain in a He-Man movie would be within his wheelhouse.  It probably won't happen, but Luke Evans would be a great choice for Mer-Man. 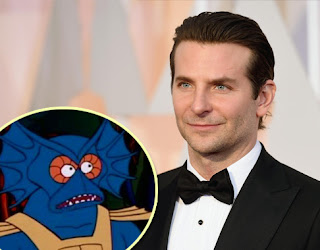 Lastly, I'm going to throw Bradley Cooper's name into the mix.  He's probably the most recognizable name on the list.  He's a talented actor, having starred in his fair share of dramas, but he's clearly got a sense of humor.

Cooper starred in the Hangover movies and he's the voice of Rocket in the Guardians of the Galaxy movies.  He's not above doing a little bit of superhero acting to make that box office buck.

I can't recall many full-on action movies that Cooper starred in, but, like I said earlier, Mer-Man isn't Beast Man.  He doesn't need to be a musclebound, dominant villain.  Mer-man is an entertaining character.  Cooper needs to bring interest and entertainment to the role.  I think he could definitely do that.